Samsung introduced an update to its Samsung+ customer support app this week with a number of notable upgrades — including a feature that gives Samsung tech support representatives remote access to operate and troubleshoot a device.

The Samsung+ app launched in the U.S. last year, replete with in-app video and text chat, a built-in telephone support feature, FAQs, and diagnostics, all designed to help customers circumvent issues they’re having with their phone or tablet. With the latest update, not only has the app been given a complete makeover and expanded to offer support for electronics — such as TVs and home appliances — but with Samsung Assist thrown into the mix, it’s clearer than ever that the Korean tech titan is trying to replicate a physical support environment similar to that of Apple’s Genius Bar. 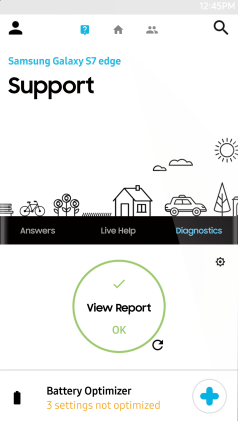 For now, Samsung Assist is only open to Galaxy S7 and Galaxy S7 edge owners in the U.S., but other Galaxy-branded devices will receive the feature through carrier updates in the coming weeks.

While there is no shortage of remote-access apps out there already, Samsung’s decision to bake such a feature directly into its main customer support app represents a notable evolution. So now you can be talking through a technical glitch with a Samsung rep “face-to-face” on video chat, and, rather than explaining the remedy, the rep can take control for themselves (with the user’s permission).

While Samsung has some way to go before it can replicate Apple’s physical presence — which includes dozens of retail stores and genius bars across the majority of U.S. states, it has been pushing its support credentials with initiatives such as Samsung 837, a New York-based “digital playground” that offers hands-on time and technical support for Samsung products.

This is a costly and time-consuming initiative to scale in the real world, however, so offering a version of this virtually, through a dedicated app, could be construed as the next best thing. It’s also worth noting here that the Samsung+ app now provides support for other Samsung-branded home appliances. This means that the next time you’re having difficulty figuring out your new smart TV, you can request help from the experts directly through your phone.