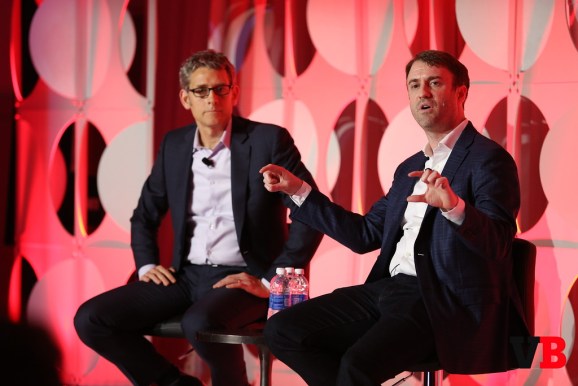 Machine Zone, one of the top-ranked mobile game companies, said it is launching a platform today that lets other companies license its cloud technology to enable many millions of people to communicate and interact in real time.

The company, which makes the hugely popular multiplayer Game of War, said it is also renaming itself MZ. MZ consistently has two games in the top-five top-grossing list on the mobile app stores — a feat that is exceedingly difficult to achieve in the $34.8 billion mobile game industry.

Gabe Leydon (pictured above), founder and CEO of MZ, made the announcements today on stage at the VentureBeat Mobile Summit, an invite-only event for mobile executives in Sausalito, California.

“RTplatform is a massive platform for doing high-fanout data processing,” said Leydon, in an interview with VentureBeat founder Matt Marshall. “We hope to do many-to-many applications. This is an infrastructure that allows you to do some extremely large things in real time at scale.”

He said that Game of War can concurrently handle more than a million players in the same virtual place at once, and it can handle all of the messages and interactions that they do.

“Our new platform is 100 times bigger than that,” Leydon said. “It’s a new way of looking at real-time applications. I hope MZ and its legacy is to bring about the many-to-many Internet. The ultimate goal is putting everybody in the same place at once.”

RTplatform will be spun out into a separate division and borrow from what MZ calls its unique ability to interconnect “billions” of endpoints worldwide and transmit data at low latency.

MZ built the real-time infrastructure as the foundation for its mobile games, Game of War: Fire Age, and Mobile Strike. In these games, MZ has to balance huge numbers of simultaneous moves — such as attacking or defending bases — in order to keep players happy. The paying players spend an average of $550 per year, based on an estimate by Slice Intelligence.

But while MZ built this infrastructure for its games, it has the capacity to handle much more than those games require. And that’s why the company is finally making the move to license the technology to other companies.

The company’s infrastructure is much more scalable than what is currently available in market from rivals like Amazon or Google, MZ said.

The company said the service will appeal to any organization needing to deal with a massive number of communication points, from financial service companies to connected car companies to government institutions. Leydon said he isn’t sure yet if the company will serve other game companies. But even if MZ licenses the infrastructure to other companies, those companies will still need to build their own app, he said, so they wouldn’t be able to compete with MZ from day one.

MZ has built its technology to enable a million gamers to play at the same time, so that whenever a move is made, say by a player in Russia, it can be recognized and responded to in real time by another player located in Brazil. The data behind the moves can be transmitted, and translated, in real time, MZ said.

“We have always considered MZ a technology company,” said Leydon. “Our unparalleled cloud technology is what has enabled millions of people to concurrently play our games in a many-to-many environment — in real time, without limitation, in a single virtual universe. No other cloud platform has the real-time capability, capacity, or efficiency that we’ve developed.”

Indeed, Machine Zone’s ability to instantly translate 32 languages during real-time conversations between players while they are chatting within its games has long been considered one of its differentiating technologies. The company has also demonstrated the ability to make significant amounts of money from Game of War. That’s one of the top-grossing games, and it makes more money per user per year than any other mobile game, according to some estimates.

MZ said RTplatform enables the exchange of data between billions of endpoints worldwide.

The company said it will release further details about the technology and its first licensees in the “coming weeks.”

MZ has also debuted its new website at mz.com.