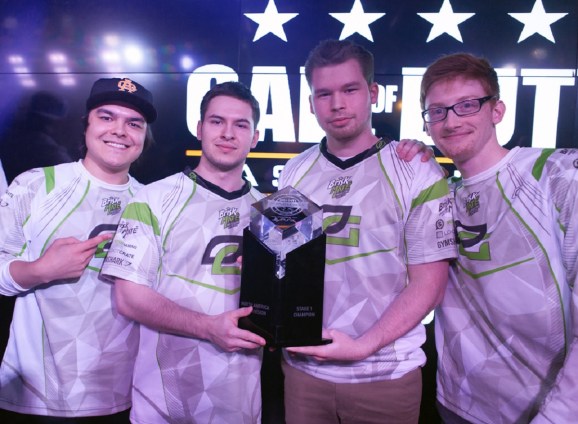 Optic Gaming won the finals of the North American Stage 1 Finals for the Call of Duty World League esports tournament.

Over the weekend, teams squared off at the ESL Studios in Burbank, California, to watch teams compete for the North American finals. The winner moves closer to qualifying for the 2016 Call of Duty Championship this fall to see who is the best in the world at Call of Duty: Black Ops III on the PlayStation 4 game console. The tournament is part of the esports craze, which is expected to grow 43 percent in 2016 to $463 million, according to market researcher Newzoo.

Optic Gaming battled for months to take the top honors for North America’s Stage 1 event. At the conclusion of the competition in the fall, the league will award $3 million in prizes to all of the winners.

“The First Stage of the CWL has featured some great gameplay, close matches, and some of the best competition that Call of Duty has ever seen,” said Rob Kostich, the executive vice president and general manager of Call of Duty, in a statement. “Call of Duty eeports has a strong foundation dating back to Call of Duty XP back in 2011, but the CWL has already taken it to new heights and we can’t wait to continue that growth during the Second Stage and the Call of Duty Championship this year.”

The top eight North American teams battled over the weekend. After falling behind Optic Gaming 3-0, Rise Nation fought back to force a winner take all game 7. Thousands of Call of Duty fans saw Optic Gaming emerge victorious as they were crowned Stage 1 champions in the first major tournament on the road to the Call of Duty Championship this fall.

“We know what we are capable of and that we are the best team in Call of Duty,” said Seth “Scump” Abner, captain of Optic Gaming, in a statement. “We haven’t always shown what we can do, so having this win under our belt is good for the rest of our season.”

Here are the final rankings for each CWL Stage 1 Pro Division region: