As great as some of the personal stories can be, dialogue or animation bugs (and perhaps an odd design choice or two) easily ruin what are supposed to be emotional situations. I lost count of the number of times I saw the same man and woman in different parts of the city bartering with each other; the woman always gives him the last half of her PowerBar. Another awkward moment occurred when I saw Rikers harassing what looked like two friends. The Rikers shot and killed one of them, but instead of running away, the other person stayed quiet and calmly walked into a building as if nothing happened.

The outcome of a specific side mission still bothers me. I had to find a missing woman who had a personal connection to Dr. Kandel, one of the main characters who works at the base. Dr. Kandel told me she was really worried about her. After about 30 minutes of searching, I found the missing girl alive and well.

The obligatory “mission complete” message popped up with all the promised rewards and experience points, but I heard nothing from Dr. Kandel. Not even a sigh of relief or a thank you. It was disappointingly anticlimactic. 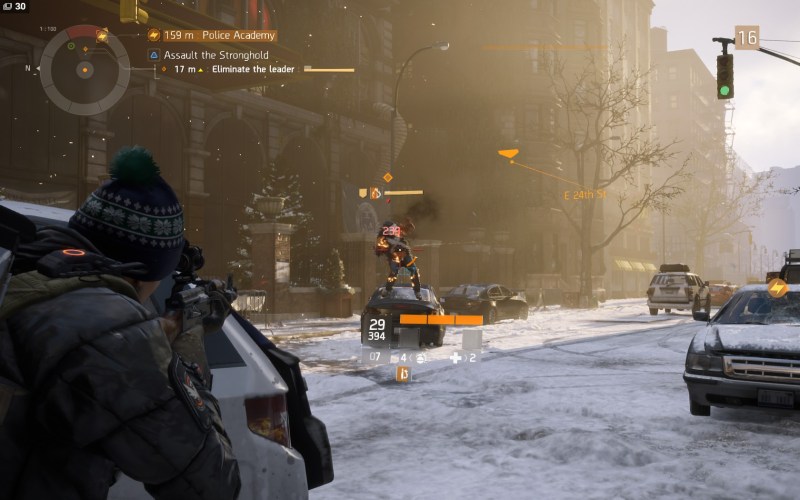 Above: Setting someone on fire is an excellent way to distract them.

Most of the fighting comes down to putting some distance between you and your enemies. It’s when the bad guys suddenly close that gap that The Division’s combat mechanics run into some trouble. Even with access to shotguns and handguns, I was useless if someone managed to get within a few feet of me. The one melee attack you have — shoving the butt of your gun into someone’s face — can temporarily prevent them from reloading or firing their gun. But it’s not strong enough to kill them unless you already softened them up with bullets beforehand.

Dodging wasn’t really effective, either. On the Xbox One controller I was using, rolling away and taking cover both use the A button. So when enemies surprised me up close, I’d blindly roll toward my monitor and sometimes wound up sticking to a wall or other piece of cover by accident. And then I’d take a ton of damage as I tried to get out. It doesn’t help that the time it takes to peel away from cover is just a split-second too long for these close encounters.

Instead of playing as a specific Division agent, you create your own character. One thing you can’t do, however, is make them speak. I didn’t mind this at first. But when I finished the story, it became clear that going with a silent protagonist was a mistake.

Division agents are seemingly ordinary people who don’t know they’re agents until the government activates them. The narrative gives some insight into their lives through two of the main characters, but their perspectives just left me with more questions. What happens to agents after a conflict is over? Are they allowed to return to their normal lives?

It’s an interesting psychological dilemma that The Division doesn’t really explore, and making your hero a mute removes any potentially cool storytelling possibilities. I want to know what my guy thinks of all this, what his job was before the virus hit, and if his friends and family are still alive.

It was weird to be in control of such a blank slate, especially because Tom Clancy games pride themselves on telling stories with some semblance of realism. A character who acts more like a Terminator than a person is way more unrealistic than any hi-tech gadgetry Ubisoft can come up with. 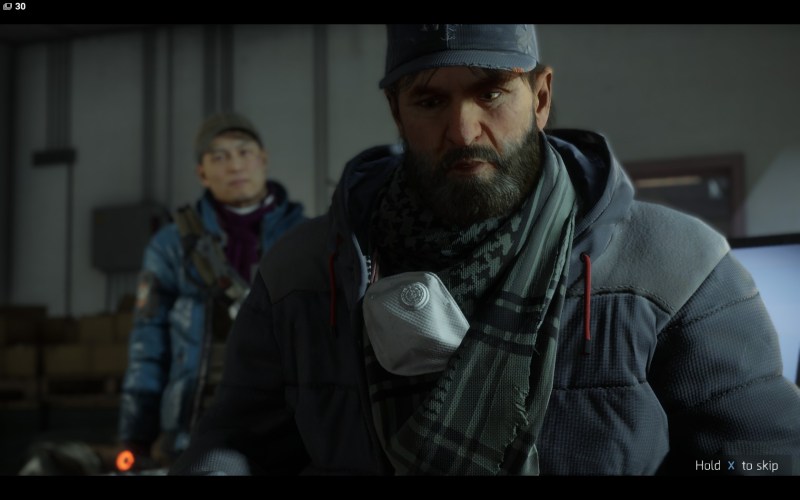 Above: Most cutscenes end up being one-sided conversations.

Waiting for your friends to catch up

If you plan on playing with your friends (up to four players can form a group), make sure you all stay within one or two levels of each other. Players at low levels will have a harder time if their buddies are significantly stronger than them. I found this out when I joined my friend’s group for the first time: I was level 29, he was level 19, and when The Division crunched the numbers to balance the difficulty, it started throwing level 24 enemies at us.

I actually found this kind of funny at first, but my friend had a rough time. He definitely wasn’t amused. The only way he could survive was by staying way behind me while I attracted the bad guys’ attention.

It’s hard enough to schedule a time when my friends and I can play together, so having to also worry about different levels just made cooperative multiplayer useless until we all hit the level cap (30).

The walled-off Dark Zone is The Division’s take on player-versus-player combat. In the story, it’s a no-man’s-land where the disease hit the hardest, a place that even Division agents couldn’t save. It supposedly holds some of the best loot in the game, but you’ll have to work for it: both computer-controlled enemies and real players populate the Dark Zone. Death is more punishing, too. When you die, you drop any new gear or weapons you might’ve found, leaving it open for other players to pick up.

Initially, the Dark Zone is great. It’s more dilapidated than the rest of the city, with noticeably more body bags and burned-out cars and buildings. It’s a scary place. The enemy factions tend to fight each other, so it’s not uncommon to suddenly stumble into a battle between dozens of high-level Rioters and Cleaners. If you’re going in solo, it’s hard to know which player you can trust. I’ve met plenty of people who killed me on the spot and took whatever money and loot I had.

But the more I spent time in the Dark Zone, the more I wondered if all the effort was worth it. To bring the loot back into the main game, you have to call in a helicopter to extract it. This alerts other players and enemies to your position, so you can easily be outnumbered and lose all your hard-earned items before the chopper even arrives. While I like the risk/reward aspect of that process, the problem was most of the loot wasn’t that good. Out of all the things I collected, maybe 20 percent was actually useful in upgrading my character’s stats; the rest I just sold or broke down for resources.

At level 30, it was almost impossible to make any meaningful progress by myself, so I used the matchmaking system to team up with strangers. It worked maybe half the time. Other people would kick me out of their groups (probably because my character was weaker than their guys), or the group would suddenly disband as the remaining players left, or I’d become the leader of a new party and have to wait a couple minutes for it to fill up.

Oh, and The Division also has a lengthy loading screen that pops up every time you join or leave a group. I could go on and on about how frustrating Dark Zone matchmaking can be. 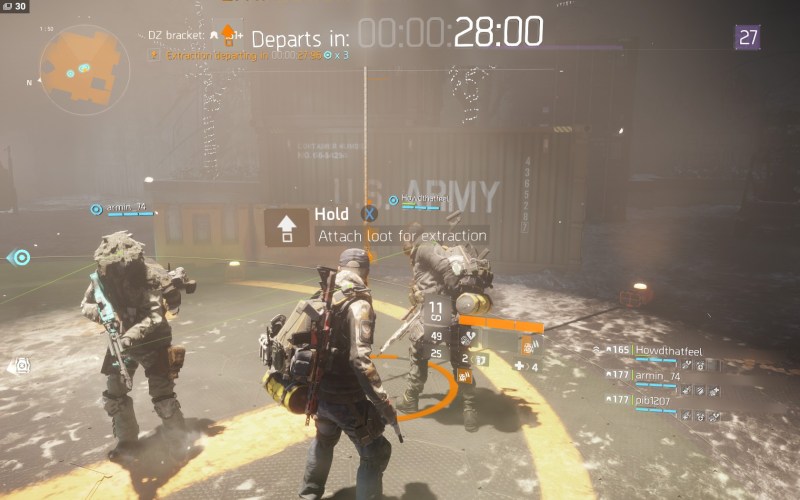 Above: Extracting supplies in the Dark Zone.

In spite of my emotionless hero, Ubisoft Massive’s dystopian version of New York City is absolutely gripping. It’s sprawling, tense, and dripping with cool stories. The Dark Zone had the potential to build on that atmosphere with the addition of real players, and in some ways, it succeeds. But I hated jumping through so many hoops just to find a team to play with. And once I was inside, the loot I extracted was underwhelming.

Making it worse is a rash of glitches that enable players to get powerful gear quickly and easily. This throws Dark Zone encounters way off-balance as those exploiters prey on the weak. I haven’t run into those people yet, but I can definitely understand why that’d be so maddening.

The Division is in a weird spot. While the story campaign is fantastic, the end-game content is disappointing, even without factoring in the hackers and the bugs. I still play the game a few times a week because I love being in that world. But I’m not sure how much longer that infatuation will last.

The Division is now available for PlayStation 4, Xbox One, and PC. The publisher provided GamesBeat with a PC code for the purposes of this review.