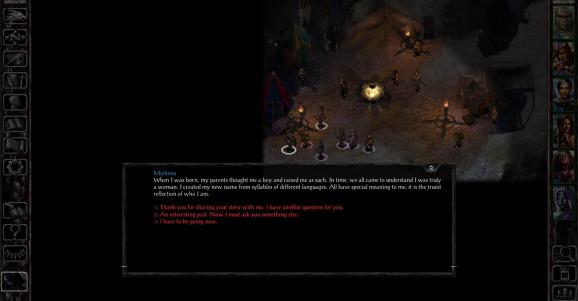 Mizhena is the transgender character in the new Baldur's Gate expansion, Siege of Dragonspear.

Last week, a gaming classic received an impressive new expansion, but its progressive take on certain characters is making some fans angry.

Last week, developer Beamdog released the Siege of Dragonspear expansion for Baldur’s Gate: Enhanced Edition, and some gamers are angry that it features a transgendered cleric as well as three-dimensional women characters. You can read about some of these themes in our positive review for the add-on, which is the first new content for the original Baldur’s Gate since 1999. But some fans of that original game are furious that Beamdog would expand the beloved role-playing world to feature more inclusive writing and characterizations, this has led to dozens of heated threads on Baldur’s Gate’s forums and a deluge of negative user scores on the review-aggregation site Metacritic and the Steam PC gaming portal.

The studio has spent the last several years updating the old Baldur’s Gate games, and it is now transitioning that into building new entries in the series. This is a niche business in the $99.3 billion gaming industry, and it’s one that could implode for Beamdog if a wave of hatred from reactionaries is able to successfully portray Siege of Dragonspear as a terrible game.

GamesBeat reached out to Beamdog, which is preparing a statement as of publication time.

The criticisms from the enraged on Steam and Metacritic primarily focus on two aspects of Dragonspear. Mizhena is a transgendered person, and the beloved ranger character Minsc makes a joke about the hate group GamerGate. The joke is a reference to the motto of GamerGate: “actually, it’s about ethics in games journalism.” Instead, Minsc says it is about ethics in adventuring.

But this has led to 142 people posting negative user reviews for the expansion on Metacritic. The vast majority of those have a score of “zero.” This has led to a 3.6 average out of 10. We’ve seen mobs use Metacritic and Steam reviews in the past to punish a game they don’t like.

In the reviews and the posts on the message boards, you’ll find some common themes. People hate that “SJWs” have “gotten their hands on” the Baldur’s Gate franchise. SJW stands for “social justice warrior,” and it is a pejorative term that some circles on the Internet use to describe people who push for political correctness. Some claim they are not fans of “poor” writing, but others are more direct:

“Can the transgender character please be removed so my daughter [can play],” reads one post on Steam. “I live in Turkey and our society frowns upon non-binary sexual relations and genders. Once, my daughter saw a transgender person (male to female) and asked me about the whole situation. It wasn’t easy to explain everything. She chuckled every time I tried to sound serious about the situation.”

Poor guy. He had to talk to his daughter about a serious issue.