The San Francisco-based company is adding its language category to its existing subscription service, which already has 50 games that are aimed at people who want to improve their health and wellness by exercising their brains.

The suite of five games was designed to introduce players to new vocabulary, surface etymological foundations, illuminate nuances of definitions, and facilitate practice using words in context. The games are available for preview on lumosity.com, and the company plans to add more language games and additional skill areas in 2016.

Beverly Chung, senior product manager at Lumosity, said in an interview with GamesBeat that the company started exploring the possibilities for new games during its 10th anniversary last year.

‘We took a step back and wanted to apply our learnings about adaptive learning and engaging games,” Chung said. “Where else could we apply that in complementary experiences?”

She added, “The language focus stemmed from users, who give us feedback every day. They wanted to practice language more.”

The new games take about one to three minutes to play, and they’re targeted at adults. You can learn new roots for words or drill on the ones you know. You can also learn to create words based on your knowledge of the roots.

With Continuum, you play a game where you drag and drop a word into a correct sequence within a sentence. Contextual is a game that tests your reading comprehension. Other titles include Word Bubbles (where you try to think of as many words with the same phoneme as possible), Editor’s Choice (where you quickly select synonyms for a word), and Taking Root (which tests on your knowledge of word roots).

The company soft launched the games with limited content in December. Now it has launched it more broadly with deeper game experiences on the web. The games are English only for now.

“We target words for everyday use by native English speakers,” Chung said. “Users will find the words relevant for their lives. Our expertise is in game design and getting people to engage quickly.” 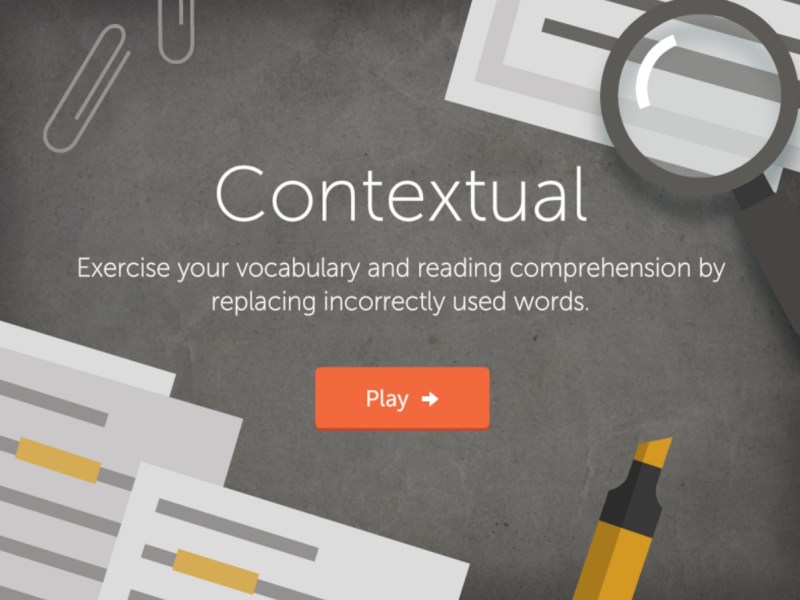 Chung believes that the new games are another form of gamification, or making it fun and engaging to learn something that could be really boring — by making the tasks more like games. Players reap rewards when they keep on playing. The games are for subscribers only now.

“Lumosity’s new offering provides adults of all ages with an accessible and fun way to practice language skills. I especially like that it provides playful encounters with words and patterns related to words,” said Judith Scott, associate professor at University of California at Santa Cruz’s Education department. She helped the team make the new language games.