The HTC Vive begins shipping today to people who preordered the virtual reality headset based on Valve’s Steam VR technology.

HTC and Valve hope that it will be the beginning of a VR renaissance that immerses us all with a feeling of “presence,” or the feeling that you are transported to another virtual place. This sense of presence is VR’s unique advantage, and if everybody is enthralled by it, VR could become a $30 billion industry by 2020, according to tech adviser Digi-Capital. But the market will be perilous. If VR developers create apps that make half the population sick from vertigo, this version of the technology will appeal only to a small niche of enthusiasts.

The Vive represents the high end of VR today, with an $800 price compared to $600 for the rival Oculus Rift. I’ve tried out both systems and have some impressions. You’ll spend this money in addition to a $1,000 PC, which has to be equipped with a graphics card like the Nvidia GeForce GTX 970 or AMD R9 290 or better. The high price, the significant hassles around setup, and the current limitations of VR technology mean that this will be a small enthusiast or early adopter market during this generation.

I haven’t seen any obvious killer app just yet, but at least two dozen games and demos are launching today for the Vive. I’ve played a bunch of these in demo form already, and they look surprisingly good when it comes to graphics. For the most part, they don’t give me motion sickness. But I’ve only had a few days to play around with the Vive, and that’s not nearly enough to check out the two dozen or so experiences. My sense is that the Vive is a better system than the Rift, but Oculus has an advantage because it has better content available now. 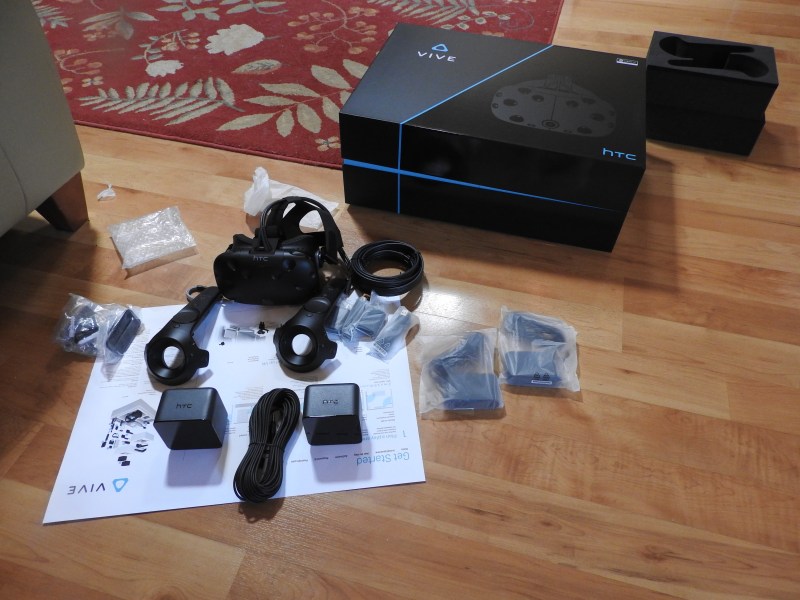 Above: Here’s what you get in an HTC Vive

The Vive has a setup process that is supposed to last just 28 minutes. I found that was true, but only the second time around. I had help from Nvidia installing the Vive Pre (the early version) on a new PC. That took a long time in part because they had to figure out where to place the sensors for the Vive’s tracking system. We set them atop two tall book cases and had to drill one into the top of one book case.

The sensors have to see each other. They have to be wired to electrical sockets, and they have to be connected to each other on a wire. HTC put indicator lights on them that turn green if they are functioning correctly.

After you unpack the box, you’ll find a lot of stuff to keep track of. Then you then go online to use setup software. You have to install Steam on your system or create an account if you don’t have one already. The Vive software auto-detected Steam on my computer, and I had to redirect it to a place on a hard drive that had enough space for games.

You have to charge your controllers via USB cables, which are included. And you have to plug the Vive headset into a system link box, which in turn connects to USB and HDMI 1.3 slots in your computer.

When you finish loading the Steam VR software, you get a shortcut on your desktop for it. When you click on it, you will see an image with a headset, two controllers, and two base stations. If all of them are green, you are in business. Then you can look through Steam for various VR demos, or you can shop for full games on the Steam store. Once you buy a game or download a demo, you simply click on it to load it.

You have to know a little bit about your computer to be able to do all this. But it’s nothing that the tech geek in the family can’t handle.

Valve has also created a few fun demos that play when you first use the Vive. They show you how to set up your space for “room scale” VR, how to use the controllers, and now to navigate through the story with the headset on. It’s all pretty simple stuff.

The Vive’s advantage over Oculus 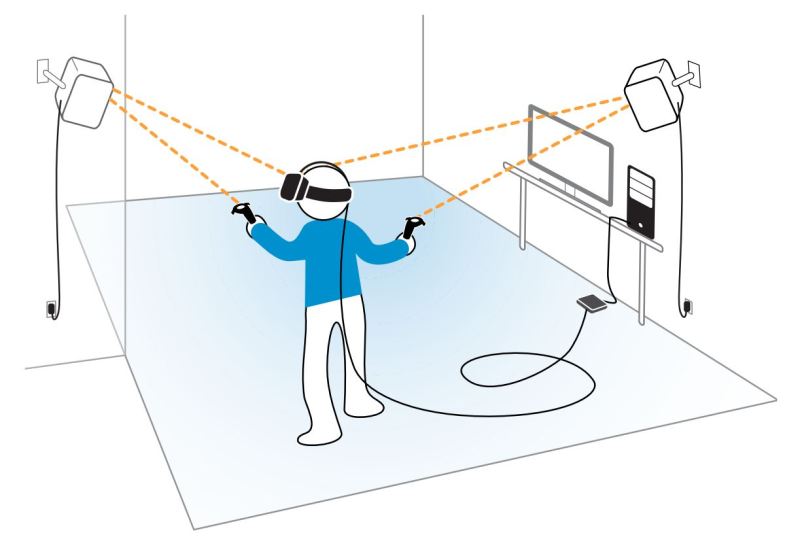 One of the best things about the HTC Vive is that it supports “room scale” VR. This means it allows you to set up a space in your home that is 15 feet-by-15 feet. The Vive’s two base stations, which you set up at high points in a room, can sense the space in your living room or office and map out the safe space where you can play. This way, you won’t trip over your own furniture while you are wearing the headset. And any time you come near the border of this area, you see a grid of blue walls appear before your face. That makes the HTC Vive safer.

You don’t have to have a room that is that big. The Vive setup process allows you to map your available space, using the hand controller. And that space can be as small as 5 feet-by-6 feet. And if you can’t do that you can also opt to just sit in a chair and play, as is appropriate with the Oculus, which doesn’t have the base stations. The Oculus has one sensor and it has a play area of 5 feet-by-11 feet.

Space Pirate Trainer, where you shoot at drones coming from a variety of directions, is one of the games that you can play in a small space or a larger one. It’s better in the larger space because then you can more easily dodge incoming attacks. Fantastic Contraption and Tiltbrush are apps that benefit from a larger space, as you can pull back and see your creation from a broader view.

Those Vive base stations are small and compact, but they’re a bit of a pain to deal with. They have to be wired to an electrical outlet, which I accomplished using two extension cords. But they also have to be wired to each other. HTC provides a long cord for this purpose, but it’s annoying to string this along near the top of your ceiling to connect the base stations.

The Vive has Oculus beat in one obvious way. Right now, you have to use an Xbox One controller to play with an Oculus. You’re pushing buttons for now, until the Oculus Touch controls arrive later this year. But the Vive is already equipped with two handheld controllers that can duplicate a lot of the functions of your hands. Most importantly, you can point them in different directions at the same time, so you can shoot at two different moving objects at the same time in games such as Space Pirates Trainer. This advantage is temporary, as the Oculus Touch hand controls will be arriving later this year.

While the Vive has advantages over the Oculus Rift, the content battle is pretty even. Oculus has the exclusive rights to its bundled game, Lucky’s Tale, which is a delightful experience for both kids and adults. It’s like Mario and Crash Bandicoot in VR. It has some other great experiences like Adr1ft, Henry, and Eve: Valkyrie. These experiences are fun even when played with the inferior Xbox One controller. The great thing about Lucky’s Tale is that I can see myself playing it for a long time. But most of the experiences are much shorter, like arcade games.

The Vive comes bundled with Fantastic Contraption, a $40 VR game on Steam. In this game, you have to move a ball forward by building a contraption that allows you get a purple ball from one place to another.  A full tutorial on how to play it is here. It’s surreal VR building and puzzle game, where you create life-sized machines as tall as you can reach. Once you complete them, you set them into motion to get the ball to your goal.

You can achieve this goal just about any way your can imagine. You can use a complicated Rube Goldberg solution or go with something minimalist. The full Fantastic Contraption game launches today with 50 levels, online solution sharing, and a lot of replayability.

Later this year, the game will come out on the Oculus Rift with the Oculus Touch. Version 1.0 focuses on room-scale with a minimum play area of 2 meters by 1.5 meters, but later modes will allow for standing or seated play. You have to love unstructured play if this is going to work for you. I found it difficult to get started. But the contraptions built by those who have played the demos look pretty cool.

I found it more fun to play Skeet: VR Target Shooting, a shooting game that runs at a frenetic pace. You pump your shotgun with the left control and fire with the right at skeet targets. This is one of those games that makes you sweaty, and I like those kinds of experiences. But I don’t think I would pay much for this. Audioshield is also a lot of fun, except you’re blocking little colored balls that come at you. You block the blue balls with a blue shield, and red balls with a red shield. When they come at you fast, you have to block with the left and right shields really fast. And that also makes you sweat. It’s fun, and it’s particularly entertaining to play in a group setting. But like I said. You aren’t likely to pay much for party experiences.

I’m still waiting for something really compelling to show up on the Vive.

I’ve noticed a few pain points of VR as it exists today. It’s going to be decades before we get perfect VR, which resembles a Star Trek Holodeck experience. But it’s already easy to see what we’ll need in the next generation of VR.

I’d love to see a version of the Vive without a big triple-wire coming out of it. Wireless technology would make the base stations much less painful to set up. The touch controls are awesome, but you can only really pretend to use one or two fingers. What if, as with Leap Motion’s technology, you could use all 10 fingers?

Eye-tracking technology would also be a natural fit for VR. And the VR headsets should be able to convert to augmented reality, where you layer animations on top of the real world. But we’re not there yet, and the HTC Vive is a very good step into the era of virtual reality. It needs more content, particularly from Valve. Hopefully, it will materialize and give us all something to do in this brave new world.

The HTC Vive virtual reality headset is now available. HTC provided GamesBeat with a headset and equipment for the purposes of this review.