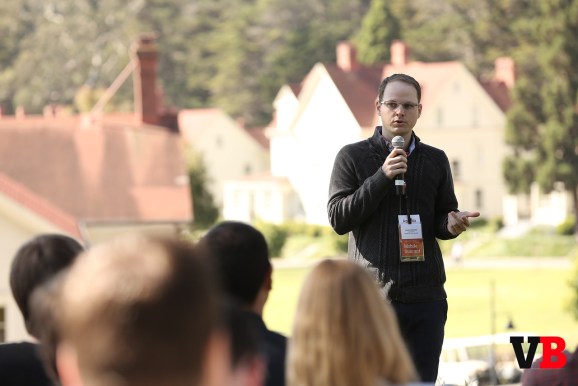 Update April 8, 7:25 a.m. PT — Williams says Pinterest “didn’t make the change for a revenue decision. We did it because people activated better and got more value from Pinterest.”

Ever had services like Yelp and Pinterest mercilessly boot you off their mobile site and force you to download a native app whether you want it or not?

Pinterest’s product lead for growth, Casey Winters, can tell you why that happens because he’s “the asshole that makes Pinterest do that,” as Winters himself put it at VentureBeat’s Mobile Summit conference.

Winters’ argument is pretty simple: After an A-B test, “you can basically see where you get more engaged users and more revenue over time.” Defying the logic of some incredibly frustrated users, Winters found that aggressively promoting Pinterest’s native app and limiting the mobile site’s functionality for some users ultimately left the social network with more loyal users and thus, more money.

Here’s the explanation Winters shared at the event, trimmed just a bit for clarity:

So, I want to talk to you guys about the mobile equation — or, the mobile Web to app handoff and tradeoff. So, Mike [Ghaffary, Eat24’s CEO] talked about knowing that customers of his company are 10x more valuable than they are on the Web. How do they know that? They know that because of their mobile equation.

But before I get into that, I want to ask a question: How many of you have gone to a mobile website only to get a full-page ad that says to download an app instead? [hands raise] How many times did that piss you off? Okay, well I’m the asshole that makes Pinterest do that. The reason I can do that is because I know the answer to our mobile equation.

What the mobile equation asks is simply: What’s going to make me more money, or make my company have more engaged users? Pushing someone to use the mobile Web experience I created, or to go further and try to get them to download that app?

And, there’s a really easy way to do that: You just do an A-B test. Some people come to your mobile website, you tell them to download the mobile app, and you don’t allow the mobile Web. And for some people, you just go through the mobile Web experience. And you cohort those users, you can basically see where you get more engaged users and more revenue over time. So we did that experiment at Pinterest. And what we found is similar to Yelp, that, even though we had way less users download the app than go through the mobile Web experience, they had activated at a 3x higher rate.

So we took every step of that funnel and we just tried to improve it. So we did probably 15 iterations on a mobile app interstitial, increasing the conversion rate to the mobile app every time, almost. We also took a look at how could we optimize our mobile sign up flow. If people are landing from something specific on mobile Web — like they’re coming from SEO — can we show them that level of specificity as soon as we show them the app instead of going through a generic sign up form? All of these things increased mobile app conversion, which increased our mobile equation, tilting toward the mobile app.

If some of you are dependent on Google as a source of traffic, you’ll probably be aware that they’ve announced that if you have a mobile app interstitial, you’ll no longer be considered “mobile-friendly.” And what that means is long-term they will probably rank you lower on mobile. So, what we were able to find is that we could just make our interstitial a header which you could scroll right past, and see the content, and that fits within Google’s guidelines. It’s maybe skirting around it, but it fits within their guidelines today… The next thing we did is maybe going a little bit further is, if you click on anything on the mobile website, we will actually take you to Google Play or the App Store to get that download. And, that also gives us more information about what you care about when you open that mobile app for the first time.

…When you look at the process of downloading an app, it takes time. People go and do other things. So what we did, once we took you to the App Store or Google Play, is we reloaded your browser with a reminder that you went to go download the app. So it says, “Thank you for checking out the Pinterest app, click here to sign in.” That also increased the benefits of the mobile app for us.

You can answer the question right now if it’s better to optimize for a mobile app experience or a mobile Web experience. You don’t have to take it as strategic — you don’t have to take it on faith that this is where the company is going. So, a couple of things to remind yourself … learn your mobile equation, do that experiment, figure out every step of that flow, and see if you can optimize it to improve it…