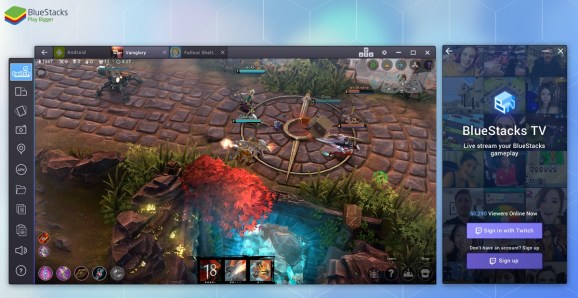 You can watch Vainglory matches on the TV with BlueStacks and Twitch.

Palo Alto, Calif.-based BlueStack said it has the ability to let people stream mobile games and watch mobile game streams inside its popular App Player, which has a virtualization platform that lets you play Android mobile apps on a PC. This means you are playing a PC version of a mobile game and streaming it to Twitch.

BlueStacks has 130 million downloads to date for its App Player while Twitch has more than 100 million monthly active users. BlueStacks has integrated Twitch’s recently introduced applications programming interfaces. As a result of that integration, BlueStacks users can watch Twitch streams via the App Player, and they can also stream their mobile games to Twitch with a single click.

“This was a natural combination,” said BlueStacks CEO Rosen Sharma in a statement. “BlueStacks has mobile equivalents of the most popular games on the Twitch platform — midcore [role-playing] titles especially. It used to be hard to stream a mobile game. It involved multiple devices: a tablet, a webcam, and wires. We’ve cut all of that out. From a PC, it’s easy to stream. It’s why Twitch has become so popular so fast.”

Sharma added, “BlueStacks users are already playing mobile games like Hearthstone, Castle Clash, Vainglory, and others [and] ­we just built a bridge between our platforms. This combines the power of two huge user bases.”

Mobile developers and publishers can gain a large new distribution channel, he said.

“We’ve always known our mobile games look and sound awesome on PC, but streaming them from a phone is complicated,” said Mark Zhang, the senior vice president at IGG, the developer of the popular Castle Clash title, in a statement. “We’ve been approached to put an SDK in our games, but that’s bandwidth we don’t have. We’d rather focus on our games. The fact that millions of people can stream Castle Clash to Twitch without us doing anything is massive.”

BlueStacks says it focused on simplicity with its broadcasting solution.

“The simpler streaming becomes and the more games that are easy to stream, the better for the whole ecosystem,” said top Hearthstone streamer Aleksandr “Kolento” Malsh in a statement. “If I’m going to stream mobile games, I don’t want to change my PC setup. This lets people keep everything the same.”

To commemorate the launch of BlueStacks TV, the company and Paris’ Glory4Gamers are hosting a 16-­player tournament of top Hearthstone competitors using the mobile version of the game to stream live to Twitch. The tournament is single­ elimination, and the winner will receive $1,000. The tournament begins on Twitch at 6 a.m. Pacific time on April 7.

BlueStacks was founded in 2011, and it released its first version of the App Player in 2012. BlueStacks now has 100 employees and has raised $30 million in funding from investors including Andreessen Horowitz, Intel, Qualcomm, and Samsung. Rivals include Kamcord and Mobcrush.