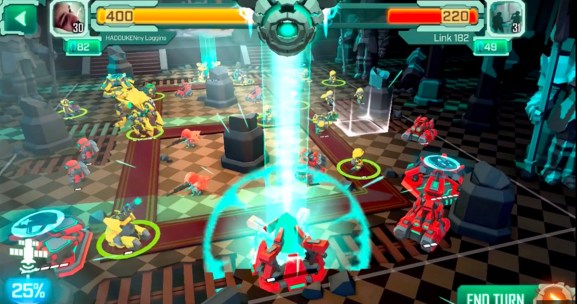 The game is a turn-based, free-to-play, mech player-versus-player strategy game that will be available later this year on iOS and Android devices. Turbo has a well-heeled investor in SoftBank Korea, and it is using some famous Final Fantasy developers: designer Yoshitaka Amano and composer Nobuo Uematsu.

The deal shows that GungHo is still gunning to be a global game publisher with a presence in the West in addition to Japan, where it has been reaping revenues for years with its Puzzle & Dragons game. GungHo has a full lineup of mobile, console, and PC titles coming later this year.

“Turbo’s fresh, stylistic take on the classic turn-based strategy genre is the perfect complement to our expanding portfolio of premier mobile titles,” said Jun Iwasaki, the CEO of GungHo Online Entertainment America, in a statement. “We have high expectations for Super Senso’s unique brand of PvP warfare and look forward to leveraging our expertise to further enhance the game.”

“Our ambition at Turbo has always been to create amazing games that will engage players for years to come, not just days or months,” said Yohei Ishii, the CEO of Turbo, in a statement. “This new partnership with GungHo Online Entertainment America will provide us with the unparalleled scale and strategic resources to ensure we can deliver our own brand of triple-A competitive mobile gaming to a global audience.”