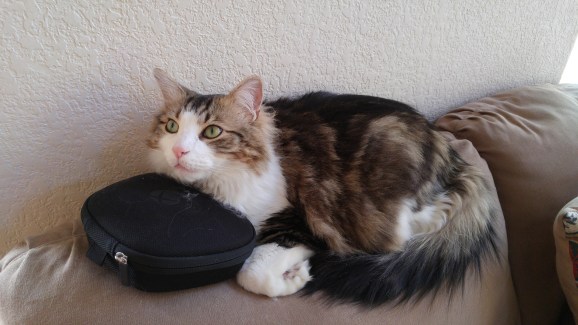 He was not happy with me.

I sat on my cat because I was trying to sit down in virtual reality. While wearing my HTC Vive headset, I noticed that a simulated recliner lined up pretty well with the real-world recliner in my room. It seemed like a great idea to try to sit down in the chair, because how often do you get the chance to sit in a virtual seat?

Well, it was actually a terrible idea because my pet cat Neeko had curled up for a nap, and I wasn’t even looking for him when I brought up the Vive camera. As I sat down, I realized my mistake when something fluffy and furry started wriggling underneath me … and I’ve felt terrible ever since.

Go ahead and watch the entire tragedy unfold in the video below:

Again, this isn’t really the Vive’s fault. I should’ve been looking, and — really — I shouldn’t try interacting with real-world objects at all while inside of VR. That’s always a bad idea. Stick to the play area that the SteamVR software warns you about, and you’ll avoid things like sitting on helpless animals.