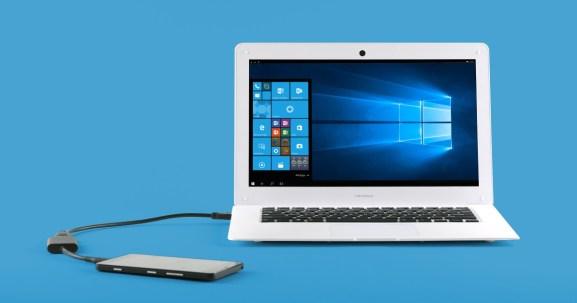 NexDock, the hardware concept that your laptop should be powered by the mobile device of your choice, just got one step closer to reality. The $149 laptop shell that extends your smartphone, tablet, or PC stick has passed its $300,000 funding goal on Indiegogo. Indeed, NexDock cofounder Emre Kosmaz tells me that he and cofounder Yeliz Kayacan have booked their tickets to Shenzhen, China to finalize the details and kick off production.

NexDock is completely useless until you plug in another device to power it. Think of it like a portable 14-inch monitor, with a keyboard, trackpad, and 10,000 mAh battery attached. The ports and speakers are there, but no processor or RAM.

This is not a custom-built shell. Kosmaz and Kayacan wanted to start with something as cheap as possible, and any customizations (such as adding a USB Type-C port so you don’t have to use a converter) were out of the question for the initial product. The reason this laptop shell might seem familiar is that it’s used in a popular (“hundreds of thousands”) MacBook knock-off sold for $250 in China.

I had the opportunity to try the NexDock hooked up to various devices in a quick hands-on with Kosmaz and Kayacan in San Francisco. Not every mobile device is compatible, naturally, but there are many to choose from that are: Windows 10 Mobile devices with Continuum will work (the Lumia 950 and Lumia 950 XL), as will a handful of Windows tablets, the Raspberry Pi 3, Kangaroo PC, and many PC stick computers.

The best experience was arguably with Microsoft’s Continuum, but given how sales are going there, not many will be using a Windows phone with NexDock. That said, Kayacan said Microsoft engineers showed interest in the device.

The Raspberry Pi 3 was next in line — Kayacan told me this is the device the majority of NexDock’s backers are interested in hooking up. There is a bug right now where the trackpad has to be connected manually by means of a Bluetooth mouse first, but Raspberry Pi plans to address that with an update so users will able to use the NexDock trackpad from the get-go.

Devices that require power because they don’t have their own battery can be plugged into one of the USB ports (2 amps of power). Alternatively, you can also use either of the USB ports to charge your mobile device.

The NexDock’s real strength becomes clear when you realize you can swap mobile devices as you see fit. And of course, everything is saved on whatever you’re plugging in, so if just your NexDock is lost or stolen, you have nothing to worry about. It’s a great idea for PC enthusiasts, but also casual developers and gamers who like swapping and using a variety of devices.

So what’s next? Kosmaz’s vision is a revolution in mobile computing where the screen and keyboard are rarely replaced. Instead, you just upgrade your mobile device (many already get a new smartphone every year) and you get a more powerful computer at the same time.

In his mind, the idea has now been validated. The next step is to build a new laptop shell from the ground up with USB Type-C, a fully wireless option, and other customizations. But for now, his focus is getting the hundreds of NexDocks to backers.

The NexDock is expected to start shipping worldwide in June 2016. At the time of publishing, here are the crowdfunding options:

Keep in mind that the only cable you get with the NexDock is the power adapter — everything else you have to buy yourself. There are eight days left in the campaign, so you still have some time to decide whether you want to own the first NexDock.