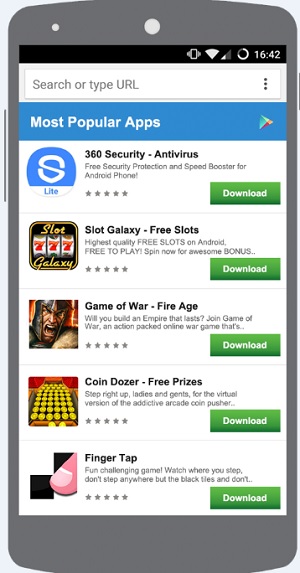 Above: Appnext drives hundreds of thousands of app installs per day.

The app stores are big jungles, making it hard for someone to find the app that is just right. By attacking that discovery problem, app monetization and distribution platform Appnext grew its revenues by 345 percent in 2015. The London-based company now drives hundreds of thousands of app installs per day by making recommendations of apps that people can install. The recommendations reach hundreds of millions of unique users in hundreds of countries. In a month, Appnext serves billions of recommendations.

Appnext released its self-serve ad platform in November 2014. It makes it easier for mobile app and game developers to reach the right customers at the lowest costs. Appnext is one of many companies trying to help developers with a huge problem in the $30 billion mobile gaming industry: getting games and apps noticed without overpaying for advertisements.

The platform offers cost-per-install (CPI) bidding, allowing app advertisers to place direct bids on specific publisher sources. That means that you can target an individual with an ad in an automated fashion and do it with both low costs and transparency in mind.

Natanson believes that app developers should be able to cost-effectively acquire high-quality users without spending a ton of money on user acquisition. Appnext, he says, puts the power back in the hands of developers.

“Our job is to make sure the user sees the options for apps that he or she is most likely to use,” Natanson said. “In that way, we don’t see ourselves as an ad network. Right now, it’s new apps that you don’t have. Later on, we’ll show you recommendations on apps you already have. We maximize it, so the publisher generates the most revenues and so the advertiser gets the most engaged users.”

Appnext said it has integrated more than 40,000 top app developers and Web publishers. Thousands of concurrent live campaigns for apps exist on iOS and Android. Those developers operate their ad campaigns on Appnext on a self-serve basis. The advertisers range from top app brands to indie developers, and they use Appnext as an alternative to Facebook or Google when they want to reach people on a large scale.

According to a recent report from eMarketer, more marketers than ever before are investing in app install ads. Last year, eMarketer predicted U.S. mobile app install ad spending would rise by 80 percent from the previous year, reaching $3 billion.

The business of recommendations is a little tricky.

“We don’t always know if a user wants to get a taxi now or wants to play a game,” he said. “Networks like Facebook and Google are smart. They’re committed to showing one ad. We look at it from the point of view of the user, based on the data we have. We get smarter over time, and we are making a move toward knowing what the user needs. The advantage is in the options.”

In this sense, Appnext shows users many impressions of different apps, but these individuals often take a very small number of actions in terms of installing apps.

Gaming is about 40 percent of revenues at Appnext.

“The advertiser using the platform runs a user-acquisition campaign,” Natanson said. “If they get a user through us, we get paid. The advertiser sets a bid to buy ads from different integrated partners. Most of the revenue goes to the publisher, and we get a portion.”

If developers want to change the recommendations, they can do so. They can view the system transparently, and they can choose if they want to show a specific category of apps or blacklist certain apps.

“We let them choose, as it’s their business,” Natanson said. “That differentiates us from Facebook and Google.”

Rivals in video ads include Unity, Chartboost, and AdColony. Twitter’s MoPub, Facebook, Yahoo, and IronSource are rivals in native ads. Natanson sees consolidation coming in the mobile monetization business, but he believes the company will continue to focus on the app discovery channel where there aren’t as many players.

Appnext recently opened a new U.S. headquarters in San Francisco, led by general manager Jason Akel. The engineering team is in Tel Aviv, and the company also has an office in Beijing. It has more than 70 employees, and it is completely self-funded to date.

“We’ve been growing fast, with 2015 at three times bigger than 2014, and the run rate is six times bigger,” Natanson said. “We want to make sure the growth continues and that we develop a product that changes the way users choose when it comes to app usage.”