No surprise here: The PC market started 2016 off poorly. Both Gartner and IDC have noted PC shipments were down globally, again.

Gartner estimates worldwide PC shipments fell 9.6 percent to 64.8 million units in Q1 2016. In fact, the firm notes that this is the first quarter to see fewer than 65 million units since 2007. In other words, Q1 2016 PC shipments were almost at a decade-low.

The top five vendors were Lenovo, HP, Dell, Asus, and Apple. As you can see in the chart below, Gartner found that Apple and Asus were the only companies among the top vendors that experienced an increase in PC shipments. Leaders Lenovo and HP saw particularly poor results, though the declines weren’t quite in the double digits.

IDC agrees with Gartner that Lenovo, HP, and Dell were down, but it also found that Apple and Asus declined as well. The whole board is in the red: 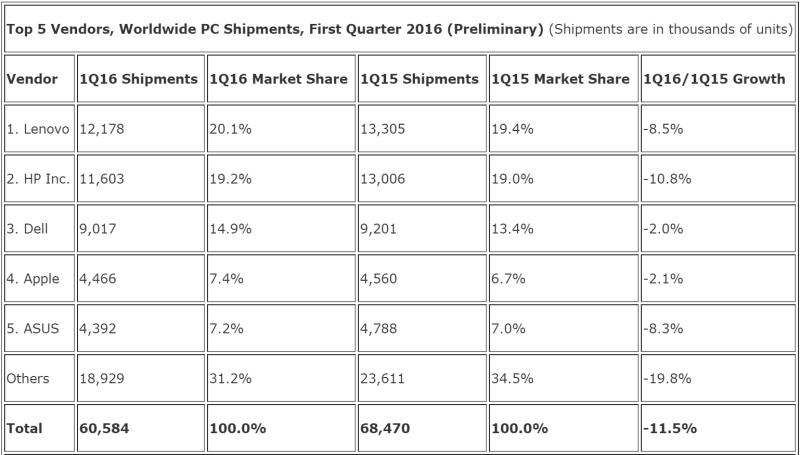 Gartner pointed to the strength of the U.S. dollar as one of the reasons for the continuing decline. IDC added that the volatility of stocks and commodities helped depress shipments.

“The deterioration of local currencies against the U.S. dollar continued to play a major role in PC shipment declines,” Mikako Kitagawa, principal analyst at Gartner, said in a statement. “Our early results also show there was an inventory buildup from holiday sales in the fourth quarter of 2015.”

And as always, the same trends were brought up: PCs are not being adopted in new households like they used to, especially in emerging markets where smartphones rule. Enterprises are still simply piloting Windows 10.

“In the short term, the PC market must still grapple with limited consumer interest and competition from other infrastructure upgrades in the commercial market,” IDC research manager Jay Chou said in a statement. “Nevertheless, IDC still projects total business IT spending to grow compared to 2015, and as we head toward the end of 2016 things should start picking up in terms of Windows 10 pilots turning into actual PC purchases.”

2016 will be the first full year that we’ll see whether Windows 10 can help reverse the PC market’s decline. So far, it doesn’t look good.

Gartner expects that businesses will start to adopt Windows 10 toward the end of the year. IDC is also hopeful that this year, Windows 10 will somehow help reverse nosediving PC sales.