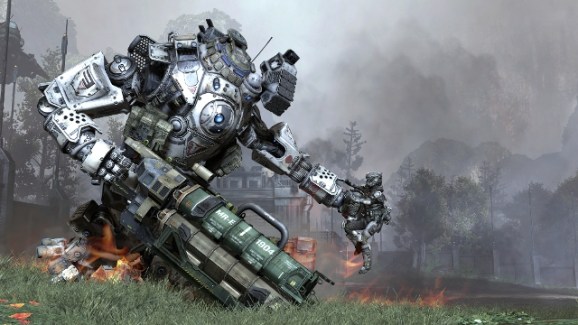 It’s time to start gassing up your giant war mech because one of the best shooters of this generation is getting a sequel.

Titanfall 2 is coming soon, and publisher Electronic Arts is promising to show off more about the futuristic mech shooter as part of its presence at the Electronic Entertainment Expo trade show in June. This is developer Respawn’s followup to the original Titanfall, which Microsoft paid EA to keep off of Sony systems as a way of setting the Xbox One apart from the PlayStation 4 early in this console generation. This time around, it’s already confirmed for PS4 in addition to Xbox One and PC, which should give the franchise its best chance yet to find a major audience in the $99.3 billion global gaming industry.

Titanfall debuted with some serious expectations due in large part to the people who made it. Many of the key creators responsible for the futuristic mech shooter were also responsible for making the Call of Duty franchise one of the biggest properties in the $99.3 billion gaming industry. And while many people enjoyed Titanfall (it was my game of the year for 2014), others lamented that it was missing a good single-player campaign and didn’t live up to the high hopes. With a strong core from the first release and several more years to build content for the sequel, Titanfall 2 could finally deliver on the original promise in a big way.

EA is now shifting into a promotional mode, and that includes releasing the following teaser trailer:

Titanfall is a series that EA obviously still wants to see do well. Call of Duty is regularly the best-selling game released every year, and it is one of the reasons publisher Activision is so successful. EA has tried to step into that space with a variety of releases that include Medal of Honor, Battlefield, and Star Wars: Battlefront. Both Battlefield and Battlefront have had some success, but they also come from the same studio, DICE in Sweden. If Titanfall 2 delivers, the company could begin rotating between Battlefield, Battlefront, and Titanfall to ensure it always has a fresh marquee shooter on the market.