For Norris, it was a recent Call of Duty match. “The guy who won … his emblem was all White Supremacist stuff,” Norris told GamesBeat in a recent interview. “And so it was a horrible experience at the end of the game.”

The desire to avoid those kinds of situations led Busby to create a community site for Bungie’s popular online shooter Destiny called DestinyLFG.com. “LFG” is an acronym often used in MMORPGs that stands for “looking for group.” If the game lacks matchmaking tools, typing “LFG” into chat is often the only way to connect with players looking to do the same activity, but the resulting group’s quality is often sketchy at best.

Busby recalled an incident from his days playing Blizzard Entertainment’s massively multiplayer online role-playing game (MMORPG) World of Warcraft. “Basically, this is when there were still 15-man Upper Blackrock Spire runs,” he told GamesBeat. After a few hours of attempting to take down the raid’s bosses and failing, he said frustration took over. “You know, you don’t want to give up,” he said. “You don’t want to just bail on this group, but then there’s that one player who decides to run into the room with all the whelps and the eggs and they all break apart, basically wipes the entire group and then they leave.”

In other words, the player pulled a “Leeroy Jenkins.”

“All you want to do is slam your fist down on your desktop,” Busby said.

After Bungie said it wasn’t going to add matchmaking tools in-game for its toughest Destiny content, Busby saw an opportunity to connect like-minded people. His web site allows people to quickly post what content they want to tackle, what platform they’re playing on, and whether or not they want teammates to use microphones. DestinyLFG quickly took off, gaining over 6 million unique users. It wasn’t long afterward that Busby and Norris thought about branching out.

“We actually went out and surveyed our audience to see what they want from the DestinyLFG.com experience and we actually had to turn our survey off after about three days because it was so popular,” Norris said. “And resoundingly, what everybody was excited about was the ability to experience the same kind of tools and features that we’re offering on Destiny for other games.”

With that in mind, Beerock Studios headed to Kickstarter with the idea for a new mobile app called For the Win (FTW). Unlike popular Destiny matchmaking services like DestinyLFG and The100.io, FTW is cross-platform and cross-game. It will give users instant access to a large community that’s looking for teammates. It’s an idea that should appeal to anyone who’s ever had a gaming night ruined by random players.

“Mark and I both believe that random matchmaking is flawed,” Busby said. “That people have a desire to connect with people through communities, and meet other people easily. And they have specific requirements for their gaming, because in the end they don’t want to waste time and they want to have a great experience.” 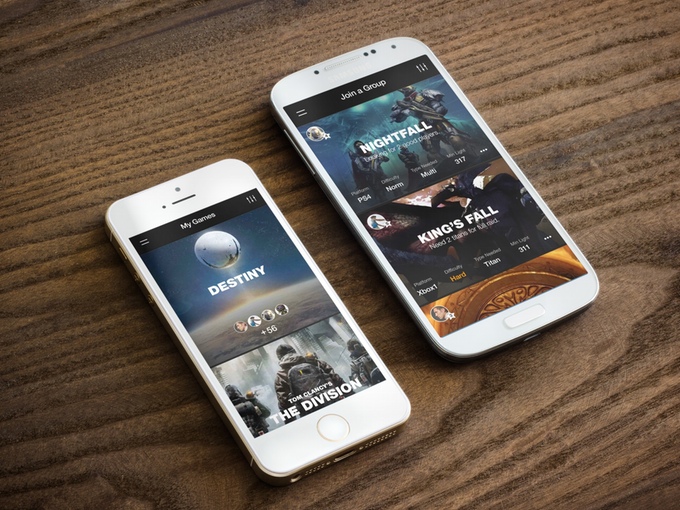 Above: FTW will support games like Destiny and The Division at launch.

Beerock is asking for $75,000 to build the FTW app. It’ll support at least seven online games at launch: Destiny, The Division, Call of Duty, Borderlands, DayZ, Minecraft, and Ark: Survival Evolved. Users will be able to create profiles, send messages, schedule events, and receive push notifications on their mobile devices. And, perhaps most important, it’ll have a reputation system, a way for gamers to avoid the Leeroys of the online world.

“We hear a lot of complaints from people who, even using other LFG systems or random matchmaking, they’ll be at the [final boss] or they’ll get to the treasure chest in Destiny, for example, and players will kick them out so their friend can join,” said Busby. “And that’s a very bad, negative experience. So, creating a system like this will basically weed out those negative experiences.”

Beerock plans to launch FTW before Destiny 2 arrives and support it through free memberships with “nondisruptive ads” and paid memberships. The premium tier will remove the ads and include features like bigger friends lists, adding Twitch stream to listings and events, and scheduling more events per week. Membership pricing is still being determined.