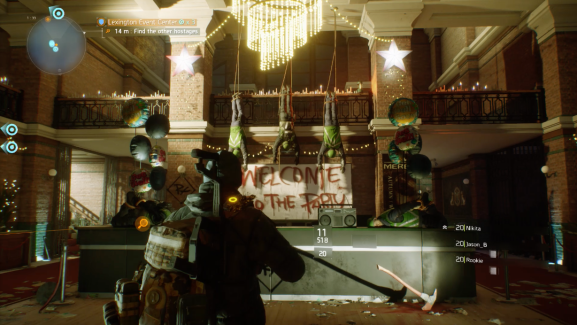 Game brands continued ramping down in March, with the industry spending an estimated $35.7 million on 20,541 airings of 92 commercial spots. It’s down nearly $2 million from their total spend in February. Thirty brands stuck mostly with their tried-and-true creative, with less than one-third of the aired ads debuting for the first time in March.

GamesBeat has partnered with iSpot.tv, which measures TV advertising in real-time, to bring you a monthly report on how gaming brands are spending and which are generating the most digital response. The results below are for the five top-spending gaming industry brands during March.

Ubisoft moves into first place, overtaking massive spenders Machine Zone. With six different spots and an estimated spend of nearly $9.1 million, Ubisoft ran ads 1,956 times throughout March. Still pushing The Division and Far Cry: Primal, the game publisher spent heavily on spots during airings of The Walking Dead, NBA basketball, and SportsCenter. The ad with the biggest push, “Tom Clancy’s The Division: When Society Falls,” accounted for nearly half of the brand’s budget in March alone, with The Division promotions accounting for over 90 percent of the brand’s efforts on TV last month.

A surprising addition to our ranking, Sony dramatically ramped up its spending, increasing from just under $200,000 in February to over $4.3 million in March. Promoting primarily MLB: The Show and Uncharted, Sony ran four spots nearly 1,000 times over the past month. Its most aired ad, “MLB: The Show 16- – Focus,” debuted on March 14 and ran over 900 times in support of its March 29 release.

Nintendo ran 10 spots 2,029 times in March. With an estimated spend of just over $4.2 million, the Japanese publisher generated 355.3 million ad impressions through airings during Nickelodeon’s 2016 Kids’ Choice Awards, South Park, and Family Guy. The game publisher spent most heavily on a Pokken Tournament spot “Pokémon are Ready for Battle.”