You may have trouble getting your Hearthstone on.

Blizzard acknowledges it is dealing with a distributed denial-of-service (DDoS) attack that is preventing some people from getting online with the publisher’s Battle.net services. The company took to social media to confirm the issues, and it says it is monitoring the assault. Earlier today, the notorious cyberattack group Lizard Squad began spreading alleged personal information for key Blizzard personnel including chief executive officer Mike Morhaime.

We’ve reached out to Blizzard and Lizard Squad for comment.

We are currently monitoring a DDOS attack against network providers which is affecting connections to our games. https://t.co/YsDZ0CYdFX

Lizard Squad posted the message “Get ready” before any Battle.net issues started, and then it began tweeting messages like the following.

This comes after the Lizard Squad account retweeted a post that includes images showing a person breaking into the personal email of select Blizzard employees. You can see one of those images below — although others are still online and feature what looks like phone numbers and other sensitive information. 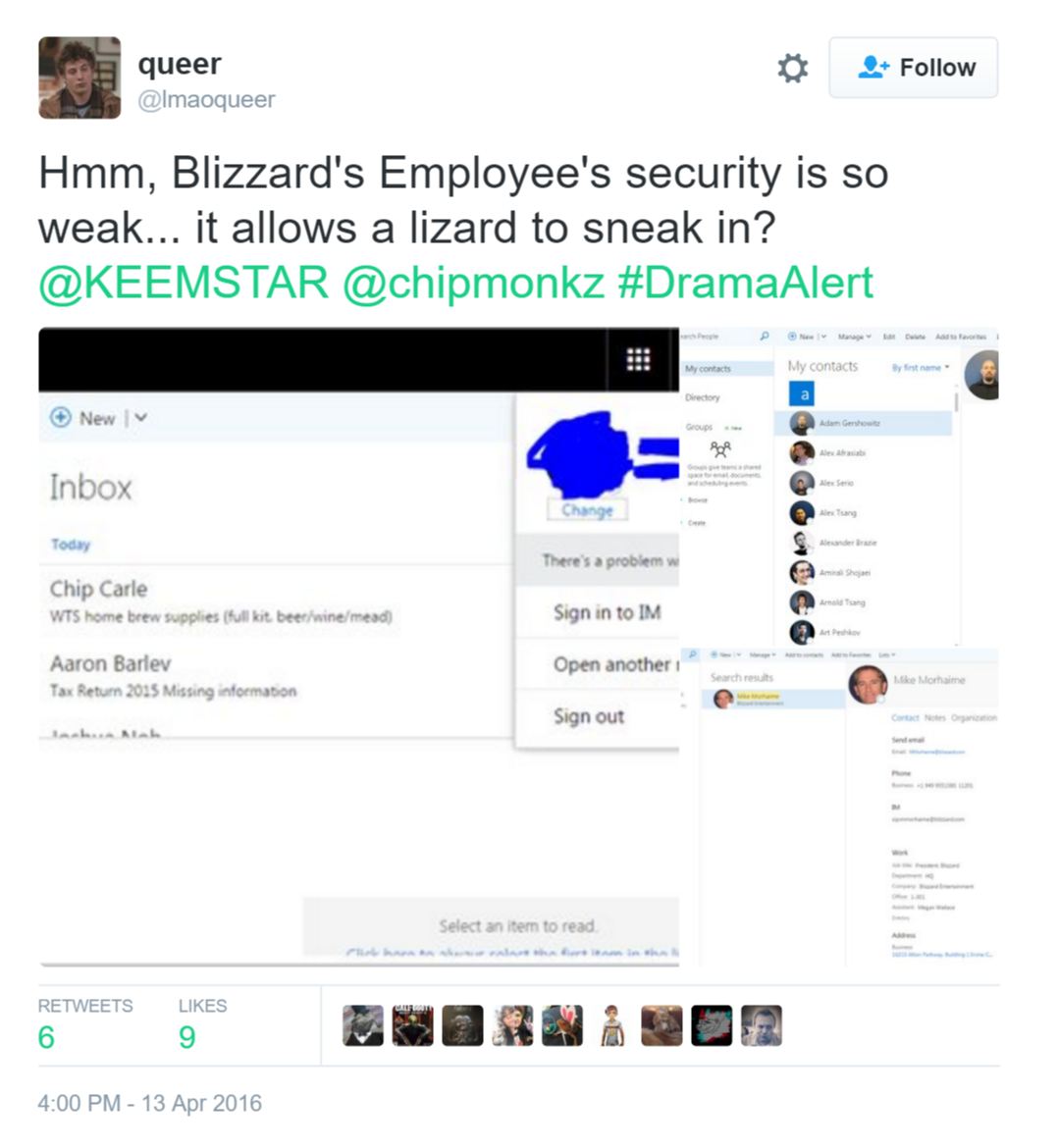 Above: This is one of three screen grabs showing alleged information of a Blizzard employee’s email.

Lizard Squad has attacked Blizzard in the past. In 2014, the company slammed both the World of Warcraft company and Sony Online Entertainment, publisher of Everquest, with a DDoS. The group then went on to attack both Microsoft’s and Sony’s online gaming networks during the 2014 Christmas holidays. That barrage took Xbox Live offline for 24 hours, and it knocked PlayStation Network off the Internet for five days.

These attacks eventually forced law enforcement to take notice. Cyberattacks turn into felonies if they cause more than $5,000 in damages. Considering that Xbox Live, PSN, and Battle.net likely make at least that much every hour from digital sales, Lizard Squad could face serious charges.

“The FBI is investigating the matter” a spokesperson for the Federal Bureau of Investigation told GamesBeat in December 2014. “Given the pending nature of the case, we cannot comment further.”

It seems like that case might’ve resulted in some arrests recently.

We’ve reached out to the FBI to ask whether it has made any arrests recently. We’ll update this story with any new information.

As for Blizzard and Battle.net, the attack is primarily causing connection troubles and a serious amount of lag. The publisher is warning players about it in its game launcher, on Twitter, and in its forums.

Past attacks from Lizard Squad, which uses a sophisticated set of tools, have lasted for days.