Following the universal acclaim of From Software’s Bloodborne, lead designer Hidetaka Miyazaki returns to a more defensive, tactical action role-playing game. Dark Souls 3 (out now for PlayStation 4, Xbox One, and PC) seeks to rekindle the ruthless cycle of death and discovery that grew the series a stalwart fanbase. Your character must bring back the Lords of Cinder to their thrones in order for them to kindle a flame integral to the dying world of Lothric. Between your character and the Lords is a decrepit land of towns teetering on cliff edges, musty catacombs, and a tale steeped in mystery.

I dove into the depths of the game’s PlayStation 4 version to face the latest horrors Lothric had to offer.

Death is inevitable, but is it still worthwhile? 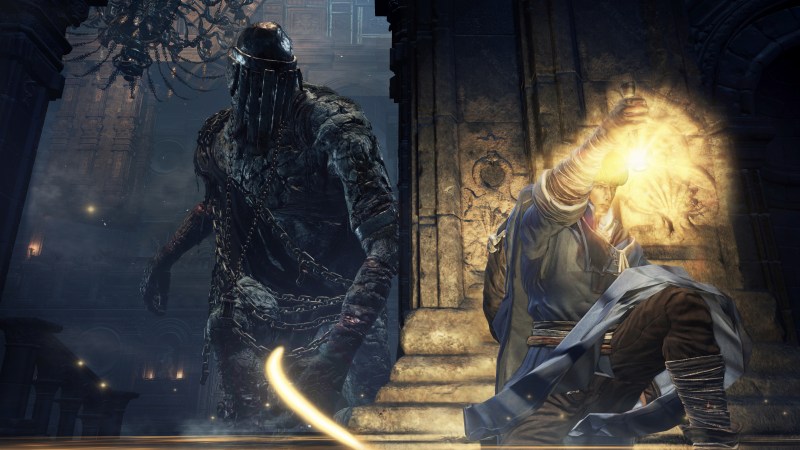 Above: Dark Souls 3 provides the most finessed gameplay experience of the series.

The most refined Souls experience yet

By this franchise’s standards, Dark Souls 3 is the most approachable game in the series so far. The particulars are still present: taking down dozens of cursed creatures in order to fell a monstrous boss and open the next leg of the journey, all while confronting traps in the environment and keeping a keen eye out for ambushes. Still the same tune, but From Software have polished this third installment to near perfection.

The improvements seen between Dark Souls 2 and Dark Souls 3 look simple on paper. Animation timing is sharper. Attack telegraphs are smoother. Parries and kicks (while a bit too difficult to pull off) feel like they have a stronger role in average encounters. But the team at From Software’s continued capability to finesse the already microscopically precise systems it’s previously put in place is endlessly impressive. Finding, isolating, and defeating each foe — even if it was our fifth time doing so in a specific arena — still delivered a tremendous rush of triumph.

The placement of secret pathways and items is more clever than in prior installments. Impacts on weapons and shields have more resonance, encouraging more shield bashing. Levels use vertical space more efficiently, with early parts of a stage often requiring steep descents down ladders or rooftops, giving both players and NPCs amble sneak-attack opportunities. All of these improvements, stacked on From’s deliberate design foundation of precise combat controls and evocative level design, makes for an enthralling adventure that invites gamers to be as exacting in playing the levels as the designers were when making them. 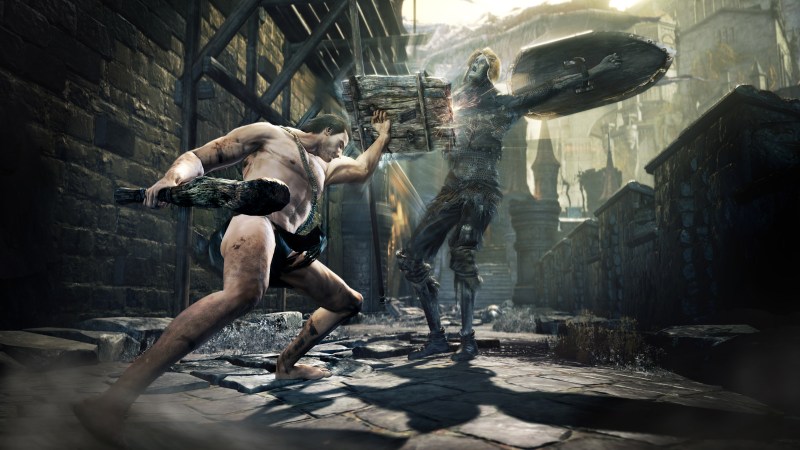 Above: All play styles can find new viability in Dark Souls 3.

The biggest change in Dark Souls 3 comes with the return of the third status gauge. This mana/weapon skills bar joins the standard health and stamina indicators and facilitates the amount of magic and special attacks that players can perform without refilling the gauge via potion or spell. In doing so, From Software has sewn up one of the major gaps in the franchise’s play-style flexibility. Magic use (often decried by series fans as “too easy” a choice) is more readily available across many of the character classes, giving a quicker and more potent range attack to those who wish to invest in spell work.

Those dead-set against the use of magic can use this blue status bar as an additional risk-reward dance with slow but powerful special-weapon attacks. Others can save a simple spell to a free weapon slot for an emergency escape. Your character can be hardcore and up close or magical from a distance. The Dark Souls 3 playground just has a more generous middle ground for experimentation. 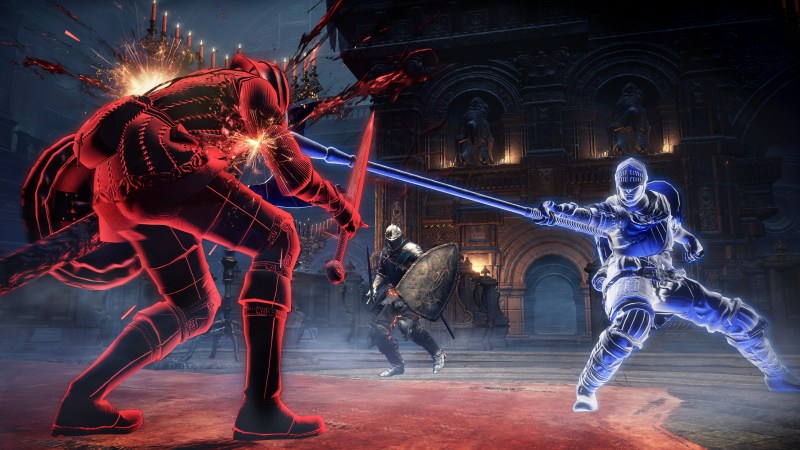 Above: Spawning in another Dark Souls 3 player’s world – to help or to invade – has never been smoother.

No matter how vicious an enemy is, nothing is more off-putting in the Souls games than seeing a notification of an invasion by another player. The human element transforms the dynamic of play, and in Dark Souls 3, the servers finally appear to be able to withstand the demand. Whether I invaded another random player to destroy them in 1-on-1 combat, were automatically called to the aid of someone, or left a summon sign for players to choose to call for our help, the connection held strong — it dropped only once in a few dozen attempts. Connecting with friends is trickier, but From’s modifications to password-protected multiplayer sessions makes finding your particular ally/opponent much simpler.

But all this newfound stability would mean nothing if playing Souls together wasn’t fun. Luckily, the hours melt away when you travel outside your own world. The difficulty scales fairly well, dropping or increasing your character’s strength and abilities based on how close you are to the host player’s level. And since you don’t lose any souls gained or items used outside your world, cautious players will feel emboldened to adopt a more direct strategy to support (or attack) their host. Multiplayer covenants — specific groups players can pledge themselves to in order to gain particular items when either defeating their host or slaying a level’s boss with them — are still more convoluted than they are worth, but the hardcore fans have likely already figured out everything and put the information online for anyone curious. 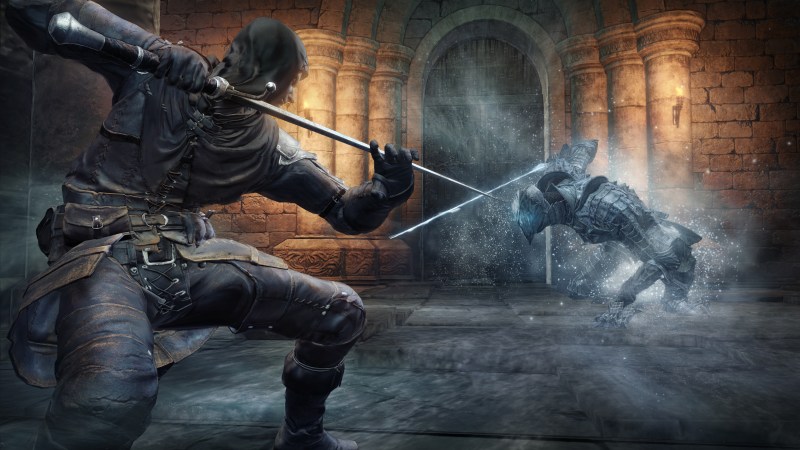 Above: Dark Souls 3 is an iterative, rather than innovative, experience

Dark Souls is a franchise that seems to save its most visually creative and challenging level architecture for its downloadable content. We’ve ran through these dilapidated stone courtyards before, as we have rushed between sunken ruins in a poisonous swamp before. The game gradually opens up to more distinctive environments but not before a creeping sense of familiarity takes root. We can roll away from a pitchfork wielding humanoid into a crumpling wooden house only so many times. Bosses often fare the worse, with attack patterns and move sets that, while mechanically distinct, feel all too similar to boss encounters elsewhere in the Souls saga. The persistence of the franchise’s carryover issues — a camera deathly afraid of corners, NPC and side quests that disappear or outright fail for obtuse reasons, a still finicky lock-on system, notifications that take up far too much screen real estate, and weapons piercing through solid walls — adds to this feeling of sameness.

As far as recursive loops go, Dark Souls has a wonderful one. The progression of exploring a level (scoping out the layout, dying, figuring out enemy attack patterns, dying, making it far enough to activate level shortcuts, dying) is still a thrill. Our brains refused us sleep until we parsed out our strategies for the next gameplay session, just as we have with every Souls-Borne title in the past. But the bullet-point activities of circle-strafing smaller enemies, aggravating single foes to isolate them from their group, and running away just beyond a pursuer’s ability to follow us are beginning to grow stale.

If the Souls series continues beyond this point, From Software will have to bring some major innovation to the table. 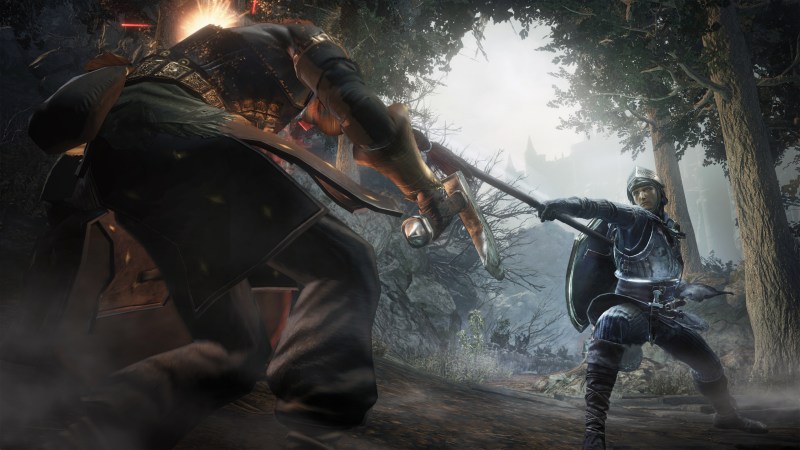 Above: The PlayStation 4 version of Dark Souls 3 suffers from consistent dips in performance.

Updated at 4:50 p.m. on April 10: A recent 1.03 patch — released on April 8 — has greatly improved performance on PS4. The comments below in reference to slowdowns and screen-tearing are no longer relevant to the retail version of the game. All other comments made in this section stand.

Half of our deaths in Dark Souls 3 (so far) were the fault of console performance. Playing Dark Souls 3 on PS4 feels like a meta version of one of the many hexes that could befall your character in game. Dips in frame rate, texture pop-in, and screen tearing are consistent and vicious, particularly in large areas or against widespread vistas. Given how spacious the boss-battle arenas are, this adds a significant handicap at the worst possible moments. Jarring slowdowns even hamper — sometimes outright ruin — more exploratory segments of the game, as the sudden motion of off-screen enemy ambushes also tended to send the experience into sputtering fits.

All of this occurred after we downloaded a large, mandatory “day-one” patch. But even robust stability support won’t stop this version of Dark Souls 3 from being a remarkably uglier one. Beyond the game’s 30 frames per second lock and the muddy textures, colors appear washed out, and the lighting is tepid. Part of that is due to the ashen-gray theme of the game’s art direction. But most of the issues, however, come from poor optimization.

We have the zenith of the Souls formula, and that is mostly a good thing. Dark Souls 3 is the most elegant distillation of the “demanding but not impossible” style first put forth in Demon’s Souls. And the return of the mana bar brings the greatest degree of play-style experimentation the series has had. Add to that From’s finally stable-at-launch multiplayer servers, and Dark Souls 3 is the most complete feeling Souls experience in the franchise.

The presence of “legacy” issues and reused design concepts don’t entirely denigrate the experience, particularly in the heat of any one intense solo or co-op fight, but it did leave us with more than a few instances of déjà vu. The success of the Souls series is largely tied to its capability to force players into a cautious, careful mindset. But in Souls 3, the developers appear to be playing things a bit too safe.

But even a safe Souls game is one of thrilling tension and discovery. We just hope From Software can take this opportunity to do what they so frequently demand of players starting to find themselves pinned down by their habits. Find a new path, and use it to devastate expectations.

Dark Souls 3 launches April 12 on PlayStation 4, PC, and Xbox One. The publisher provided GamesBeat with a PS4 copy for the purposes of this review.

Update at 4:50 p.m. Pacific on April 10: GamesBeat has updated the text of the review to reflect a recent patch release, in addition to some changes made throughout to elaborate further on our previous comments.