MathCrunch, the mobile-first education startup that helps students find personal tutors, has announced a pivot as it changes its name to Yup and expands beyond math into chemistry and physics.

Alongside today’s topic expansion and name change, the company has also revealed that it has added $4 million more to its coffers, taking its total seed funding to $7.5 million, in a round led by existing investors including Stanford’s StartX fund, which was established in 2013 to help support Stanford alumni.

Founded in 2014, MathCrunch (or Yup, as of today) is available for Android and iOS, and invites learners into a one‐on‐one live tutoring platform powered by an instant messaging service. Here, students can submit questions and connect with qualified tutors who have been vetted by the folks at Yup.

Users can also take a photo of a problem (e.g., a graph or an equation) to request help with, and ask impromptu questions about specific problems. It’s like a mobile messaging app specifically for education. 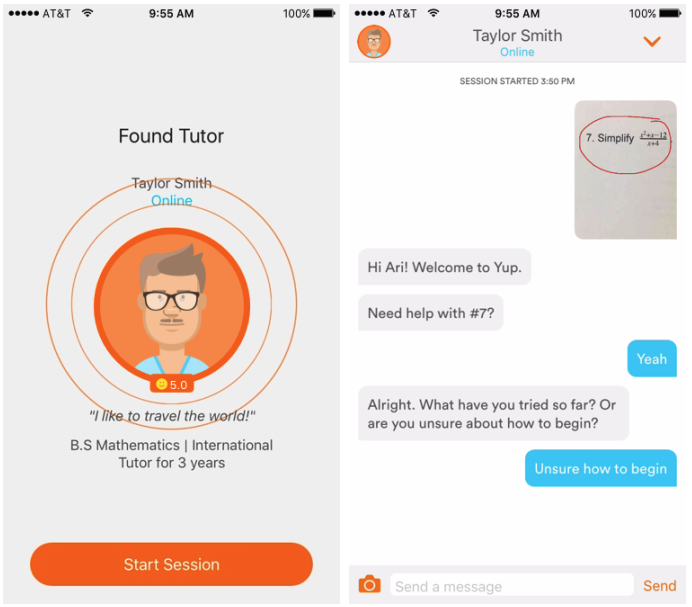 Above: Yup: the app formerly known as MathCrunch

Of course, Yup isn’t free to use. Back in September, the company introduced a monthly subscription that lets anyone sign up for a rolling monthly plan, with options of 60 minutes ($24), 120 minutes ($45), or 240 minutes ($80) over the month. The time is deducted from a student’s account on a minute-by-minute basis, meaning you can use the app for a quick question or a prolonged session.

Now, though, Yup is tweaking its payment plans to keep things simple. You can either pay $6.99 per month for 30 minutes, or go all-in for the unlimited plan, which will set you back $49.99. Alternatively, users can just pay on a minute-by-minute basis, which costs $0.24 per 60 seconds. But if history has taught us anything, when companies offer customers “unlimited” anything, they tend to “embrace” the offer. So doesn’t Yup’s unlimited plan open things to abuse?

Yup says that the average session length so far is around the 28-minute mark, and it has seen 300,000 signups from the 400,000 downloads it has garnered across iOS and Android. But dangle an “unlimited carrot” in front of users, and they may just keep on drinking coffee and asking questions. However, upon further probing, Yup confirmed that the unlimited plan in its current form is being offered for a “limited time to introduce people to the Yup platform,” and it “may need to increase costs come September.”

So it seems that Yup already knows that the unlimited plan is likely unsustainable, meaning this is little more than an introductory offer to entice people in. But in the pricing / sign-up section there is zero indication of this. 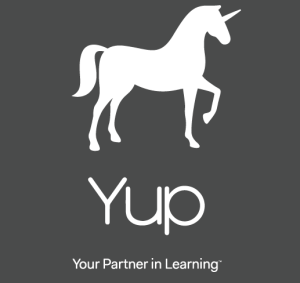 Another piece of today’s news left me scratching my head: Why change its name to Yup? Sure, it’s no longer restricted to math, meaning its existing name no longer fits, but “Yup” just feels a little too vague and generic to serve as a company name and brand. For me, it doesn’t really capture what the company is all about, and it will surely make searching for the company online a tough task.

“We expanded our services beyond math, so we needed a broader, yet relatable name,” Naguib Sawiris, CEO of Yup, told VentureBeat. “Yup is simple, distinctive, and positive. We want our students to understand how rewarding it is to learn, and tell them: ‘Yup, you’re on it.'”

Sawiris added that they wanted to build Yup as a “counterculture jab at the Silicon Valley zaniness,” which may partly explain why its new logo has a unicorn in it.

Yup is one of many “ed-tech” startups to emerge in what is proving to be a lucrative and disruptable space, with the likes of General Assembly, Udacity, Udemy, and Coursera all gaining mindshare. Yup is different, though: It’s not offering courses as such — it’s aimed squarely at those seeking help with very specific problems.

But more than that, the fact that it has adopted a mobile-first approach that mirrors many of the popular messaging apps out there is a clear sign of the demographic it’s targeting. Other startups from other industries are taking note too, with mobile-first and “messaging” increasingly prevalent.