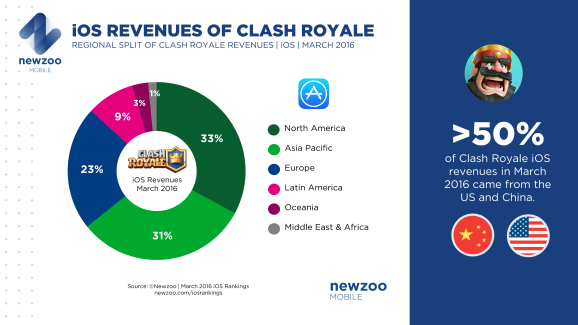 Supercell knows how to make money.

The mobile publisher earned $80 million from it’s newly released head-to-head strategy battler Clash Royale last month, according to industry-tracking firm NewZoo. That figure does not include the 30 percent that Supercell gave to Apple and Google, which would put the game’s total monthly revenues closer to $110 million. Clash Royale is an online multiplayer game where two people send out units from their deck to attack each other’s defensive towers. It is fast-paced with a strong layer of tactics, and it is already on pace to bring in more than $1 billion annually — although that isn’t guaranteed. That’s something that only a handful of mobile apps have ever done. Gaming on smartphones and tablets already generates $34.8 billion in spending every year, but Clash Royale could bump that number up a few notches.

Supercell isn’t new to this level of success. The company has previously made more than $1 billion annually from its Clash of Clans, which has finished beyond or near that mark since 2013. What’s extra impressive in this case, however, is that Clash Royale’s revenues are not coming at a significant detriment to Clash of Clans.

The better news for Supercell is that the $110 million doesn’t include Android revenues from China. Clash Royale only just made its debut in that key market this month after Kunlun, Supercell’s Chinese publishing partner, released it on a variety of mobile stores in that country (Google Play does not work in China).

At this point, more than half of the game’s iOS revenue is coming from just the U.S. and China. When you look at the spending by major territory, North America and Asia Pacific represent 64 percent of all iOS Clash Royale spending, so you can see the importance of getting the game out on Android in a country where Google’s operating system has a much larger install base.

Newzoo points out that Clash Royale has rocketed to such quick success because of its strong core gameplay elements combined with some serious pressure to spend real money to keep up with your friends. The game is arguably one of the best games to ever top the grossing chart on iOS or Android, and it stinks to lose a match because your opponent has a card you do not or has upgraded a character to a higher level. I know that convinced me to fork over $10.

But Clash Royale is also a treadmill. I didn’t feel any different about the game after spending that money. I immediately thought that I needed to spend more money to keep moving forward, and some people obviously end up doing that over and over.

These money-making techniques have pushed Clash Royale to the top of the grossing charts in the most important mobile markets including the United States, Canada, Germany, and Brazil.