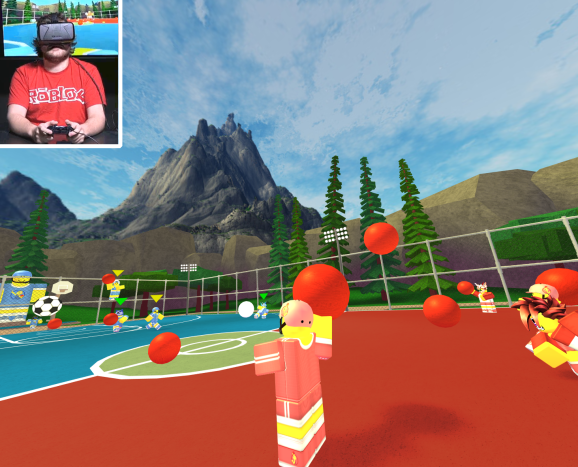 Roblox wants to reach players on every platform, and VR is no different.

Virtual reality is getting a theoretically limitless number of new games thanks to one of internet’s largest creative communities.

Roblox debuts on Oculus Rift today, and it is bringing its massive library of player-created content with it. Roblox is a free-to-play game that started out on browsers in 2005 that quickly added tools that empowered its community to create their own games and experiences. Those players have since built more than 15 million games for Roblox — some of which even earn a significant chunk of cash thanks to the game’s revenue-sharing features. Over the last several years, Roblox Corporation — the developer responsible for the creative tool — has brought it to mobile and Xbox One. Now, less than a month after Oculus VR released the Rift, you can play Roblox on one of the cutting-edge high-end head-mounted displays.

We caught up with Roblox chief executive David Baszucki to talk about this latest expansion for his long-running game.

“We have this vision, that over time, social play and great content will be the core of great VR,” Baszucki told GamesBeat. “And finding what me and my friends want to do — if we want to go to the Wild West and have a gun fight — being able to find that environment and content is going to be really important.”

While we’re still in the early days of VR, it’s still difficult for most people to understand its potential. But many people who try it — especially when they do something multiplayer and social — come away from it understanding that it could have incredible power as a communications tool.

This is where Baszucki thinks Roblox already has a built-in advantage when it comes to virtual reality. Roblox is primarily aimed at younger players (although you can find people of all ages who enjoy it), but nearly every game features lots of interaction between large groups of players. Its vast library features team-based shooters and platforming challenges, but it also has a massively multiplayer bird simulator.

“We really focus on being a platform for immersive 3D avatar experiences,” Baszucki told GamesBeat. “Experiences that are heavily social. When you’re playing tag in Roblox; or when you’re working in a pizza restaurant; or when you’re flying as a bird — you’re there to have fun and be with your friends and to create things together. So it’s less about whether you are seeing it on a phone or on the PC or Xbox — they’re experiences that you can play really well together.”

GamesBeat has already praised VR releases like the HTC Vive’s Hover Junkers, which is an online multiplayer shooter with a lot of smart communications elements. Roblox could provide a space where people of all ages can enjoy that kind of interpersonal interactivity without Hover Junkers’ liberal use of vulgar hand gestures.

New tools for a new platform

While Roblox already has “15 million experiences,” VR clearly benefits when developers build specifically for its quirks. And Baszucki knows this. The developer isn’t just slapping its made-for-2D-screen games into VR.

“You know, Roblox is already virtual thumbpads on smartphones. It’s mouse-and-keyboard on PC. On Xbox, it’s a gamepad. With VR, we’ve moved camera controls to the headset, and we’ve done a lot of optimization for that,” he said. “We’ve eliminated unexpected accelerations and other things that would cause discomfort.”

Baszkucki gave an example regarding character deaths. In Roblox on other platforms, your avatar goes flying into the air with a rag-doll effect when you die. But that led to some people feeling ill, so the studio changed it to a third-person camera during these moments. Roblox for Rift also doesn’t have a heads-up display that permanently attaches to your vision.

It isn’t all about optimization of existing content. Baszucki’s team has built new features into the Roblox Studio tools that enables Roblox’s 300,000 creators to make VR-specific experiences.

“Yes, we are already playing existing content in VR,” he said. “We’ve done a lot of work in advance to ensure everything runs out of the box. But we have an avenue to build for VR, create for VR, and make money from VR.”

In the Roblox Studio app, community developers will now see a number of options for making their games more VR friendly.

“When our developers create VR experiences, they have a lot of control over which platforms their creation is accessible from,” said Baszucki. “The default is set to everything, but you can make a VR-only experience. It will only show up in VR.”

And targeting that audience could prove lucrative for Roblox creators because the Oculus Rift audience is inherently affluent. Those gamers can afford a top-of-the-line PC as well as a $600 headset peripheral. They may also have some cash to put into microtransactions in Roblox games.

“There’s an early VR excitement phase,” said Baszucki. “Roblox’s strength has always been both capitalizing on the early phase but playing the long-game as well.”

And that long-game comes from having an enormous army of people building content, and it’s unlikely that any other game will match its volume and variety any time soon.