Developer Yacht Club Games revealed that its 2D platformer has sold over 1.2 million copies across all platforms, which includes PlayStation 4, Xbox One, Wii U, 3DS, Vita, PlayStation 4, PC, and even Amazon Fire TV. It’s an impressive feat for an independent game from a small studio.

“Shovel Knight joins Stardew Valley in the ‘indie 1 million club,’ which is a rare achievement,” noted VentureBeat Insights. “While triple-A titles perform well, selling millions of copies with relative ease, the average sales rate for a game on Steam is only 32,000 units according to Steam Spy. It goes to show that high-quality titles can still win, even without large marketing budgets.”

Shovel Knight was originally crowdfunded on Kickstarter, where it raised $311,502. It first launched on Wii U, 3DS, and PC back in June 2014. Critics and gamers immediately praised the game for its retro style and mechanics. Other versions soon followed, but Shovel Knight has sold best on its original platforms. 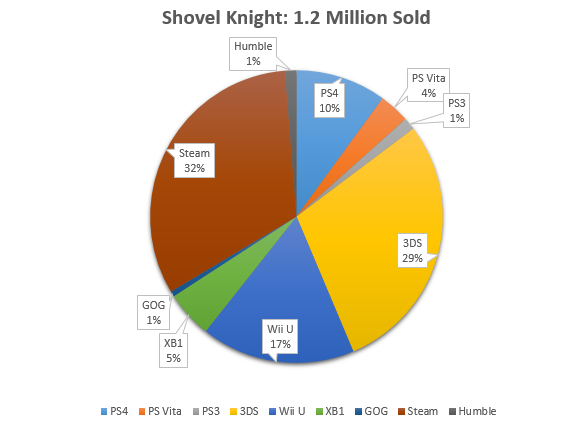 Above: Shovel Knight sales by platform.

The Steam version has sold the most (largely thanks to the many discounts games benefit from on that platform), with the portable 3DS right behind it. It’s impressive that the Wii U version has done so well, since that console’s sales have lagged behind competitors PlayStation 4 and Xbox One. However, the Wii U version had a head start (it came out June 2014, while the PS4 and Xbox One versions released in April 2015). Nintendo has done a good job promoting Shovel Knight, even allowing Yacht Club to create an Amiibo based on the game’s hero. It has sold 180,000 figures.

While Shovel Knight was only a digital game for a long time, it eventually saw a physical release for PlayStation 4, Xbox One, Wii U, and 3DS. Yacht Club Games noted that the physical release made up 200,000 of the 1.2 million total sales.

Yacht Club has also done a good job keeping the game relevant with new content. Besides the Amiibo, the company released a new character campaign in the Plague of Shadows update last September. It was a huge amount of content to give away for free, with Yacht Club noting that it spent $1 million developing Plague of Shadows. However, it helped boost sales of Shovel Knight. The game actually sold more copies in November 2015 for Wii U, 3DS, and Steam than it did in November 2014.