You don’t need to make a blood pact with a demon or sacrifice a virgin lamb to get Hearthstone: Whispers of the Old Gods to come out sooner. Its release is imminent.

Blizzard revealed today that the latest expansion for its digital card game comes out on April 26 in the Americas and Europe (it releases in Asia on April 27). Whispers of the Old Gods will add 134 new cards to Hearthstone, which players can purchases from the in-game store. The digital card game market is worth $1.2 billion, and Hearthstone easily leads the field. Joost van Dreunen, analyst at market research firm SuperData Research, told GamesBeat that Hearthstone makes $20 million a month. The free-to-play game is available on PC, Mac, iOS, and Android devices.

Expansions like these are important for keeping players engaged, which makes them more likely to continue buying more cards. The last set of new cards came out with November’s The League of Explorers adventure. Blizzard usually waits four to five months before launching new content, either in an expansion or adventure. The last set, The League of Explorers adventure, debuted on November 12, 2015, so this has been on the longer side of that spectrum. 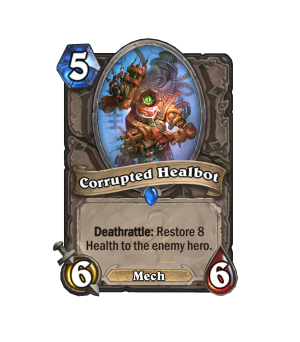 Above: Watch for those syringe guns!

Blizzard confirmed to GamesBeat that the expansion also brings Standard and Wild modes. Wild uses every card from every expansion and adventure since Hearthstone’s release, while Standard phases out cards from the older sets. This should make it easier for Blizzard to balance its game and keep things fresh for players that get tired of seeing the same powerful minions and spells show up in every deck. At its launch, Standard won’t include cards from the Goblins vs. Gnomes expansion and the Curse of Naxxramas adventure. This will also bring changes in power levels (called nerfs in gaming circles) to some of Hearthstone’s cards, although we don’t know exactly which ones yet.

Blizzard is also hosting a streaming event on Twitch on April 21 at 10 a.m. Pacific with lead designer Ben Brode that will reveal more cards from the new set.

Some of the new cards in Whispers of the Old Gods are corrupted versions of old favorites. For example, the Corrupted Healbot restores 8 health to the enemy hero once it’s killed, while the original Antique Healbot (which won’t appear in standard) restores 8 health to your own hero as soon as you played it. Four of the most powerful cards in the expansion are the Old Gods themselves, and they can become stronger if you play their followers in the same deck, which are minions that will boost an Old God’s stats before they enter the battlefield.

Players can purchase 50 Whispers of the Old Gods packs for $50 (but they can’t open them until April 26), a deal that will go away once the expansion launches.