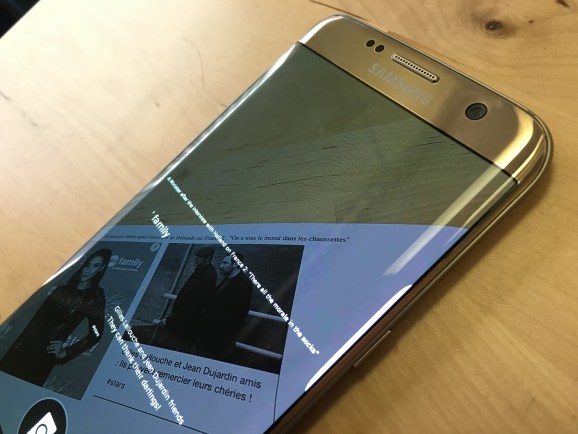 Microsoft Translator translating from French to English on Android.

Microsoft today announced a useful update for its Microsoft Translator app for Android. Now the app allows users to take a photo with an Android device’s back camera — or select a photo that’s accessible to the device through local or cloud storage — and then get a quick translation of the text inside the photo.

For Microsoft, it’s all about convenience.

“With the new image translation feature in the Translator app for Android, you no longer need to type text or say foreign language phrases out loud when you see them written on signs, menus, flyers…whatever,” the Microsoft Translator team wrote in a blog post. “Instead you can translate pictures instantly from your phone, with the translation appearing in an overlay above the existing text.”

The new feature for the app — which came to iOS in February — does make it more competitive with Google Translate. Last July, that app received an update that Microsoft has not yet succeeded in replicating: You hold up your camera to text to see it translated instantly. From there you can also iteratively translate the text into other languages (you can do also do that in Microsoft Translator), or you can copy the text to the clipboard, or share it, or blow it up in large type to make it easier to read (those things you can’t do in Microsoft Translator).

Today’s app update also enables devices with Android Marshmallow or Android N to translate text in any app, without switching apps. “If you find a foreign language phrase you need translated, just highlight it and open up your ‘Other Options’ (the three dots after Cut, Copy, and Share). From the list, choose ‘Translator’ and you’ll be able to translate into any of the 50+ languages supported by Microsoft Translator,” the Microsoft Translator team explained. Google Translate for Android can do something similar.

Updated on April 21 to acknowledge’s Google Translate’s ability to provide translations in other apps.