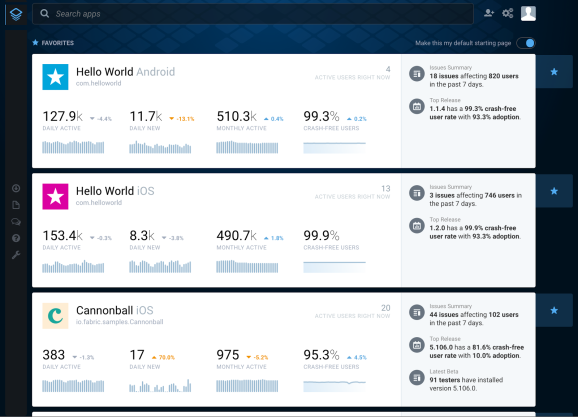 Twitter has made it easier for developers to monitor their Fabric-powered app’s performance with the launch of a new dashboard. Called Fabric mission control, it provides insights and “critical top level information” for all supported Android and iOS apps under a single interface. Rolling out today, it’ll be the default dashboard when using Fabric, and everyone should gain access to it over the next few weeks.

“Most app builders monitor more than one build, whether it’s across iOS and Android, or across their nightly, beta, and production builds,” explained Meekal Bajaj, a Twitter product manager. “We heard from our users how valuable it is to them to be able to easily see all of this information in one place to make sense of their performance across platforms.”

With Fabric mission control, developers will be able to monitor how their app is doing and see what issues need their attention. The dashboard surfaces key metrics like daily active users, new users, monthly active users, and crash-free users for apps, while also notifying developers about things that need review within the Fabric platform. It displays information from Crashlytics, Answers, and Beta, and Bajaj said more services will be added in the future — Stripe, Amazon Web Services, Fastlane, and Optimizely won’t be available quite yet.

The dashboard can also be customized to display apps developers are interested in monitoring.

“We see mission control as a great way for teams to build a shared understanding of how their apps are doing and see highlights for things that need their attention,” he stated. “We find ourselves using it all the time to directly navigate to things we care about, such as how our latest release is doing, or jumping straight to the crash-free users dashboard. We also have it up on the wall as a dashboard that the entire team uses to get a pulse of how all our apps are doing.”

This might seem like a copy of Mixpanel or New Relic, but Bajaj said Fabric mission control goes a step further than those app monitoring services. Specifically, it will identify areas of the app that need immediate attention by calling out issues “impacting a large part of their user base, showing them how their latest build is doing, and when they send out a new beta build, what its adoption has been.”

Fabric launched in 2014 as a developer platform, complete with several SDK tools, one to incorporate tweets into third-party apps, another to bring in MoPub-powered ads, and the last to provide crash reporting through its Crashlytics service.

Simplifying the various views and interfaces into a central dashboard will likely improve the overall experience for developers. And any extra effort could go a long way, as Twitter continues its work to rebuild relationships with the developer community. Of course, with a Fabric-powered app on more than 2 billion active devices, it’s not surprising that better app management and monitoring is needed within the Twitter developer platform.

Although Twitter has released a Fabric app for iOS and Android, the mission control dashboard is currently only available on the Web.