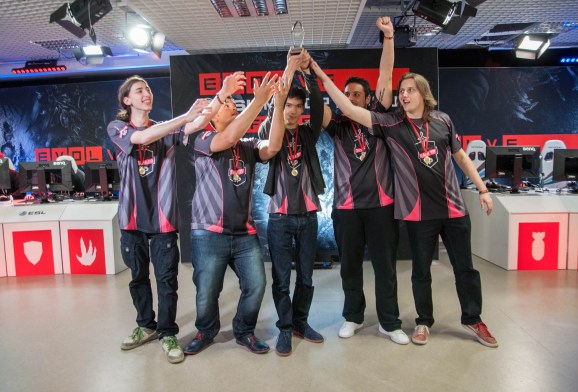 Team YP has competed at ESL events before, but the league wants to cut ties.

As competitive gaming strives for mainstream acceptance, one of the biggest organizations is forcing out a sponsor that specializes in pornography.

This move comes as esports is on pace to generate $463 million in revenue this year. Most of that money comes from sponsorships, and that is certainly where ESL makes the bulk of its cash. Additionally, ESL often works with game publishers to promote their games through tournaments and other competitive events, and the organization told Team YP that some of those publishers draw up contracts that prohibit any participation from pornographic brands.

ESL provided GamesBeat with the following comment in response:

“Advertising pornography is not legal in the markets we operate in, and the vast majority of partners we’re working with have strict ‘no drugs, no alcohol, no pornography’ rules that we’ve contractually taken on board. These aren’t new rules but ones that have been in our rulebooks for a long time. We have spoken to Team YP manager earlier this year, and in that conversation we’ve explained the situation and rules in detail and offered to look for potential alternatives in a bigger group. At the same time, we’re consulting with our legal teams about this. We will inform the team and the management as soon as we have any updates.”

For Team YP, this is going to limit its potential to compete, which — in the end — is going to hurt its members and those who enjoy watching them compete.

“I am disappointed that Team YP’s growth is being stunted by this decision, not to mention the effect that this will have on our roster of players,” Team YP manager Claire Fisher told GamesBeat. “While for some, our participation in esports has been controversial, stopping our players from competing because they are sponsored by us, in spite of Team YP operating as a completely SFW [safe for work] brand, clearly separated from any adult content, seems unfair to say the least.”

Above: A blurred-out Team YP logo.

But when even all of that work was not enough, Team YP has gone as far as completely removing all references to even the two-letter “YP” identifier. In December, publisher Capcom wouldn’t permit Team YP to wear its typical jerseys, so the group introduced a censored alternative instead.

The censored shirt is clever, but it’s also not exactly subtle. And Team YP understands this, which is why it offered to go through a complete rebranding in the face of ESL’s new rule.

Here is how Team YP put the appeal to ESL’s operations bosses in an email late last month:

“In the end, this is mostly impacting the income of gamers who want to be sponsored,” said Fischer. “Without which, esports wouldn’t be able to operate in the way that it does.”

Of course, the ESL and its publishing partners have every right to decide what kind of companies they do business with. But it also seems like a potential overreach for ESL and those publishers to tell players that they cannot compete if they take money from the wrong sponsors — especially when ESL and publishers often do not pay a salary to those individuals. So this might come across as a couple of corporations attempting to protect their image at the expense of the people who make their competitive games worth watching in the first place.

“We feel like this rule has been implemented in direct connection to our sponsor’s efforts,” Team YP’s Rainbow Six: Siege and Evolve captain Eril “YP_Nightwane” Djoehana told GamesBeat. “It was only created after we started entering ESL cups and started getting noticed.”

Street Fighter pro Anton “Filipinoman” Herrera points out how this has him frightened for his personal income.

“[ESL is] taking away opportunities for players to compete,” he told GamesBeat. “At any time, my sponsor could revoke their sponsorship from me or from any of their teams because we are unable to perform with [the YP] tag and branding.”

“What is even more upsetting for my team in particular is that we were worried about these kinds of problems,” said Nightwane. “We decided to be proactive, and we asked both [Evolve publisher] 2K and ESL how they felt about our sponsorship, and they were both very happy to accept Team YP as a participant. This leaves us confused on why this ruling has been made. We would love to continue competing with other teams within the ESL while being sponsored. We have always strived not to cause any troubles, and we want to follow the rules properly.”

“Luckily, we have an understanding team, team manager, and vice president,” said Filipinoman. “And they are equally level-headed when having discussions with the heads of the eports competitions we are trying to get into. Sadly, finding a middle ground has always proven to be near impossible, as there is no room for any open discussion.”

“Our experience with Team YP has been nothing but positive thus far,” he said. “We are well-treated by Team YP, and we are never pushed to promote or be linked to any mature content. Moreover, none of their content is harmful to anyone. I do not think there is any cause for this harsh punishment for a sponsor and team, especially since they are only trying to support the scene and its players.”

Updated at 1 p.m. Pacific on April 24 with a comment from ESL.

Updated at Noon on April 25 to correct implication that the ESL rule is new.