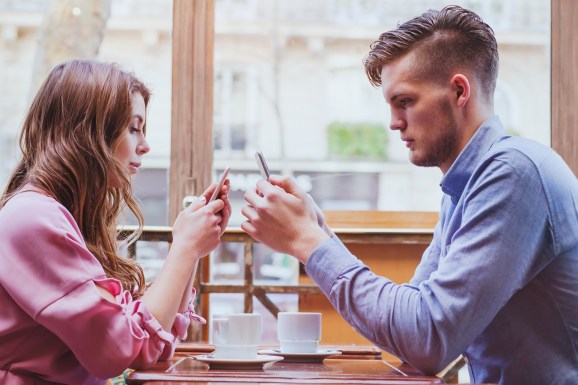 You might be surprised to learn that the most addictive mobile apps aren’t necessarily the same apps that top the store charts.

Take a look at the list below (click to enlarge), based on data collected by my business division at SurveyMonkey, SurveyMonkey Intelligence.

Facebook is the most addictive app on mobile – and by a large margin. On average, users engage with the Facebook app 5.8 days a week, a full day more than almost all the other apps on the list. Maybe that’s no surprise, but what about the rest of the apps on the list?

Most downloads end up on the last page of your phone’s app screens and stick around like discarded old toys. So what do the apps you actually open every day have in common?

The most addictive apps give you something new every day
Facebook’s news feed is always changing, even minute to minute. Timehop, ranked 6th, gives you just 24 hours to view the photos from your past; if you snooze you loose. Likewise, Snapchat messages can get stale fast, and new deals load in daily on coupon and deal apps. Fresh content spurs more usage.

If apps don’t revolve around content, they are strong on utility
The list is scattered with apps that provide daily utility, even if it’s similar. Users seems to constantly use Power Battery and 360 Security to keep their phone in top shape on Android. Additionally, fitness, calorie, sleep, and mileage trackers also make their way onto the list.

Many of these top-used apps are popular with teens
It’s probably no surprise, since teens use their phones all. the. time. Teen usage help apps like Snapchat, musical.ly, Neko Atsume, iFunny, Covet Fashion, Whisper, Kik, and Instagram make this list.

Messaging apps make up a fifth of the list
What’s more important than using your phone for staying in touch with others? That’s what the phone was made for right? Apps like Snapchat, WhatsApp, GroupMe, Kik, Line, and Facebook fill this need.

Dating apps keep users hooked
It’s not surprising that the rush of emotions from a flirty message or list of fresh matches can keep people coming back to dating apps day after day.

Fitness apps are actually working
Maybe these apps are actually helping people stay on top of fitness habits. Or maybe they are only used by fitness junkies who already exercise frequently. Either way, many calorie and exercise trackers make the cut.

Turn-based games top all the games on the list
It seems that the social pressure of playing your turn is enough to push Words with Friends and Yahtzee with Buddies into the top 10. Both games need you to take your turn, otherwise your friend can’t continue playing with you.

No single company dominates the list
If you look at the top free or top grossing charts, you will see a few names like Facebook, Google, Supercell, and King dominate the lists. But, interestingly, that’s not the case when looking at the most sticky apps.

See anything else worth calling out? Let us know.

Abhinav Agrawal is VP of SurveyMonkey Intelligence, which provides competitive intelligence on mobile apps. Before that, he was CEO and cofounder of Renzu, entrepreneur in residence at Social Capital, VP of Games at Zynga, and a product manager at Amazon. You can follow him on Twitter: @agrawal667.

Arjun Lall is head of product for SurveyMonkey Intelligence. Before that, he was COO and cofounder of Renzu, entrepreneur in residence at Social Capital, director of product at Zynga, and cofounder of JamLegend. You can follow him on Twitter: @_arjun.