(Reuters) – A Buddhist temple on the outskirts of Beijing has decided to ditch traditional ways and use technology to attract followers.

Longquan temple says it has developed a robot monk that can chant Buddhist mantras, move via voice command, and hold a simple conversation.

Named Xian’er, the 60-cm (2-foot) tall robot resembles a cartoon-like novice monk in yellow robes with a shaven head, holding a touch screen on his chest.

Xian’er can hold a conversation by answering about 20 simple questions about Buddhism and daily life, listed on his screen, and perform seven types of motions on his wheels. 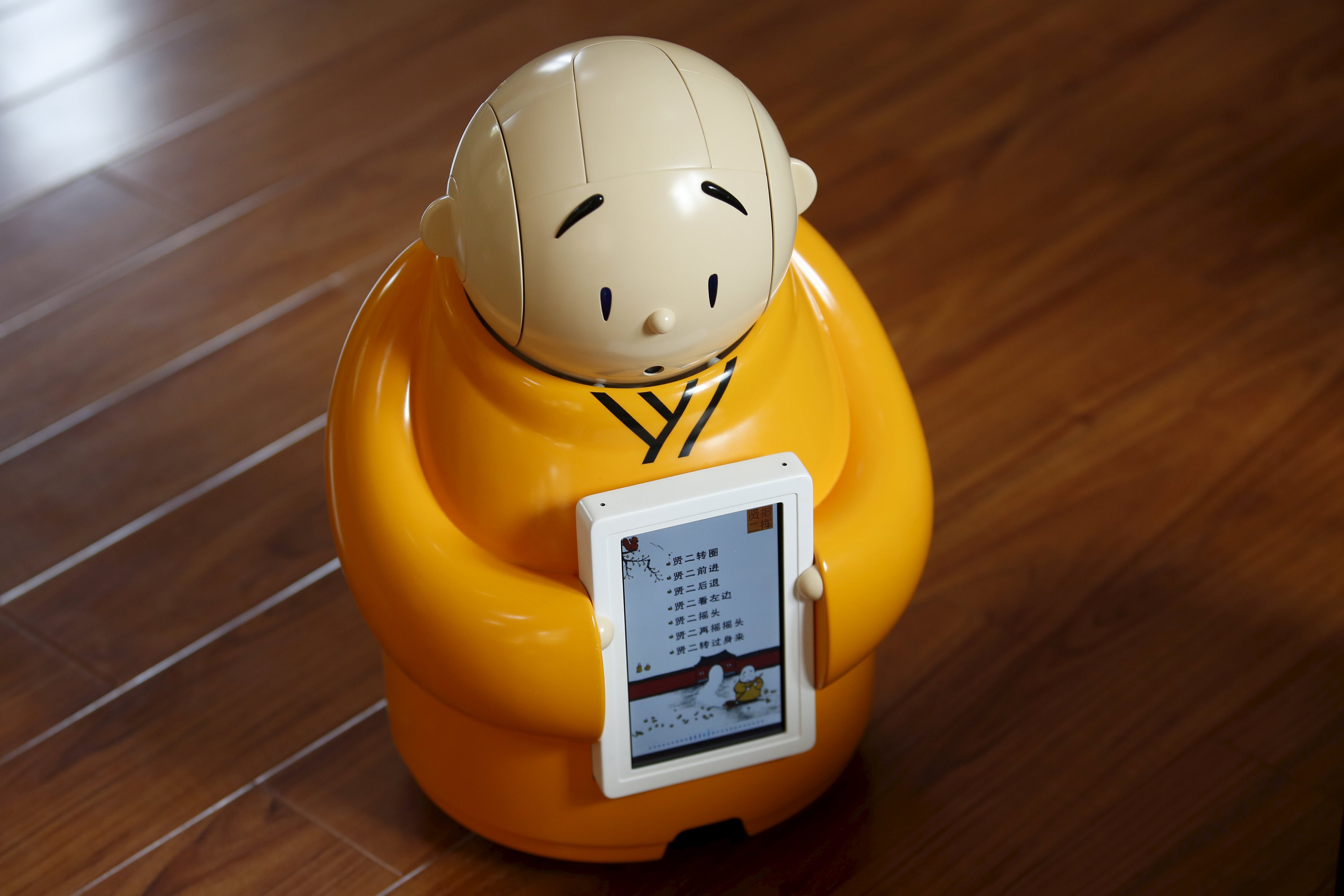 Above: Robot monk Xian’er is pictured during its demonstration for a photo opportunity at Longquan Buddhist temple on the outskirts of Beijing, April 20, 2016. REUTERS/Kim Kyung-Hoon

Master Xianfan, Xian’er’s creator, said the robot monk was the perfect vessel for spreading the wisdom of Buddhism in China, through the fusion of science and Buddhism.

“Science and Buddhism are not opposing nor contradicting, and can be combined and mutually compatible,” said Xianfan.

Under the careful watch of China’s officially atheist Communist Party, religion has slowly crept back into daily life since reforms got going several decades ago.

“Buddhism is something that attaches much importance to inner heart, and pays attention to the individual’s spiritual world,” he said.

“It is a kind of elevated culture. Speaking from this perspective, I think it can satisfy the needs of many people.” 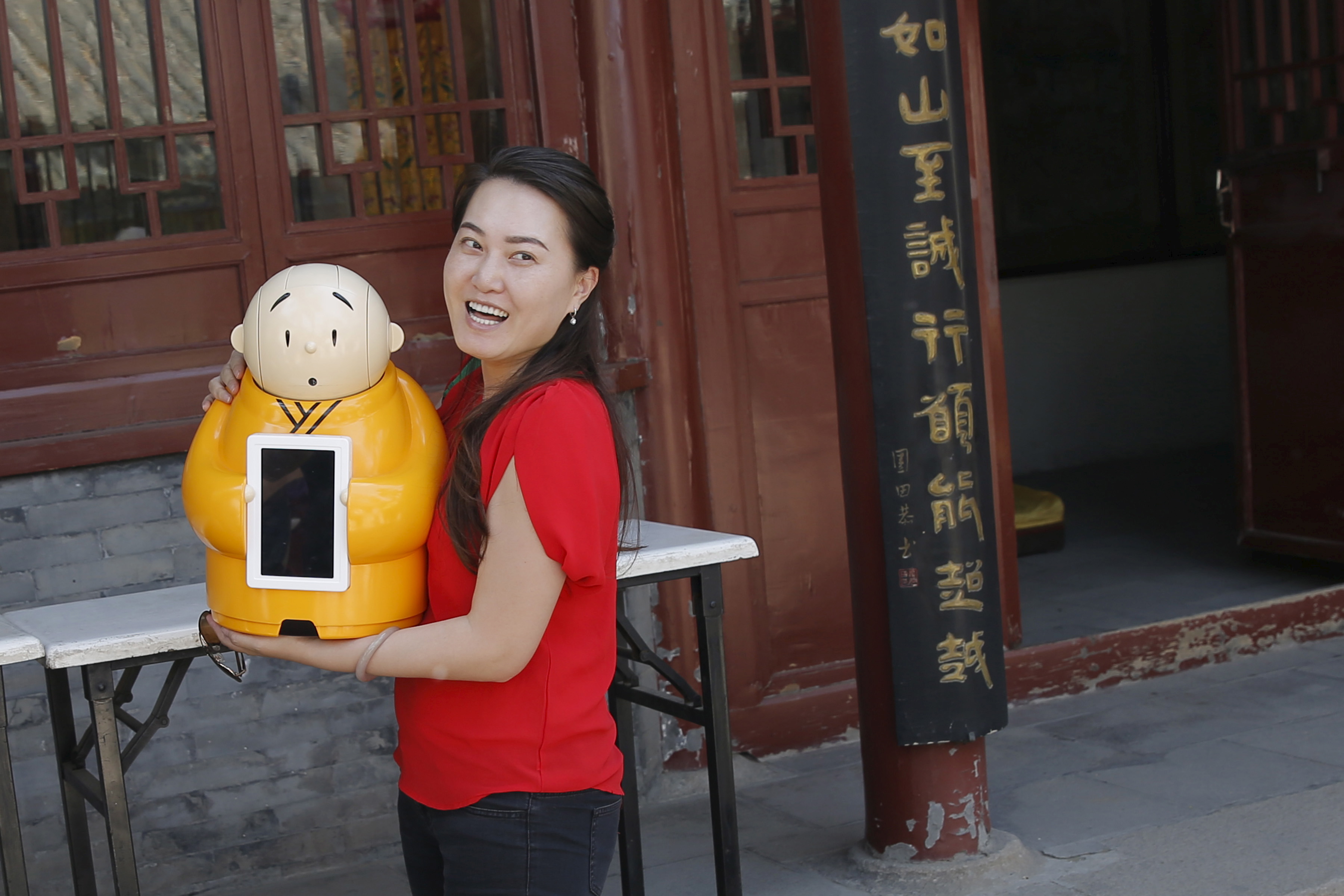 Above: A visitor smiles as she holds Robot Xian’er which is placed in the main building of Longquan Buddhist temple for photograph by the temple’s staff, on the outskirts of Beijing, April 20, 2016. REUTERS/Kim Kyung-Hoon

The little robot monk was developed as a joint project between a technology company and artificial intelligence experts from some of China’s top universities.

It was unveiled to the public in October.

But Xian’er is not necessarily the social butterfly many believe him to be.

He has toured several robotics and innovation fairs across China but rarely makes public appearances at Longquan temple.

Xian’er spends most of his days “meditating” on a shelf in an office, even though curiosity about him has exploded on social media.

Xian’er was inspired by Xianfan’s 2013 cartoon creation of the same name. The temple has produced cartoon animations, published comic anthologies, and even merchandise featuring the cartoon monk.

“He looks really cute and adorable. He’ll spread Buddhism to more people, since they will think he’s very interesting, and will make them really want to understand Buddhism,” she said.

The temple is developing a new model of Xian’er, which it says will have a more diverse range of functions. 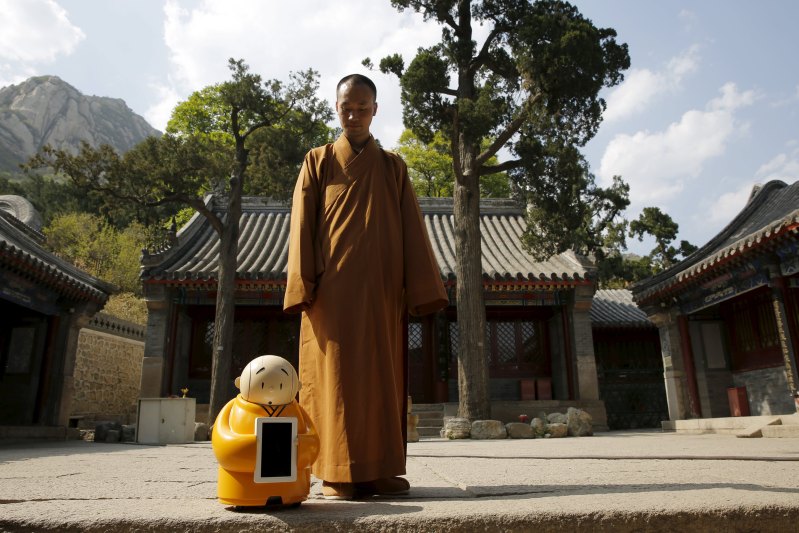 Above: Master Xianfan looks at robot monk Xian'er as he prepares to pose for photograph in the main building of Longquan Buddhist temple on the outskirts of Beijing, April 20, 2016. REUTERS/Kim Kyung-Hoon