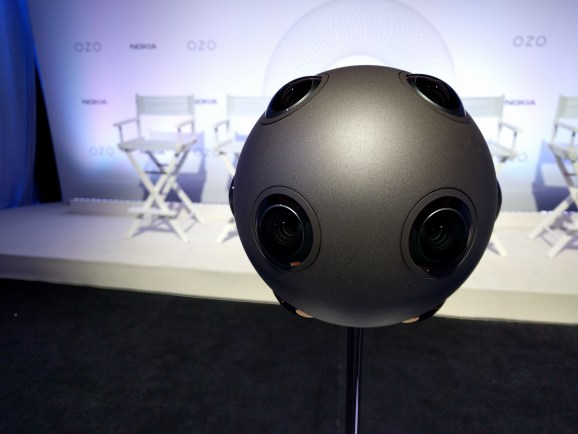 The Nokia Ozo virtual reality camera, on display at a Nokia event in Los Angeles on November 30.

Disney is boosting its virtual reality credentials today with the news that it has signed a multiyear deal with Nokia to provide the hardware and software to create complementary content around Disney’s theatrical releases.

VR is the clear breakout trend of 2016, with more companies embracing the medium for various use cases. Just last week, AOL acquired VR content studio Ryot to bring immersive video to the Huffington Post, which followed the New York Times’ very own slate of VR films announced back in October. Elsewhere, VideoBlocks recently became one of the first stock media companies to offer 360-degree / VR content for creatives.

Since offloading its Here mapping unit and selling its mobile phone division to Microsoft, Nokia has consisted of Nokia Networks, a broadband network infrastructure business; and Nokia Technologies, a division that aims to keep the brand alive in the public realm. The Ozo is one of these products from the latter, featuring real-time VR preview and 3D 360-degree spatial audio and video capture with multiple on-board lenses.

With the likes of Oculus Rift, HTC, Samsung, Huawei, and Sony all building hardware to cater to the immersive video movement, and publishers keen to embrace it, Nokia is pushing to become the de facto camera brand for capturing and creating the content. Nokia’s Ozo VR camera started shipping to the professional movie-making fraternity back in March for a hefty $60,000, though it can also be rented for short-term projects through third-party resellers.

As part of its agreement with Disney, Nokia will provide VR equipment, software, and support. The two companies have already worked together on videos relating to the recent release of the Jungle Book remake, including two 360-degree videos based on the red carpet premiere and a cast interview.

“We aim to bring extraordinary experiences to audiences around the world, and specially created VR content is one more way we can transport people even further into the worlds our filmmakers create,” said Jamie Voris, chief technology officer, The Walt Disney Studios, in a press release.

Disney also recently released a teaser trailer for the Jungle Book, initially as an exclusive through Samsung’s Milk VR app for the Gear VR headset, though it’s not clear whether Nokia was party to that. Last year, Disney led a $65 million funding round into Jaunt VR, a company that also builds VR camera technology, and it has been clear for some time that Disney wants to be seen as an early adopter. But it hasn’t yet committed to creating feature-length VR movies — for now, it’s more about “extras” and promotional material, which is indicative that virtual reality isn’t quite ready for prime time.

“Ozo will help Disney bring their film properties to life in new ways through immersive entertainment experiences, and our focus will be on helping them get the most out of VR as they begin to uncover all that it has to offer,” said Ramzi Haidamus, president at Nokia Technologies.