Their new startup, The Night Work Games, is launching a Kickstarter crowdfunding campaign to raise $700,000 to make the game. And they will launch a Twitch livestream at 9 am Pacific time on Monday to talk about the game. Their announcement — foreshadowed by the Star Wars parody video below — comes at an interesting time as Bethsda Softworks begins its campaign to promote Doom, a reboot of the original game on the PC and consoles. That game comes out on May 13, and the new title from Romero and Carmack will come out in the winter of 2018.

Some players have reacted negatively to the new Doom, which has outstanding graphics but has gameplay that differs from the original with a slower pace that is more appropriate for consoles. That may draw attention to the former id Software creators, Carmack and Romero, who want to focus on high-speed, high-skill gameplay that resembles the original title. Their new company is based in Galway, Ireland, where Romero moved with his wife and fellow game designer Brenda Romero.

“The game is about fast, skillful gameplay,” said Romero, in an interview with GamesBeat. “We’ll have rocket jumping, circle strafing. It’s got a different narrative that enables a lot of interesting things. We can play in any kind of reality.” 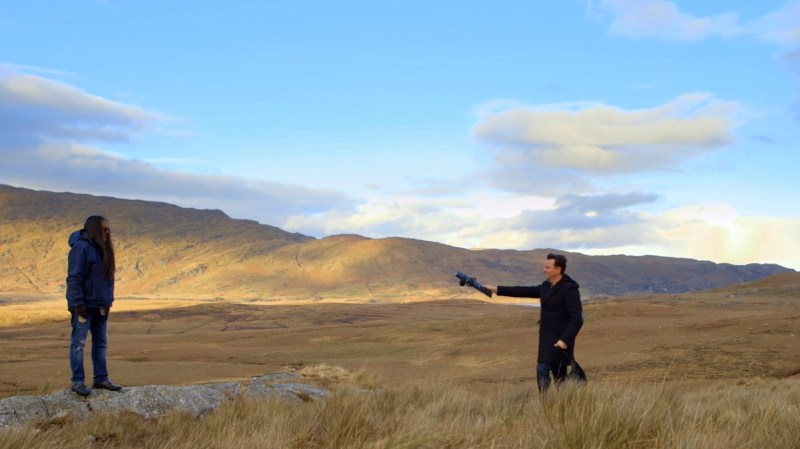 Above: John Romero (left) and Adrian Carmack are making the shooter game Blackroom.

Romero released a brand new level for the original Doom earlier this year, creating a new level for the first time in 21 years. That served its purpose of putting Romero back in the limelight and helping him hone his views on what it takes to make a fun level. That map, Tech Gone Bad, has had more than a million unique impressions.

Romero described Blackroom as a visceral, violent shooter game with a wide variety of settings that focuses on “classic FPS” gameplay with a mixture of exploration, speed, and intense, weaponized combat. You’ll have to be fast to dodge attacks, “circle-strafe” your foes, and “rocket jump” in the single- and multiplayer modes. The game will be fully moddable on PC, and the company will be responsive to community input, Romero said. In the game, you’ll play inside a simulated world in the future that is a logical extension of today’s virtual reality environments. That’s going to make for some very interesting gameplay possibilities, where players will be able to change the parameters of the simulation and “shift to a new reality,” Romero said.

The game will have a variety of multiplayer modes, cooperative play, 1-on-1 deathmatch, and a free-for-all arena. The locations include hardcore military sims, hellish infernos and interstellar space. The single-player campaign will last more than 10 hours, and it “will span wildly varied environments, from ruined Victorian mansions to wild west ghost towns to swashbuckling pirate galleons and beyond.” The title will have six multiplayer maps when it ships, and community members will be able to create their own mods. (By contrast, Doom won’t be “moddable.”) Players can also have dedicated servers and play challenge modes such as speed running.

In its description, the company says “the Blackroom technology allows users to be anywhere at any time, creating fully-realized holographic worlds that are indistinguishable from reality, all inside of a giant black room. When testing of their new leading-edge Predictive Memory technology reveals troubling anomalies that blend the real world with the virtual, you’re sent in to investigate and are swept across a staggering and dangerous array of simulations developed for Blackroom users, from medieval castles to horror sets. Peering into your mind and tapping into your deepest memories and fears, however, it’s clear that the Blackroom is not all fun and games.”

Romero said the holographic world features a device called the “Boxel,” which players can use the influence the simulation and change the environment, weapons, and enemies.

“The Boxel is the controller of the simulation,” he said. “You can do so much with it, like making time stop.”

Romero will serve as game designer and level designer, while Carmack is the art director. They cofounded id Software (along with Tom Hall, who is now at Glu Mobile, and John Carmack, who is at Oculus VR) in the early 1990s. The team churned out Commander Keen in 1990, Wolfenstein 3D in 1992, Doom in 1993, and Quake in 1996. Romero left in 1996 after the release of Quake, and Adrian Carmack (who is not related to John Carmack) left in 2005 during an acrimonious legal battle.

Romero said he had kept in touch with Adrian Carmack over the years. They met after QuakeCon, an id-focused fan event, in 2014, while Romero was en route to Ireland with his wife. They met again in Ireland later and then agreed to make a game. 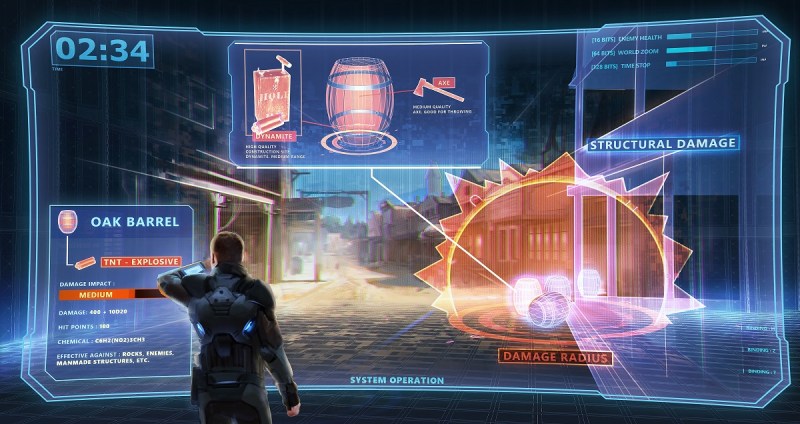 Adrian Carmack said, “It’s been great working with John again, and we’re really setting out to produce a visceral FPS. Because of the Blackroom’s setting, we have a lot of freedom to create environments that players might not expect in an FPS. Blackroom’s technology lets its users enter just about any universe imaginable, and gives them the power to alter the world. That gives me lots of artistic freedom.”

The game is targeted for the PC and Mac, digital-rights-management free and on Steam. Romero and Carmack released a funny Star Wars parody video last week, and they’ve been inundated with resumes. Romero said he hopes to hire a team of around 20 people or less, after the Kickstarter is funded.

“It’s more fun working on a game with a smaller team,” he said. “I know it will be a blast.”

“I’ve been planning this game for about a year now, and we’re getting to the point where there is nothing else taking up my time,” he said. “Making a shooter that today is very different. We’ll use a brand new engine. It looks great with physically based materials, runs very fast, and enables abstract level design.”

Romero said the game will have humor in it. He said it was inspired by thinking about he future of virtual reality and where advanced technology will go.

“We wanted something where you could be in Boot Hill in a showdown in a Wild West town. A door opens and then you are in a castle and the ceiling is falling. What just happened?”

Brenda Romero is helping where needed, and their children will likely test the game. DDM, an agency that assists game studios, is helping to manage the Kickstarter campaign.