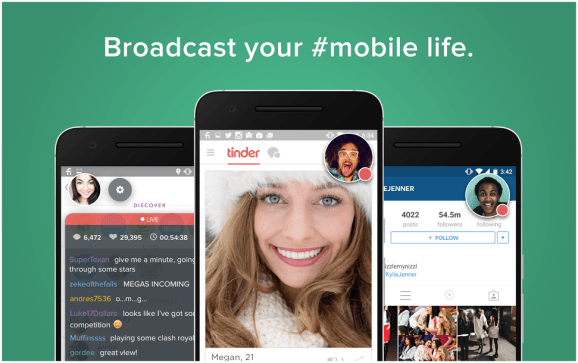 Kamcord wants you to stream your online dating.

As livestreaming gamplay from mobile grows more crowded, one of the growing startups in this space is expanding to include way more than Clash of Clans.

Kamcord, a video network that enables people to broadcast their gaming action from their tablets and smartphones, has raised $10 million in its latest funding round. This brings its funding total to over $37 million. Time Warner approached Kamcord and asked to invest the cash at a $100 million valuation. This comes as the video company shifts to an “appcasting” strategy where people can livestream themselves using apps like Tinder, Instagram, or anything else. This should grow its audience of 1 million viewers

Kamcord sees a potential to step into a gap in the market for people who don’t play games and who struggle to find anything interesting to point a video camera at. While Kamcord is already finding success with its gaming business, it is now entering an even wider market that is worth multiple billions of dollars to companies like YouTube, Periscope, and more.

“We’ve realized that the smartphone camera has given birth to multiple billion-dollar companies,” Kamcord cofounder Adi Rathnam told GamesBeat. “Instagram captures the world around you, and it’s built an empire off the back camera of your phone. Snapchat has carved a billion-dollar business off of the selfie-cam. And we realized is that there is actually a third camera on your phone: the screen.”

Kamcord thinks that, for a lot of people, capturing the stuff happening on their phone screen is potentially more interesting than the photos they might take with a camera. It has already seen this with gaming, but now they want to bring that same potential to a different kind of smartphone user.

“You can take any piece of content on your phone and share your candid thoughts on that topic,” said Rathnam. “The app gives you a prompt to react to as opposed to constantly racking your brain trying to come up with something interesting to say.”

The idea behind this is to give people more of a chance to turn into an online personality. Kamcord saw that people would come for Clash of Clans, but then they would end up far more attached to their favorite broadcaster. Now, someone can do the same but for shopping for makeup or using dating websites.

To show people how this might work, Kamcord is already partnering with people who have followings on YouTube and elsewhere. They even have musical artist Redfoo from the group LMFAO using the platform.

Makeup-video creator Wengie has already set up a room on Kamcord to speak with her followers.

Kamcord is likely have some luck bringing in people like Wengie and others because it has a direct way for livestreamers to earn money. Instead of sharing ad revenue (Kamcord doesn’t have ads yet), the site enables viewers to buy virtual goods called “stars” for real cash. These items are worth up to $80, and Kamcord splits that cash with the broadcaster.

This direct funding has already proven itself successful as viewers love getting the attention from their favorite broadcaster and buying a star is one of the easiest ways to do that.

Now, Kamcord needs to teach its audience what to expect from broadcasters. It has already rebranded its site with topics like sports fans and YouTube reactions. And while you may wonder why anyone would want to watch someone using an app, I can tell you that I’m already learning a lot more about Snapchat thanks to a handful of Kamcord streamers.