Lyft has kicked off the next phase of its plan to raise awareness about ridesharing, and it’s targeting everyone across the U.S. The company today launched a nationwide television commercial campaign as a way to not only introduce itself to millions of potential passengers, but to also demonstrate everything that’s wrong about owning a car.

This 60-second spot is in keeping with the creative branding of the company, focusing on how fun and creative it is. Filmed in Los Angeles, the commercial highlights issues many of us have when owning and driving a car, such as dealing with parking tickets, being cited for driving under the influence, getting into accidents, putting up with endless traffic jams, and more. Instead of dealing with all of that, Lyft wants you to abandon car ownership for the peace of mind of having someone else take you around.

“Riding is the new driving,” Jesse McMillin told VentureBeat in a phone interview. As Lyft’s executive creative director, he played a big part in producing the TV spot: “The mode of transportation that Lyft offers is a part of a new wave of how people get around. The audience that [the commercial] really resonates with are millennials and younger groups where that choice is actually serious.”

“I think for us, we are in a moment in time right now where a lot of things are being reinvented and rethought,” McMillin continued. “How can we make sure things in our daily lives are being used as efficiently as possible? It’s exciting that companies [like Lyft] are being a part of the conversation like big brands have been for generations. It’s why we think the broadcast medium is interesting right now — it allows us to reach a new audience, one that we haven’t been talking to a lot. We’re taking this chance to talk to people in a new and different way than before.”

Ricardo Viramontes, Lyft’s creative director, sees the message as being relatable for existing users of the ridesharing app: “It reinforces what is so much fun and encourages you to look at use-cases outside the traditional ones.” And he agrees with McMillin, saying that he hopes the TV commercial will “touch a nerve among folks that may not have been introduced to [ridesharing] overall.”

The company tapped Boulder-based advertising agency Made Movement for the campaign. Lyft cofounders Logan Green and John Zimmer worked together to ensure that Made Movement understood what the company was about, as well as reviewing the first passes, initial cuts, and more.

And while the campaign is targeted toward passengers, drivers also play a role in it. In fact, they’re the heroes in the spots, according to McMillin. “By the nature of what Lyft does, [this TV commercial] tells the drivers that more and more people will be interested in riding Lyft. It creates more potential for them to have more passengers,” Viramontes explained. 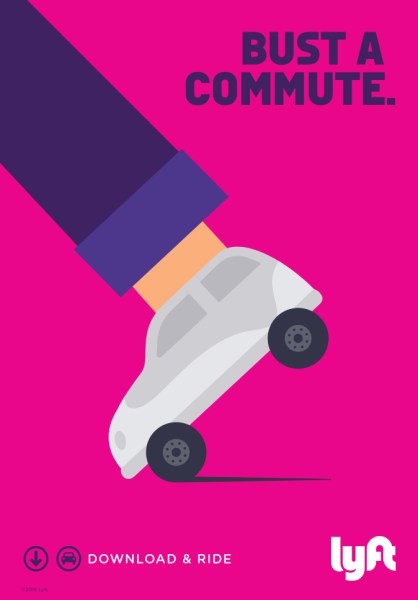 Alongside this commercial is a new “out-of-home” campaign (ads on bus shelters, billboards, etc) that Lyft said will be three times larger than anything it has done to date. Starting today, Lyft will plaster 19 markets and 11 airports throughout the U.S. with updated creative advertisements that were designed and illustrated by Israeli designer Noma Bar. This set of print advertisements will match the nationwide TV commercial, with the aim of “capturing people’s imagination and attention that’s uniquely Lyft’s,” said McMillin.

This campaign is exclusively for Lyft, meaning that there won’t be any carry-over to the company’s ridesharing alliance partners: GrabTaxi, Ola, or Didi Kuaidi.

Lyft’s new nationwide push is designed to raise awareness of the service and the company in an effort attract new users, but also to counter the growth of competitor Uber, which has made itself somewhat synonymous with the ridesharing space. But the commercial is also a good way to differentiate Lyft from its competitors by highlighting Lyft’s quirkiness and suggesting that riding with Lyft will be more fun.

“Lyft is a brand about storytelling, connection, and people,” McMillin stated. “The experience part of it is so important and [the commercial] highlights a way that’s fun, entertaining, and dynamic…it sends out a message to a wide audience that Lyft is doing some interesting stuff.”

And although Uber hasn’t yet launched a consumer-facing TV ad yet — it has one focused on drivers — McMillan isn’t even paying attention, opting instead to “do what [Lyft wants] to do.” “We’re a cool, creative brand. Full stop.”