Sponsored search opportunities can provide consumers new ways to discover apps that they otherwise might have missed and help developers drive more awareness of their software. Although new for Apple, sponsored search results have already been available on Google Play since last year. How will this affect publishers marketing their apps on the Apple App Store?

After Apple launched its App Store in 2008, stories of huge profits from the runaway successes of many apps became a siren’s call for developers to join what promised to be a modern gold rush.  But now with well over 1.5 million apps available, a startling amount of promising new apps are lost in the crowd and are never discovered — shaking developers into the brutal realization of how difficult it is to profit from publishing mobile games and apps

Wildly profitable publishers are outbidding smaller developers out of the vast majority of display inventory where they cannot compete. When mega-successes like King’s Candy Crush Saga and Supercell’s Clash of Clans are able to spend almost half a billion dollars annually marketing their games with predictable, paid advertising, most other apps often don’t stand a fair chance against old titles that dominate the charts.

Another challenge highlighted by Jaya Jha is how massive display ad vendors like Facebook have seemed to make matters worse by implementing  tricky attribution methodologies which over-inflate the performance of their ads. Jha claims that the click-through numbers that Facebook reported were 75 percent above what Google Analytics found and that if Facebook served an ad and the user later goes to her page (whether or not the user noticed the ad), it will still be considered a Facebook conversion, even if the ad was never clicked!

Another game publisher friend of mine recently mentioned how after running Facebook display ad campaigns, his volume of free, organic installs suddenly took a nosedive, no doubt because Facebook was claiming credit for many of the organic installs my friend’s app was already receiving.

But I have some good news. From talking to a variety of app publishers, I’ve found that the majority of the long tail app publishers that are still able to eke out profits from their app business are doing so by ranking high in search results. This keeps their app visible and drives organic installs from users in the critical moment when they are actually searching apps in the store with the intent of downloading. With 67 percent of mobile users reporting that the last app downloaded was found through an app store search, ranking at the top of searches for relevant keywords has become a critical part of the success for mobile apps and games.

Not everyone is optimistic about this change. Nate Swanner of TheNextWeb has concerns that “This effectively prices small companies and independent developers out of App Store search.” And Glu VP Christian Limon adds, “This is pay-to-play, and the big get bigger”

Without yet seeing Apple’s solution, I still have to disagree. This could level the playing field, as search has the potential to be much more distributed across the app ecosystem, provided that Apple’s builds a good paid search system which isn’t only about who bids the most (i.e., ads are sorted not just by Cost Per Click [CPC], but rather, a hybrid model which combines Cost Per Click with Click Through Rate [CTR], which is how Google’s paid search algorithm works). 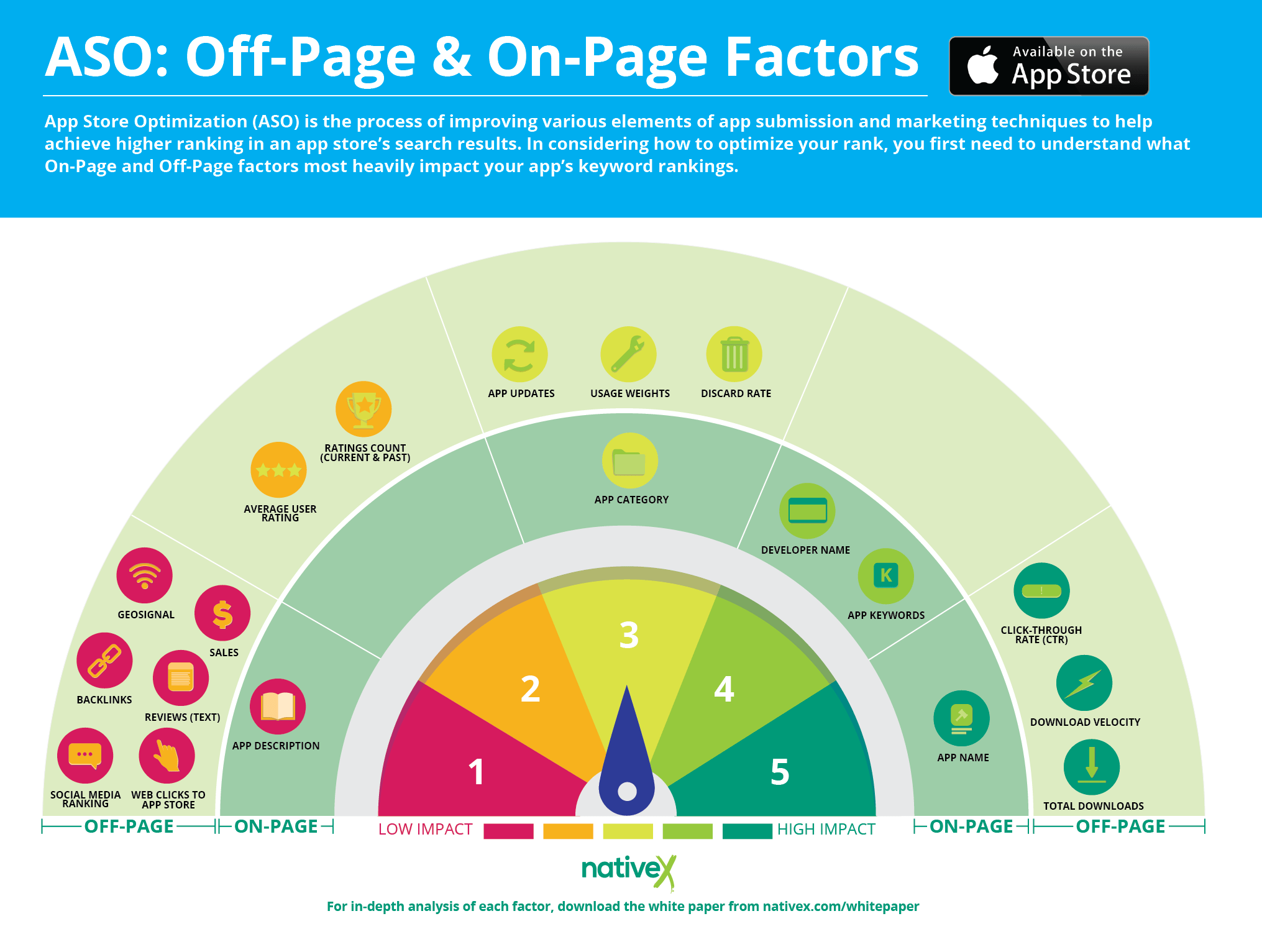 Besides paid search, there is an evolving new field of Search Engine Optimization (SEO) known as App Store Optimization (ASO), which focuses on dissecting how to organically achieve top App Store search rankings.

To help educate publishers and get them started on improving their app’s visibility, I’ve co-authored a free white paper with the cofounder of NativeX on how to improve App Store search rankings.

A key area of interest from the report is the breakdown of On-Page (within the Store) and Off-Page (outside of the Store) factors which can influence the ranking algorithm.

By combing the use of these On-Store and Off-Store ASO tools, app publishers can significantly improve the probability of getting their app’s top search rankings for popular search queries. There are multiple tools to help with researching keywords and improving On-Page ASO factors but my favorites are MobileAction and SensorTower.  There are also tools to help improve Off-Page ASO factors like NativeX’s Search Spike.

Sponsored search from Apple is going to be game changing for many app publishers, when instead of competing against App Store juggernauts for display ad inventory, publishers will be able to focus on the very narrowly targeted paid search placements that are not contextually relevant for the top grossing games, creating a more level playing field.

So the new gold rush will play out over determining which keywords will provide the largest revenue generating opportunity. And smart app prospectors are those who take the right tools into use to locate the veins of golden opportunities and start extracting the treasures that await them.