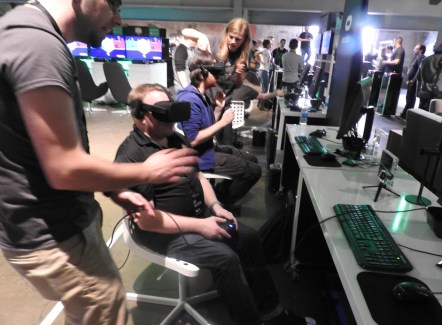 It’s time to move beyond the smartphone screen and into the world of Minecraft.

Microsoft has launched Minecraft: Gear VR Edition on the Oculus Store for $7. This is the VR version of the phenomenally popular block-building game that debuted in 2009 on PC and has since gone on to dominate the world with fans buying millions of copies across desktop, mobile, and consoles. It is now fully functional with the Gear VR, which is Samsung’s headset that uses the newer Galaxy phones as its display. Analysts at SuperData Research predict VR will grow into a $40 billion business by 2020, and Minecraft is the kind of brand that could fuel that kind of growth.

GamesBeat has gone hands-on with Minecraft: Gear VR Edition, and it truly is impressive. While the gameplay and mechanics are all familiar, I found myself feel claustrophobic by the underground caves and in awe of the scale of the world in a way that I never experienced on PC. It’s a fresh way to explore these worlds.

Microsoft and Mojang, which created the franchise, developed Gear VR Edition with input from from famed Doom and Quake coder John Carmack, who is now chief technology officer at Oculus.

“Minecraft is a game that you can both figuratively and literally lose yourself in,” Carmack said in a statement. “In fact, my strongest memories of being inside VR are from the time I’ve spent exploring Minecraft on Gear VR. Experiencing it in virtual reality changes it from an abstract activity to a visceral one — it goes from a sense of playing the game to one of being inside your world, and spinning around to find a creeper sneaking up on you leaves a powerful impression. Infinite worlds have been explored, shaped, and shared by millions of people, and now in VR; that sounds a bit like the fabled Metaverse.”

Carmack is not just trumping up the latest release for the Gear VR, which is his primary responsibility at Oculus. He has invested a lot into getting Minecraft on his VR platform. In early 2015, he told developers at the first Oculus Connect conference that getting the game on Gear was his “quest.”

“I was willing to do just about anything,” he said at the time. “On the phone, I said that if this doesn’t happen, I’m going to cry. This will just be so terrible. This will be the best thing that we can do for the platform. But there are some problems that compilers can’t solve.”

In the end, Facebook chief Mark Zuckerberg and Microsoft chief Satya Nadella had to sit down to ensure they could make this Minecraft deal happen. I guess when a legendary designer like Carmack says he’ll cry, you try to make things happen.

Corrected at 3 p.m. Pacific time: This story originally said that Oculus handled a significant portion of the development, but that is not accurate. I apologize for the error.