The Internet has long enabled people to come together to form communities, fan clubs, and even funding groups — but now one company wants to enable people to use the Internet to help them publish their own games.

Brightlocker is a new kind of game-making platform that wants to combine crowdfunding, crowdsourcing, and social networking to empower people to release a game. The company refers to itself as a “crowd publisher” where the community involves itself in every step of the process. If you have an idea for a game, Brightlocker gives you the tools to pitch it, and then other people vote on their favorite concepts. If the company and the crowd select your game, professional developers build it and ship it, and you get a cut of the revenue. And to fund development, Brightlocker gives people plenty of ways to pay for certain perks. This is a new way of generating income in a gaming industry that is worth $99.6 billion, and it’s one that Brightlocker has put a lot of effort into.

“We’ve gamified the development process for gamers,” BrightLocker cofounder and chief executive Ruben Cortez told GamesBeat. “We’ve gotten them more involved in the creation and idea submission and the selection process, along with general crowdfunding approaches to being able to fund games.”

So far, Brightlocker has used this new concept to make one game, and it is working on a second. Both of these are ideas that originated from within the company because it wanted to prove that it could handle making a game using “crowd publishing.” Light Eaters — a platforming game for iOS — is the first game, and it’s evidence that this idea can work. The company didn’t share details of how big of a budget LightEaters needs, but Cortez told GamesBeat that he is confident they’ll have no trouble funding future games.

“When we open it, we’ll be sourcing ideas for games from the community, which the community will vote on,” BrightLocker product boss and cofounder Eric Schmitter told GamesBeat. “We’re trying to find the golden nuggets within all the ideas the community has.”

And the community will help surface those nuggets because they’ll vote for and talk about the best ideas. This mitigates some risk for Brightlocker because they can immediately see if an idea gets gamers excited. If BrightLocker then executes well, it could also end up with some strong word-of-mouth promotion.

“People want it. They voted it up,” said Schmitter. “If we do things correctly, those same people that are engaged and playing will be our viral factor that will go out and tell all their friends to play. Especially because they can say, hey, I had a part in that game.”

At the same time, people will likely feel invested because they helped pay for the game. Now, BrightLocker’s funding doesn’t work like Kickstarter, where a developer asks for cash to help bring an idea to life. Instead, the company has worked to add gamification elements to everything, and that leads to a lot of opportunities for community members to spend their money.

For example, if I submit my idea to BrightLocker only to find it’s not getting a lot of traction, I could spend some coins that I purchased with real money (about 10 for a $1) to help it stand out.

“Maybe I can highlight it or put it into ad rotation on the front page,” said Schmitter. “That’s all in the hard currency.” 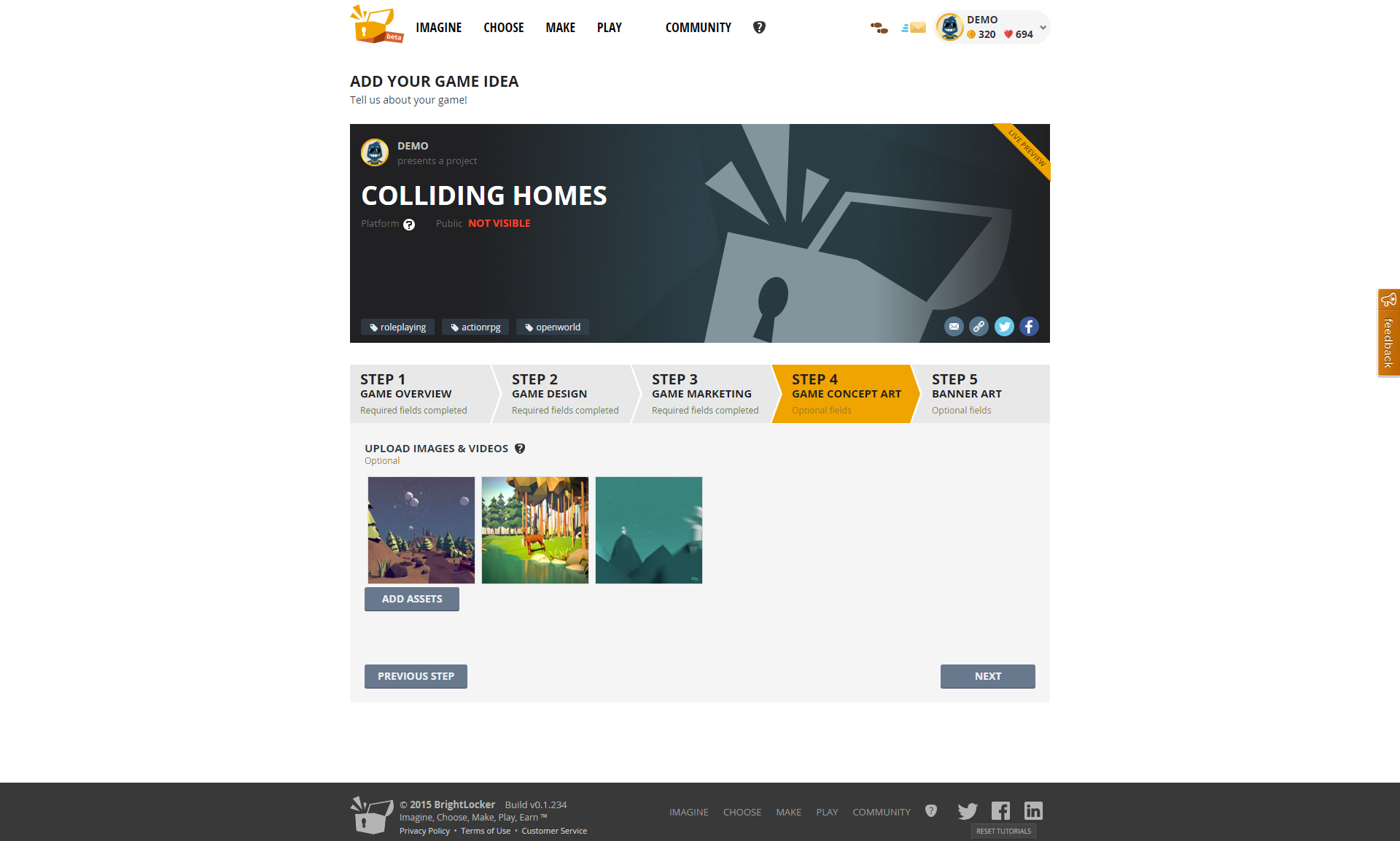 Members of the community can also purchase influence over the voting.

“Our other currency is called votes. Votes are earned,” said Schmitter. “Every time I earn an achievement or do something special, it gives me more votes. But I can also purchase more votes with hard currency as well. What happens is, if you’re an active participant, you’re going to get influence via the votes. If you’re not active, but you still want influence, you can purchase it.”

Finally, BrightLocker is also implementing a marketplace to connect people with various types of skills. If you are building out the pitch for your game, you could potentially find an illustrator in the marketplace who could draw up some concept art for you. This is another way to help you stand out from the crowd.

“We have the whole idea of using the community to help create assets for games that are in production,” said Schmitter. “Allowing them to submit models or sound effects. It’s another way for people to use their votes and say, ‘I like that sound effect better; I think it’s more appropriate for this game.'”

And if the idea still doesn’t end up in the final product, the person who generated the asset still got paid a share of the money. And BrightLocker is going to revert any rights over the assets back to the person who ordered it after a certain period of time.

When not to listen

Finally, while this is definitely a situation of game-design-by-committee, BrightLocker already knows that it will have to provide a lot of guidance.

“They have some great ideas, but what you don’t want is the community telling you all the details,” said Schmitter. “They’re not game developers. They don’t have fiduciary responsibility. It’s a giant nightmare. But what you can do is get inspiration from them and allow them to give you the two-page overview. Then you have professionals who flesh it out and make it into a marketable game. That’s what we’re doing.”