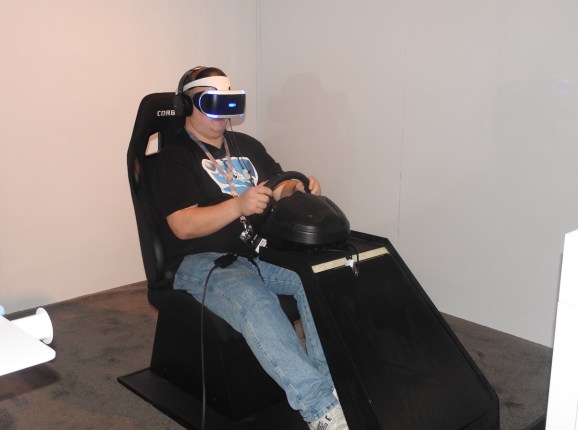 Drive Club using the PlayStation VR platform. You don't want to spin out in this game.

The GamesBeat Summit is the is one of the most important gaming conferences. And since the launch of Oculus Rift earlier this year, count on plenty of excitement in the world of virtual reality at this year’s event.

Working in virtual reality, specifically in the education space, I’m particularly excited about this year’s event. Here are a few VR trends to watch at GamesBeat Summit 2016:

A premium market ecosystem is forming, and it’s exciting to see big studios as well as new projects joining the launches of different platforms. HTC, Oculus, and Sony are just a few of the big names working with gaming publishers in attempts to figure out the best user experiences, user flow and optimal way to make money without it coming across as spam.

Virtual reality is the new frontier in terms of figuring out how all these elements come together. Amy Jo Kim, a world-renowned social game designer and adjunct game design professor at the USC School of Cinematic Arts, is a presenter at the event. Her background alone makes any game designer want to meet her and she will undoubtedly be stimulating discussion around the direction VR game design is headed

The rise of augmented reality

Virtual reality has taken center stage, especially in the gaming world, but I believe augmented reality (AR) is going to be the next big trend. I’ve tried a couple of headsets, and while AR is impressive, the hardware components are just not there yet for it to take off. Once that does happen, AR has the potential to be the next mobile. It’s likely that AR will even catch on faster in productivity and education markets than in gaming applications due to the possibility of enhancing current reality with additional visual information. And it’s been proven that brain processes visual informations significantly faster than written text.

One speaker attending the show who will have great insight into AR is Jeri Ellsworth. She is an experienced hardware product developer that has brought not only the products and technology to market (Commodore 64, C-One, C64DTV, VIC-20, ZX81) but has been involved in the creation and growth of several successful businesses (CastAR, Valve). It will be interesting to hear how someone from the education space sees this technology take off in other categories, especially given the prominent role VR has taken in gaming.

Be sure to check out the presentations by Tim Sweeney and John Riccitiello, as they will likely be speaking about Windows 10 and its openness. Microsoft is always making smart bets, and it will be interesting to see if the company can manage to keep publishers happy.

With a booming market comes the money. I’ve heard several investors talk firsthand about their excitement with the VR market and it usually turns into a discussion about content. They want to invest in platforms and finding the right one to support is always the challenge in a rapidly growing market.

There are many investors and venture capitalists both onstage and in the crowd. The real question of GamesBeat Summit 2016 is what events are they attending and where are they hedging their bets?

Ondrej Homola is co-founder and CEO of Lifeliqe, a platform company for the creation, sharing and deployment of interactive 3D objects into mobile, virtual reality (VR), augmented reality (AR), and 3D printable media.