The tablet market has now been in decline for six quarters in a row. Q1 2016 saw a 14.7 percent year-over-year decline: 39.6 million units shipped worldwide compared to 46.4 million units that shipped the same quarter last year, according to market research firm IDC.

The numbers include both slate and detachable form factors, meaning tablets with keyboards are counted. Detachables experienced triple-digit year-over-year growth on shipments — 4.9 million units in total, an all-time high for Q1.

The top two tablet makers maintained their positions: Apple was first and Samsung second. IDC blamed the decline on “first quarter seasonality” and “an overall disinterested customer base.” The top five vendors accounted for 57.4 percent of the market, up from 53.1 percent last year: 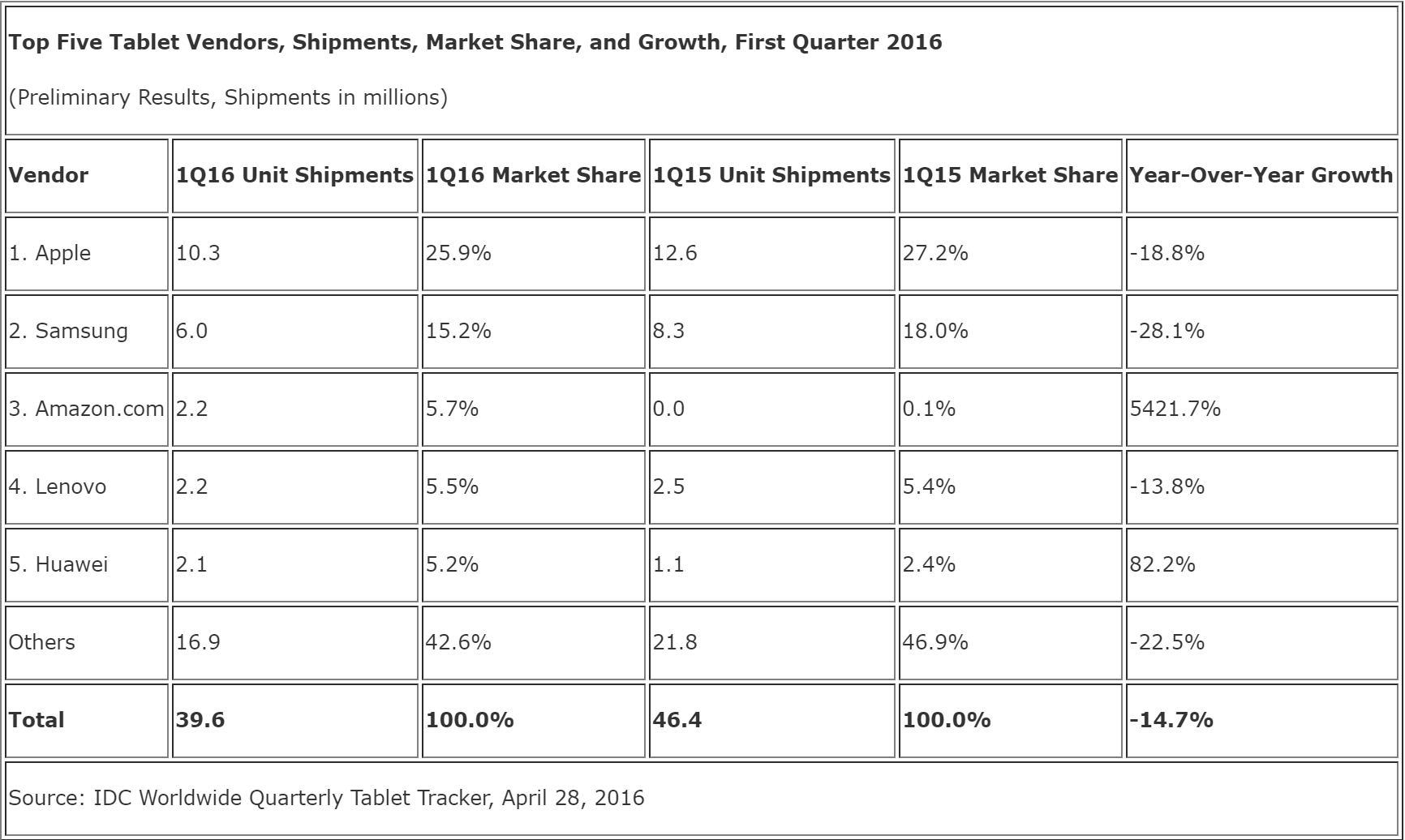 Both Apple and Samsung saw their respective numbers fall once again. Apple dropped 1.3 points to 25.9 percent market share, which means it still grabbed a quarter of all tablets this past quarter, despite shipping fewer units. Samsung slipped 2.8 points to 15.2 percent, and also shipped fewer units.

Because of the larger drop for Samsung, the gap between the South Korean company and the U.S. company increased (it had previously been shrinking). The slight reversal can likely be attributed to Apple’s iPad Pro lineup, though Apple is still selling fewer and fewer iPads overall.

Amazon’s year-over-year growth is surprising, as the company usually only places in the top 5 in Q4, which is the company’s most important quarter due to the holiday season. A jump from 0.1 percent to 2.2 percent tells the story of the company’s low-cost Fire tablet, which IDC notes “is certainly not the first of its kind” but which once again shows “Amazon’s prowess as a household brand and a distribution powerhouse.” It should be noted that 0.1 percent isn’t a fair starting point: IDC did not count Amazon’s 6-inch tablet in Q1 2015 because it did not meet the requirements, thereby exaggerating this quarter’s gains.

IDC also noted that Lenovo continues to suffer from slowing demand for Android slate tablets and the lack of detachable offerings. Huawei, meanwhile, is building momentum, thanks to its carrier relationships.

“Microsoft arguably created the market for detachable tablets with the launch of their Surface line of products,” IDC senior research analyst Jitesh Ubrani said in a statement. “With the PC industry in decline, the detachable market stands to benefit as consumers and enterprises seek to replace their aging PCs with detachables. Apple’s recent foray into this segment has garnered them an impressive lead in the short term, although continued long-term success may prove challenging as a higher entry price point staves off consumers and iOS has yet to prove its enterprise-readiness, leaving plenty of room for Microsoft and their hardware partners to reestablish themselves.”

In short, IDC believes Microsoft has a real chance to break into the top 5. So far, Surface sales have been strong, but not strong enough.