Consumers have purchased more than 40 million PlayStation 4 consoles, and that has helped Sony return to an annual profit for the first time in three years.

The Japanese corporation made an operating income of $1.36 billion (147.8 billion yen) through the 12-month period ending March 31, according to Sony’s latest financial report. That’s up from a loss of $1.16 billion year-over-year. The company’s “Games & Network Services” division, which includes PlayStation, was one of the biggest driving forces behind this growth. With all of this momentum for the PlayStation 4, many gamers wonder why Sony would risk destabilizing its leadership position in the market by releasing the oft-rumored PlayStation 4 Neo. But Sony’s hardware revenue numbers are on the decline, and its fiscal Q4 was the slowest three-month period ever for PS4 shipments to retailers. Those factors likely have Sony looking for a way to boost revenues for a successful product that is dominating the console segment of the $99.6 billion gaming industry through the release of Uncharted 4: A Thief’s End and beyond.

The rumored PlayStation 4 Neo could be an upgraded version of the console that features faster processors and memory. It would be a followup to a PS4 that is already in the hands of millions of consumers. Sony confirmed it has shipped 40 million PS4s to retailers, and that has helped PlayStation Network, the company’s online service and digital store, grow its annual profits by 84 percent year-over-year from $450 million to $820 million.

But Sony may believe it needs the Neo as a way to boost consumer interest in the device in the same way that it has in the past with revisions to all of its PlayStation-branded devices.

“Historically, Sony has not only managed to maintain sales of older consoles while newer editions exist, but it has also launched new editions of each device during the lifecycle,” VB Insight analyst Stewart Rogers told GamesBeat. “In the past that, has meant reducing the size and weight of each console or handheld, but in the future, it will likely need to improve processing power and graphical capability.”

On top of that history of revisions, Sony may also want the Neo because hardware revenues are down even as unit sales are climbing. The company shipped 17.7 million PS4s to retailers in fiscal 2015/2016. That’s up from 14.8 million in fiscal 2015, but hardware revenues for the PlayStation division still dropped 1.6 percent year-over-year from $6.79 billion (733.76 billion yen) down to $6.68 billion. 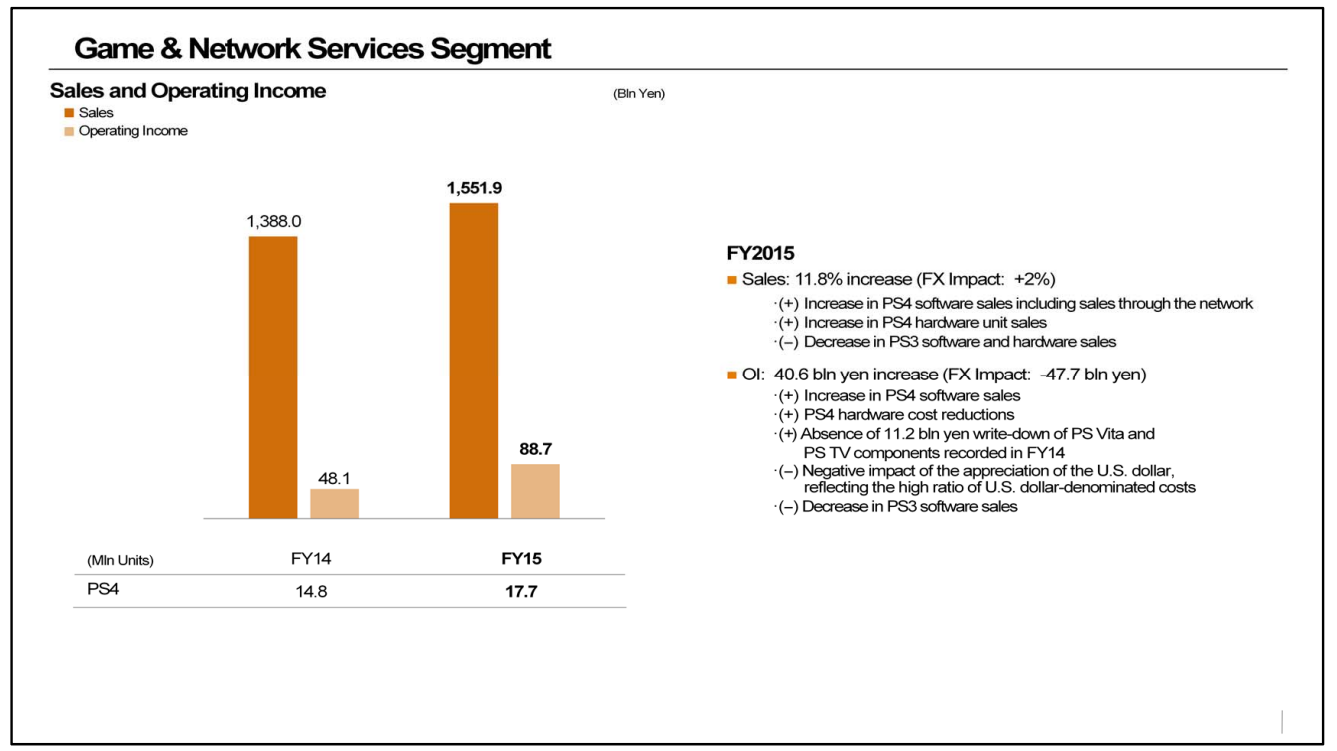 Above: Sony announced some big profits and revenues for its gaming division.

The fading PlayStation 3 gets some of the blame for that decline, but the price of a new PlayStation 4 is just as responsible, according to analyst Liam Callahan with industry tracking firm The NPD Group.

“Video game hardware dollar sales declined by 19 percent in March 2016, with unit sales dropping 17 percent,” Callahan said earlier this month about new hardware sold at U.S. retailers. “The difference in trends was due to some softening of average retail prices of 2 percent versus last March.”

Sony cut the price of the PlayStation 4 from $400 to $350, and you would expect that to stoke demand. But after shipping 8.4 million PS4s during the holiday quarter (the most Sony ever sold-in to retailers), the company followed that with 2.3 million last quarter. That’s down from 2.4 million in the same period from the previous year.

PS4 Neo could simultaneously enable Sony to raise the price of its console back to $400 while also giving the millions of people who already own the console a reason to buy a new one.

And Sony is confident that it will at least sell more units in fiscal 2016/2017.

“We expect strong momentum of the PS4 platform to continue,” Sony chief financial officer Kenchiro Yoshida said in a statement to investors. “Due to the impact of the earthquakes, there is a possibility that the supply of components from certain vendors might be affected, but even with that impact, at this point in time, we think that in [fiscal 2016/2017], we can exceed the 17.7 million units of PS4 hardware that we sold in the previous fiscal year.”

And if Neo can help the company increase the average sales price for every PS4 sold, Sony could have even better profits to report next April.