Ryan Holmes, founder of SpaceVR, said that his startup has raised $1.25 million to send a virtual reality camera into space as a satellite, orbiting the Earth and taking 3D imagery of the planet and outer space.

Holmes said that the satellite will be launched into space in early 2017 aboard a rocket from SpaceX, the space rocket company created by Elon Musk. The camera will be sent to the International Space Station, and then it will be launched via a Nanoracks launcher into an orbit at more than 17,000 miles per hour, Holmes said.

Holmes encouraged everybody to think about the stars, rather than fighting wars on the planet. Last year, SpaceVR tried to raise $500,000 on Kickstarter to get going, but the campaign failed. Today, at the Silicon Valley Virtual Reality Expo in San Jose, California, Holmes said that he has raised more money to make “the world’s first virtual reality camera satellite.”

Previously, SpaceVR was going to make a 12-camera rig capable of shooting 360-degree video. The company evaluated its feedback from the unsuccessful crowdfunding campaign and did a more modest Kickstarter with a goal of $100,000. That campaign was successful, with a focus on a camera with a four-lens, 2D effort.

But now the company is switching plans again to do the satellite camera. This new camera has two 4K sensors, each with a wide field of view. SpaceVR will stitch the video together as VR imagery.

The satellite will send videos back each week that show time-lapse scenes. 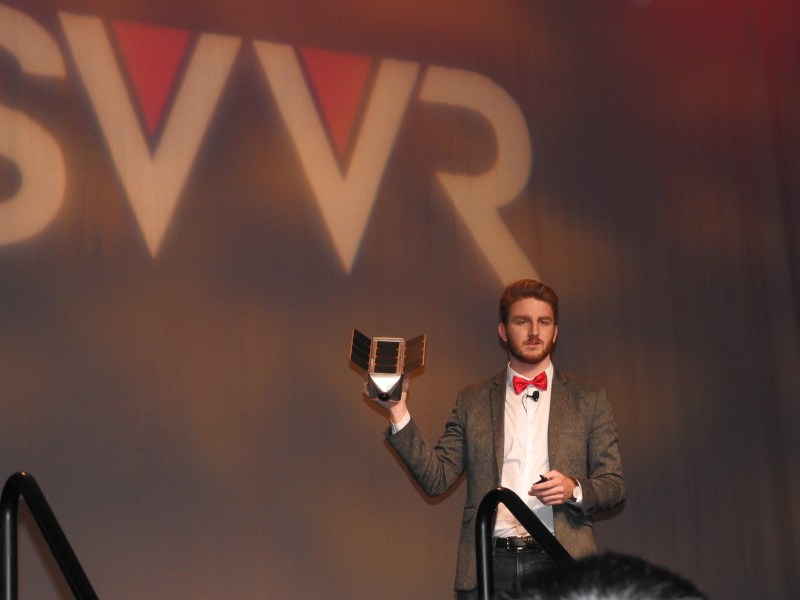