Call of Duty is going boldly into the final frontier. Video game publisher Activision announced today the newest installment in the modern combat shooter series: Call of Duty: Infinite Warfare. The game will take Call of Duty fans into space battles as humanity expands into the solar system in the future. But Activision is being careful in describing the game as a military shooter at heart, not a sci-fi game.

On top of that, Activision is launching a remastered version of Call of Duty 4: Modern Warfare, the Infinity Ward title that debuted back in 2007. That game will be included in the deluxe edition of Infinite Warfare when it debuts on Nov. 4. These announcements should go over well with the community of 40 million monthly active users excited about the next installments in the annual franchise, which has generated more than $15 billion over the past decade.

Infinity Ward will have had about three years to work on the game by the time it ships, as owner Activision now has three studios working on the game — including Sledgehammer Games (maker of Call of Duty: Advanced Warfare) and Treyarch (creator of last year’s Call of Duty: Black Ops III). The three studios have each created separate Call of Duty universes with their own storylines, and they alternate new releases.

Santa Monica, Calif.-based Activision Publishing, a division of blockbuster publisher Activision Blizzard, said Call of Duty is “returning to its roots for a classic, epic battle of two armies unlike anything seen before in the record-setting series.” Infinite Warfare will immerse “players in a war story that, for the first time in franchise history, extends beyond the reaches of Earth into the vast expanse of our solar system.” 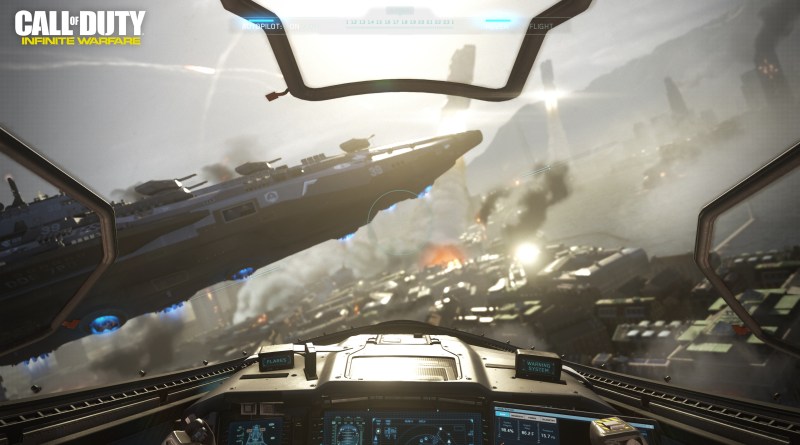 Above: Call of Duty: Infinite Warfare will let you pilot a space fighter.

“This year, we’re both honoring the heritage of Call of Duty while taking players to incredible new heights,” said Eric Hirshberg, CEO of Activision Publishing. “Call of Duty: Infinite Warfare is a bold, new vision from the studio that created the original Call of Duty and Modern Warfare, and an adventure on an insanely epic scale that only Call of Duty could deliver. And Call of Duty: Modern Warfare Remastered is one of the most beloved games of all-time, reborn for a new generation. We have lovingly remastered it with a whole new level of graphical fidelity and realism that wasn’t possible when the original was released. It’s going to be a great year for Call of Duty players.”

The Infinity Ward team will describe the game in a live broadcast at 10:30 am Pacific time today. In a feature dubbed “Warships,” Infinity Ward is introducing a new element to Call of Duty For the first time in the series, where air and space combat are a key aspect of the campaign. Players will experience new combat scenarios and environments that add variety to the single player campaign. A massive warship housing the player’s crew (called the Retribution) is a key character throughout the campaign and a vessel that players will come to rely on and be responsible for. Throughout the campaign, players will also pilot their very own advanced space combat ready jet-fighter, better known as the Jackal.

Above: Call of Duty: Infinite Warfare will have plenty of “boots on the ground.”

“With Call of Duty: Infinite Warfare, we are taking Call of Duty to places fans have never experienced in the series,” said Dave Stohl, studio head of Infinity Ward, in a statement. “On one hand, this game is the kind of gritty, boots on the ground, visceral war story that Call of Duty is known for. On the other, its future setting takes players on a journey of epic scale and proportions, providing incredible gameplay innovations and new experiences for our fans. This is a grand scale, old-school, all-out war in an epic new-school setting. And it’s going to be a hell of a lot of fun.”

Infinity Ward faces a big test with this game. Its last title, Call of Duty: Ghosts, debuted in 2013 to widespread critical negativity. I rated that game 80 out of 100, noting that it wasn’t as good as rival Battlefield 4, which came out at the same time. Ghosts earned an overall 78 out of 100 on game review aggregator Metacritic.

After that criticism, Infinity Ward rebooted. It hired a couple of narrative writers and game designers, Taylor Kurosaki, and Jacob Minkoff, from Sony’s Naughty Dog studio, the maker of the story-driven blockbusters The Last of Us and Uncharted. The revelations so far suggest that Infinity Ward has taken some lessons from Naughty Dog and put more emphasis on dramatic story elements.

Indeed, Activision said that Call of Duty: Infinite Warfare “puts storytelling front and center in a rich, immersive narrative.” The plot explores the “weight of leadership and its responsibilities.” Activision said, “In a desperate time of overwhelming adversity, the player, as Captain of their own warship, must take command against a relentless enemy. Experienced soldiers are thrust into extraordinary circumstances that will test their training and reveal their true character as they learn to lead and to make the hard decisions necessary to achieve victory. The game also introduces stunning, never before seen environments, new weaponry, and inventive player abilities to Call of Duty.” 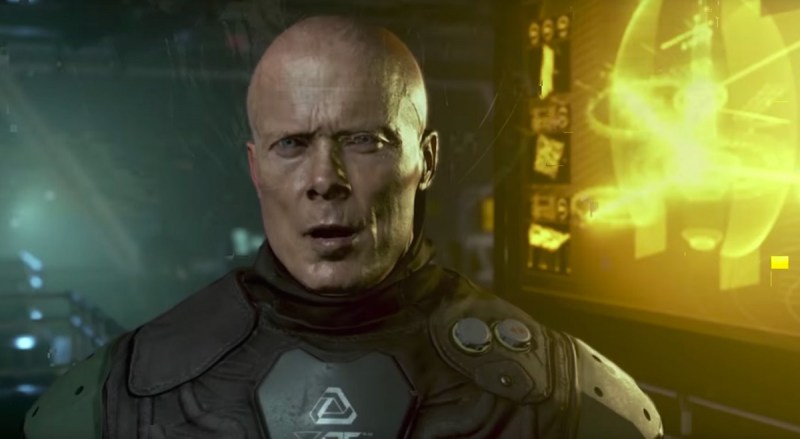 Above: The leader of the Settlement Defense Front in Call of Duty: Infinite Warfare.

The campaign ranges from boots-on-the-ground combat to piloting high-speed space-fighters, and it occurs as a near seamless experience with few visible loading times, Activision said. And the team promises the “hallmark blockbuster franchise moments that fans love.”

The game’s Multiplayer mode features an evolution of Call of Duty’s movement system with an emphasis on “front-line engagement.” Additionally, Infinite Warfare will introduce an original cooperative Zombies mode that takes players on a wild ride through a new storyline with unique gameplay features and mechanics. Typically, the Zombies co-op mode is something that only the Treyarch studio includes in games, but the inclusion of Zombies in this new game shows how hard Activision is trying to keep the franchise popular and growing.

More details about multiplayer and the new zombies experience will be announced at a later date.

The Call of Duty: Modern Warfare Remastered is being executive produced by Infinity Ward and developed by Raven Software (which means that Activision is enlisting the resources of a fourth studio to handle the franchise). The game will have improved texture resolution and detail, high-dynamic range lighting, lit and shadowing VFX particles, and revamped animation and audio. The game will also have a more modern online multiplayer mode with killstreaks, XP, Prestige and more. The 10 maps include “Crash,” “Backlot,” and “Crossfire.” 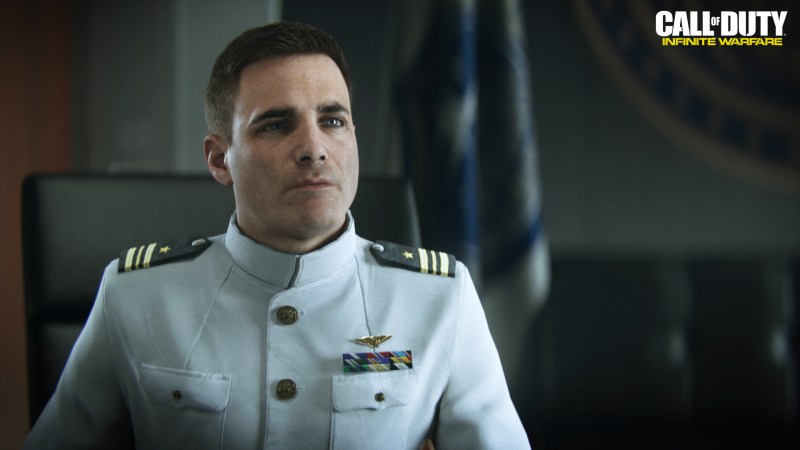 “The original Modern Warfare raised the bar on video games and will forever be remembered as one of the best. It’s an honor to be developing the remaster and we are committed to faithfully remastering this classic for Call of Duty fans,” stated Brian Raffel, studio head of Raven Software, in a statement. 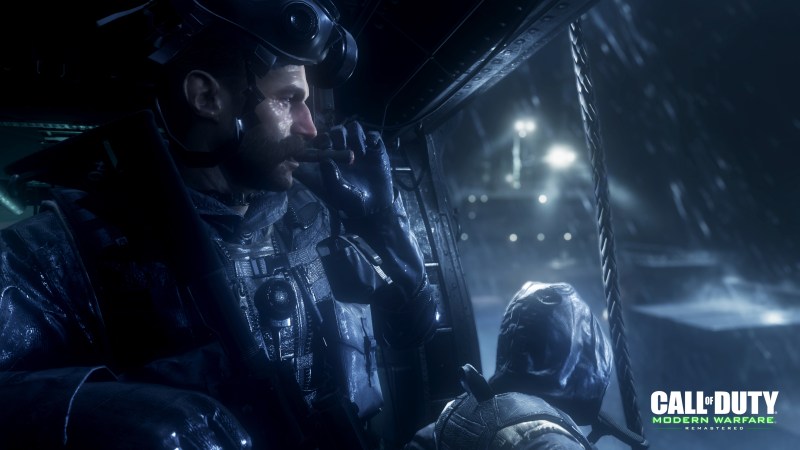 Above: Call of Duty: Modern Warfare Remastered brings back familiar heroes like Soap.

In the single-player campaign, Call of Duty: Infinite Warfare will lead players through a journey as they engage in heroic battles with hallmark boots-on-the-ground combat. Activision said, “The campaign spans our solar system, taking players on a journey from Earth to beyond our atmosphere. It’s grand scale war with unforgettable characters, rich emotional arcs, an epic new setting and blockbuster Call of Duty action.”

The game puts players in the role of Captain Reyes, a Tier 1 Special Operations pilot, who takes the helm of the Retribution, one of Earth’s last remaining warships. The Retribution has to take on a fanatical enemy, the Settlement Defense Front (The Front), which represents a splinter group of insurgents that broke away from the United Nations Space Alliance during a war of secession, years ago.

In the world of Call of Duty: Infinite Warfare, Activision said, “Our planet has been stripped of its natural assets through population growth and industrial expansion. The people of Earth now rely upon colonies throughout the solar system to mine planets and asteroids for necessary fuel and other resources. The Front is a fascist power, comprised of brutal and militant radicals, toughened by the extreme conditions of off-world environments. They seek to control those outposts and their wealth, putting a stranglehold on the countries of Earth. After years of uneasy stalemate, diplomatic relations are strained and it will take only the slightest nudge to tip the entire solar system into war.” 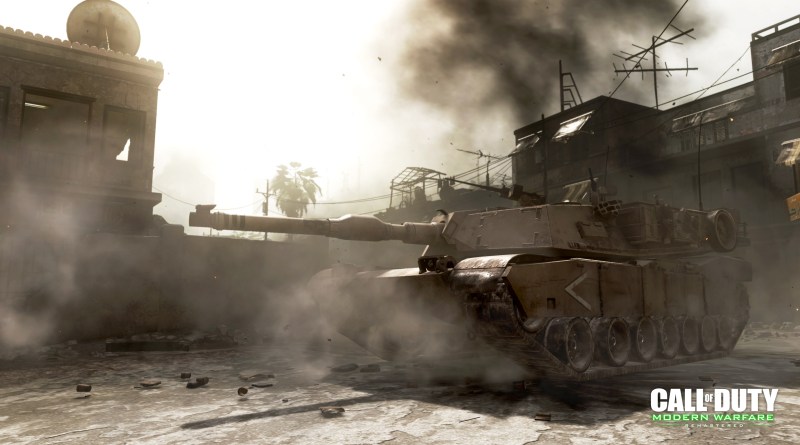