Ailing mobile giant BlackBerry has announced that it’s pushing the video-call feature in its BBM messaging app cross-platform, which will bring the app in line with other messaging apps in the space.

Though it was quietly unveiled as a beta feature on Android last week, BlackBerry has now announced that it’s available on iOS, too. It will be limited to those in the U.S. and Canada until July, after which video calling will shed its beta tag and be made available globally. 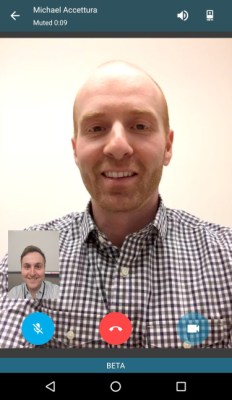 Once a major force in the mobile phone realm, BlackBerry has struggled in the hardware market for some time and has recently embraced Android — it launched its first Android phone and plans to launch others this year. But BBM was opened up beyond its own mobile OS back in 2013, as it looked to capitalize on what was one of its most popular services. So far, video calling has been limited to BBM on BlackBerry 10.

This is the latest in a line of moves by BlackBerry to increase the “stickiness” of BBM. The company has also recently ditched its $1 privacy and control subscription to make all features completely free. But video calling feels like it’s perhaps coming a little late in the day — Skype has offered video calls on mobile for a while already and has recently expanded this offering to include group video calls. Facebook Messenger has also offered free video calls for some time, while younger messaging upstarts such as Janus Friis-backed Wire also offer it.

But for those who still use BBM and have friends on Android and iOS, it will no doubt be a welcome addition to BlackBerry’s messaging mix. According to a recent Pew study, 47 percent of U.S. smartphone owners made video calls from their devices in 2015, up from 33 percent in 2013.