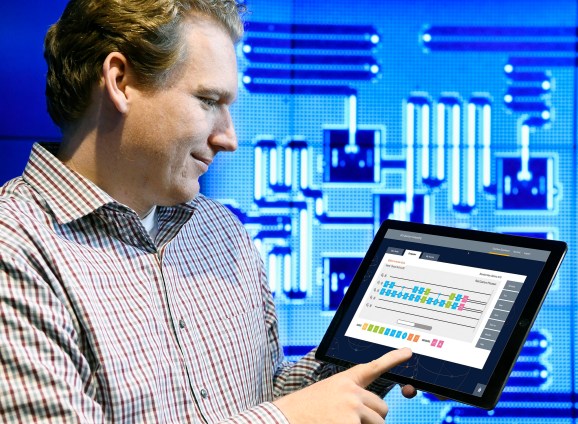 The IBM Quantum Experience on a tablet.

IBM today is opening up access to a five-qubit quantum computing processor located at its T.J. Watson Research Center in New York and made available through a new free cloud service.

IBM’s move to offer the service is fascinating because it allows ordinary people to try out infrastructure that has traditionally been restricted to highly protected research labs. It’s one thing for a company that rents out its computing infrastructure — such as IBM, but also Amazon, Google, or Microsoft — to expose a new service, and that has happened to graphics processing units (GPUs), but quantum computers are vastly more expensive and uncommon. Put another way, they’re research infrastructure.

And that points to IBM’s motivations here. While researchers develop more powerful quantum computers, IBM wants to figure out which applications and algorithms will be relevant and useful to businesses, using what’s available now. “We want to basically get the community thinking there,” Jerry Chow, manager of IBM’s experimental quantum computing group, told VentureBeat in an interview.

Big Blue has been working on quantum computing for 35 years, Chow said. In fact, he said, the field of quantum information science was founded at IBM Research — specifically by IBM Fellow Charles Bennett. One of IBM’s quantum chips can withstand more than 100 microseconds of coherence, Chow said, adding, “That’s something that’s unheard of anywhere else in the community.”

Google has a quantum artificial intelligence laboratory, and it partnered with the NASA Ames Research Center to buy and operate a quantum machine from D-Wave. Microsoft has its own quantum research group. But IBM has beaten those companies to the punch in terms of letting mere civilians mess around with its quantum hardware.

IBMers have devised a point-and-click user interface for beginners and experts alike. User input — about what the qubits should do — ultimately gets turned into quantum assembly language that can be run on the chip. But it’s not as if IBM has a quantum computer farm; it has a very limited set of resources to work with. You can’t have 1,000 people running tests on one quantum chip. So IBM designed a scheduling system — that way, tests run sequentially. After a job is performed, the service sends out the results of the experiment in an email.

Depending on how the new service is received, IBM may make more quantum infrastructure available for people to tinker with.

“We want to start, and we want to see how the community reacts to this,” Chow said.

You can try out IBM’s “Quantum Experience” service by going here.