Long before Spotify, YouTube, Apple Music, and Tidal, there was Last.fm. This U.K.-based music-streaming service recommended new music by tracking users listening habits to build a profile of users’ tastes. While the London-based company is now a shadow of its former self, two of the company’s original founders have been building something quite different over the past few years, and today they’re officially unveiling it to the world.

Five years after selling Last.fm to CBS for $280 million back in 2007, Felix Miller and Martin Stiksel founded Lumi (not to be confused with WowWee’s toy drone or the online branded-goods supplier), a web-based content-recommendation app that finds news and stories for you to read based on your browsing history. Now, however, the Lumi folks refer to Lumi v 1.0 as the “prototype” on which they are basing their new product, which officially arrives today.

Soft-launched on Android in May 2015, the beta version of Lumi has garnered around 100,000 users so far. As they did with the browser-based version, Miller and Stiksel have used the launch as a way to “learn and refine the product before the formal launch,” they told VentureBeat.

The web version of Lumi will be gradually phased out, meaning that Lumi will be a mobile-only affair, bolstered by its arrival for the first time on iOS today. That the service will only be available on mobile phones is very much indicative of where we’re at today — just last month, Facebook revealed that more than half of its 1.65 billion users only ever access the social network on mobile, and we’re seeing an increasing number of startups adopt a mobile-only approach. Moving forward, Lumi’s website will merely serve as a landing page for its duo of mobile apps.

So, what, exactly, is Lumi in its new guise? The core raison d’être of the app is still curating the news, but this time it requests that you connect your Twitter and Facebook accounts, and it also taps into other data, such as location and general in-app behavior. Lumi serves up content from popular newspapers and blogs on an article-by-article basis — like a physical newspaper or magazine. And with at least one eye on the Tinder generation, Lumi also features a “swipe left” and “swipe right” option on articles so users can provide feedback on the type of content they like, which will improve Lumi’s machine-learning smarts over time. 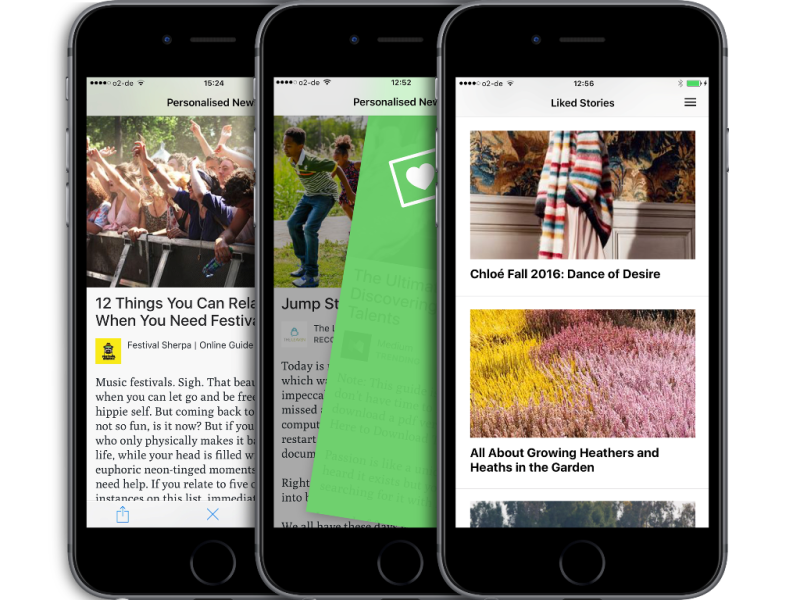 Above: Lumi for iOS

That Lumi wants its users to connect their Twitter and Facebook accounts to maximize the personalization of the app is a red flag for me, and likely for many others — not everyone is happy to connect their personal social networks to third-party services. And this is why Lumi will still work without connecting these social networks, but the content will be less tailored as a result. Stories will still be presented based on location and on what’s trending among other key “influencers” and Lumi users. Also, users can improve things over time by swiping left / right on the articles to teach Lumi about their interests.

While Lumi’s founders have a track record building a successful digital business, the general idea behind the company feels somewhat familiar. I can think of about a dozen apps that have tried to do something similar in terms of reinventing news-discovery for the digital age, from Flipboard through to Facebook’s very own Paper app, and on to Apple’s News and young upstarts such as Circa (now closed). So how will Lumi be any different? According to Miller and Stiksel, Lumi is powered entirely by machine-learning, using signals from social networks, location, and swipes, rather than requiring users to manually check boxes, choose topics, or follow other users.

“Lumi is a mobile news curation app that presents stories based on the decisions you’ve already made,” explained Miller. “Traditional news apps present stories based on what appeals most to their existing readers, not what appeals to your actual interests. Lumi breaks this cycle and presents stories tailored to the user. By looking at your Facebook and Twitter data, Lumi will find stories that interest you from the moment you first open the app. As you read and swipe right on the articles you like, Lumi refines the experience even more. Lumi learns from your every interaction, so all you have to do is read.”

Much of that will, of course, depend on your willingness to connect your Facebook and Twitter accounts, as noted already.

Though Lumi took on some angel investments back in 2014, the venture is largely self-funded — remember, Last.fm was sold for a whopping (at the time) $280 million back in 2007. But this still leaves one lingering question — how will Lumi make money? While nothing is set in stone yet, some options are being considered.

“Services like Lumi have always been monetized in one of two ways: ad-supported or subscription-based,” Stiksel told VentureBeat. “We will go with the model that is appropriate for our user experience. Lumi is helping publishers get their content discovered; we are driving more readers to content that is currently underexposed.”

In short, watch this space.