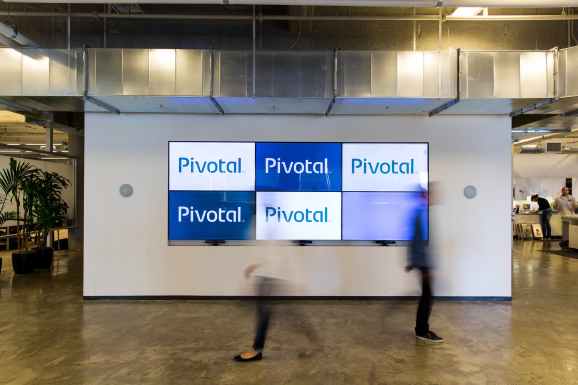 Pivotal, a company that spun out of EMC and VMware in 2012 to sell cloud computing and big data software, is announcing today a $253 million funding round. The company raised the round at a post-money valuation of $2.8 billion, said a source familiar with the matter.

The new round includes fairly significant investors. Auto maker Ford Motor Co., which has been engaged in a three-year collaboration with Pivotal, led the round. And Microsoft, which competes with VMware in the server virtualization business, is also coming on board as a new investor.

Among other things, Pivotal pushes the Cloud Foundry open-source platform-as-a-service (PaaS) cloud software, which can run applications on public cloud infrastructure or companies’ on-premises data centers. Cloud Foundry can work atop Microsoft’s Azure public cloud, but a deeper collaboration may well be possible.

“As applications and workloads move from on-premise to the public cloud, our investment in Pivotal reinforces the increasing demand for a deeper partnership between Pivotal Cloud Foundry and Microsoft Azure to service the world’s largest enterprises and their developers,” Scott Guthrie, executive vice president of Microsoft’s cloud and enterprise division, is quoted as saying in a statement on the Pivotal funding news.

And yet, Microsoft has its own competing PaaS services, as do Red Hat, Apprenda, and other vendors.

San Francisco-based Pivotal has more than 2,000 employees. In the first quarter of 2016, Pivotal generated $83 million in revenue, up 56 percent year over year, the company said in the statement. Customers include BMW, Humana, Lockheed Martin, Philips, and Verizon.

This year, Pivotal has announced acquisitions of CloudCredo, Neo, and Slice of Lime. Last year, Pivotal moved to open source much of its big data tooling.

Microsoft and VMware veteran Paul Maritz stepped down as Pivotal’s CEO last year and was replaced by Rob Mee.