Recent announcements from Facebook, Microsoft, Kik, Telegram and others have sparked a chatbot craze, a gold rush to create tools for businesses to chat directly to consumers. All these new chatbots in turn drove dozens of startups to attempt to build an uber bot — one bot to rule them all.

But so far, most of the recently released bots are pretty weak.

Sensay, a new chatbot service, is not the uber bot. But its chatbot, which lets users get help from vetted strangers for any task, has hit 1 million users on just its main SMS-based service alone, and the number is accelerating, according to cofounder and chief operating officer Crystal Rose.

It’s one of the few bot companies I’ve met with that says it is getting significant traction. 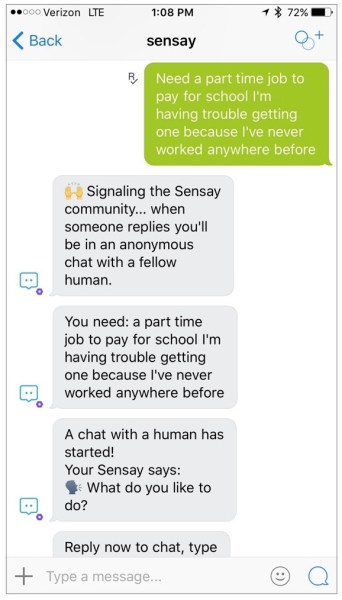 Here’s how it works. You register on SMS or Slack (or as of today, also Kik), and Sensay asks a few questions about you, your areas of expertise, and the types of topics or tasks you’d like to help on. It then invites you to type in exactly what you need. (So while there is this vetting, it’s pretty lightweight, to avoid too much friction in the process.)

Let’s say you type in that you’re looking to hire a creative designer to create a logo. Sensay recognizes your request and then submits it to the Sensay members in its database who are creative designers or who might be able to help you find such a person. If that person opts to chat with you, the connection is made.

The average time for a connection is under 90 seconds, according to the company.

In short, it wants to be the first place you can go from any chat platform, where you can ask any question and be routed to the right person — an actual human — to help you get the answer.

The Venice Beach, California company says it has seen a steady pickup in the number of people messaging its platform, with that number doubling every month since Sensay launched its public beta in September. But other metrics also show traction: The frequency with which users are messaging is growing, and the time between messages is shortening, Rose said. 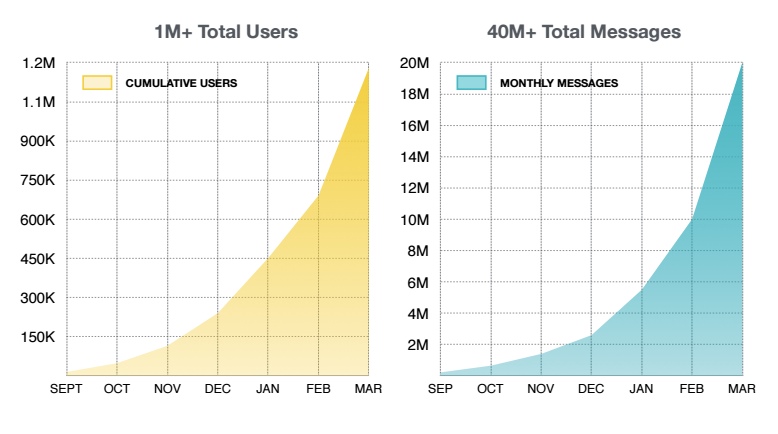 If there’s any magic to its recipe, it’s the company’s early tapping into a community of L.A.-based technology startup founders who are looking to help each other out. The innovation here is that Sensay isn’t the all-controlling middleman. It opens up the chat interface to a community, where messaging happens peer-to-peer.

The secret sauce is ‘peer-to-peer’

After a conversation happens, Sensay asks both parties to rate the other person. Like Uber’s rating of riders and drivers, Sensay’s rating helps create accountability. No one wants to help someone else who has a poor rating. And there’s no incentive for bullying, because people don’t want their scores to drop.

In one testimonial, app developer Sri Pulakanam told Sensay that he gets regular gigs through Sensay. One time, he answered a few questions from a user, exchanged contact information, and landed a 6-month $35,0000 development project for his tech agency, Neurlabs, where he is head of technology. Sensay says it plans to publish his testimonial in a blog post next week. 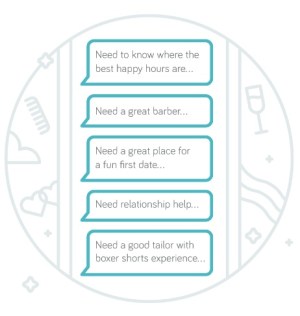 If this service catches on, it’s because Sensay started with enough people to always be around to answer questions, to make sure users aren’t disappointed by not getting an answer. It’s the chicken and egg problem most networks face.

Indeed, the company says it has a threshold it calls “sub-Sensay,” a level below which it feels it doesn’t have enough users to help with a specific question. When that happens — about 8 percent of the time, according to the company — Sensay counsels the user to try again at another time or reword their need.

The trick for Sensay is to figure out how to expand from its base.

About half of all messages result in a “commerce-able” item in them, as Rose puts it. These include things like coupon codes or affiliate links. For example, some users check in to Sensay to see if they can get promo codes for things like Lyft (looking for first-time users who have a 20 percent off code to offer them), or discounts or offers for a trip to Las Vegas.

I made a couple of requests on Sensay’s Slack bot, to get help for producing tech events for VentureBeat, and got an answer right away from someone who was clearly plugged in and provided some good leads. As the founder of a publication active in covering technology, however, my interests are closely aligned with the Sensay’s community.

Interestingly, about 25 percent of users exchange personally identifiable information (email addresses, phone numbers, etc.) so that others can contact them, according to Rose. Indeed, without thinking about it much, I offered my contact details to the person I chatted with, because he or she was so knowledgeable. I asked for their name and details, but they didn’t respond — saying they had to rush into a board meeting.

This isn’t unusual. Sensay says it has built in an ability for both users to remain anonymous, if they want.

The company raised $1.5 million a year ago from Greycroft Partners, Draper Associates, Amplify.LA, Quest Venture Partners, and others. The company is about to finish raising its next round, which includes the existing investors, Rose said.

Right now, the company says it isn’t focused on monetizing its service. It wants to build an audience by making sure it can connect people, even if those people then take their business offline, cutting Sensay out of the deals. The company will figure out later how to build in ways to charge people for the value the site provides, Rose said. It will begin testing ways to monetize for discrete services soon, Rose said. For now, the site offers you 10 “coins” (no value, just symbolic) after you get help, and asks you how many of those virtual coins you’d like to give to your Sensay.