As a masters student exploring artificial intelligence at Stanford University almost 30 years ago, Reed Hastings no doubt had an eye on where the future might take him.

But of all the scenarios he imagined for his career, it’s highly unlikely that any of them included the one that unfolded this past week: strolling the red carpet in the south of France, rubbing shoulders with some of the country’s most glamorous actors and actresses, and fielding questions about his role as a global media kingpin.

It’s a future the CEO of Netflix says he couldn’t even have predicted five years ago, when the company was still primarily shipping DVDs to customers in the U.S. while grappling with its emerging video streaming service. Even now, the Internet continues to scramble the game so fast that Hastings said his company is racing to keep up with all the changes.

When asked, he didn’t even want to hazard a guess as to where Netflix might be five years from now.

“We don’t really know,” Hastings said. “It’s not Netflix that’s making the changes. It’s the Internet. We’re figuring out every year how to use the Internet to make a great consumer experience. Every year is an experiment.”

Hastings and Netflix chief content officer Ted Sarandos spoke with VentureBeat over lunch in Marseille, where they arrived this week to host a premiere gala for the company’s first original French-language series. The show, “Marseille,” made its global debut on May 5th, when the first season was made available around the world on Netflix.

The show is part of Netflix’s massive bet on original content, a strategy that it believes is one of the keys to its future. And as with most of the company’s emerging strategies over the years, this one has investors alternating between praising Netflix and fearing that it’s doomed.

But at that particular moment, sitting in a seventh-floor restaurant that offered an impressive panorama of Marseille’s Old Port as a backdrop, it was hard to believe that Netflix faced any serious threats. Rather, the setting seemed to convey the global influence Netflix now wields, an impact that has taken it far, far beyond its Silicon Valley roots.

Hastings and Sarandos plan to take it even further. Earlier this year, the company expanded by 130 countries, bringing its total to 190. While 47 million of its 81 million subscribers are in the U.S., Netflix wants to reach the same level of adoption internationally.

“We’d like to be as popular in the world as in the U.S., to be in one-third of households seven years from now,” Hastings said. 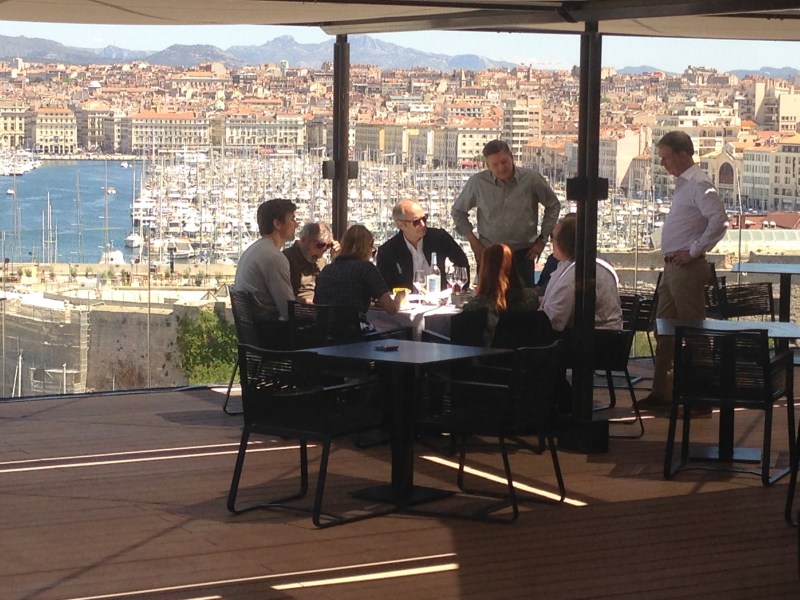 Above: Netflix’s Ted Sarandos (standing, center) and Reed Hastings (standing, right), talk to the cast and producers of “Marseille” with the city’s Old Port in the background.

As video streaming experiences a rush of entrants with deep pockets — such as Amazon Prime or Hulu, or even HBO’s standalone service — it’s easy to lose site of the fact that Netflix is in a unique position. None of these rivals match its one-two punch of being an Internet-based broadcaster that operates around the world.

Even HBO, which has had huge success with original content and which is most often cited as a direct competitor, is available in far fewer countries outside the U.S. and remains deeply tied to cable subscriptions for revenue.

“It’s hard to know who are our main competitors,” Hastings said. “Amazon and Hulu are still much smaller. When we ask consumers what they would watch if they didn’t watch Netflix, consumers tell us their second alternative is cable.”

At the same time, Hastings noted that many of these competitors are still growing. And even cable subscriptions remain relatively stable, he said. In general, people seemed to be eager to consume more quality content.

“It’s a race, but there are going to be many winners,” he said. “If you can build an iPhone app, you can start a TV channel. We are going to have to see how that plays out.”

While this executive team may not be able to predict their future, they do have a strategy in place to move the company toward fulfilling its ambitions. That game plan rests on three pillars: marketing, technology, and original content. 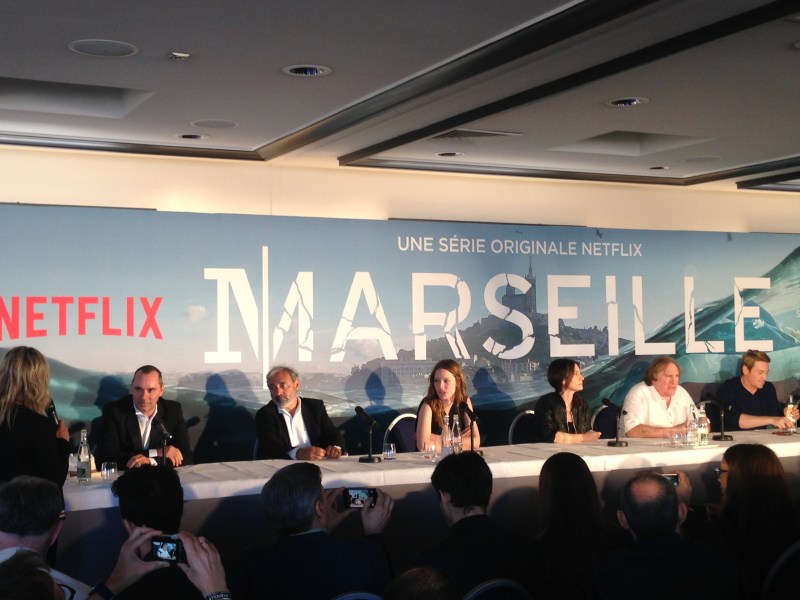 Above: The cast and producers of “Marseille” meet the French media.

Marketing is perhaps the most straightforward of the three. The challenge is to build awareness of the Netflix brand in the corners of the globe where it has just arrived. They’re doing that through advertising and partnerships and trial offers.

The technology gets more interesting. Hastings said the company is making big investments in things like machine learning to improve the personalization of the Netflix interface and experience. And these days, the company is constantly running A/B tests to see which tweaks persuade people to watch more content, he said.

In these cases, the company will select about 1,000 users and give half one setting and half the other setting for something. Eventually, the setting will default to the version seen by the group that consumes more.

Netflix ran a larger version of this test when it released “Sword of Destiny,” its self-funded sequel to “Crouching Tiger, Hidden Dragon.” For half the viewers, the film defaulted to the original version in Mandarin with their local language subtitles; the other half got the dubbed version as the default.

Of course, either group could change the settings, but Netflix wanted to see how the default impacted viewing. Sarandos said that, to his surprise, the dubbed group was much more likely to watch, and so that became the default.

That’s just one example of how Netflix continues to refine its algorithms. Sarandos said the goal continues to be to help people discover new content and to personalize recommendations based on viewing history, about the only data Netflix collects on users. The company has to let the algorithm select what it believes are the best shows for customers, rather than just continuing to highlight its own slate of shows.

A user might see a new show highlighted when it’s first released, but if it’s not a strong fit for them, the algorithm will push it away.

“We have to have the discipline to make it very targeted,” Sarandos said.

That’s a tricky balance, particularly as Netflix continues to ramp up its investment in pillar number three: original content.

With all that has happened in the last few years, it’s easy to forget that Netflix only released its first original show, “House of Cards,” in 2013. Hastings said back in 2005, Sarandos went to Sundance and bought a handful of movies exclusively for its DVD service. It was a disaster, and the project was quickly shut down — a brief misguided adventure that both men can now well afford to laugh at.

But the idea never completely went away. Sarandos came back to Hastings in 2011 and asked him for a $100 million budget to start developing original content. With more companies entering the streaming video field, and content acquisition costs continuing to rise, it seemed Netflix could be destined to fight a never-ending series of bidding wars to acquire the shows and movies it wanted.

Making and owning its own shows, on the other hand, could give it an advantage that would be harder to match. Also, it would allow the company to offer a single viewing experience around the world, rather than having to worry about content and rights restrictions on a country-by-country basis.

Still, it was a giant risk.

“It seemed crazy,” Hastings said. “At that point, we were still buying DVDs.”

In short order, however, Sarandos won the bidding for a new show by acclaimed director David Fincher: “House of Cards.” And things were off and running.

“It was pretty important to plant that flag in the ground,” Sarandos said. “Once David Fincher decides to work with you, it’s harder for others to dismiss the idea.”

This year, the company will spend $6 billion on developing original content (one of the numbers that makes investors hopeful and nervous all at once). More impressive, however, is the scope. Other services, like Amazon, have been funding original content, of course. And HBO continues to thrive.

But currently, Netflix has 30 shows or films in some stage of production. Sarandos believes that makes them as big as any broadcaster in the world. But unlike many traditional broadcasters, Netflix productions are underway in just about every part of the globe, and in multiple languages.

At the moment, Angelina Jolie is filming a movie for Netflix in Cambodia. Netflix also paid $60 million for a military satire by her husband, Brad Pitt. Director Bong Joon Ho (“Snowpiercer”) is filming “OKJA” in South Korea. And the company just announced plans for a Brazilian show.

Sarandos said earlier this year that Netflix will release 600 hours of original programming in 2016, about double the amount from last year. And that number will continue to grow rapidly. The company is focused on developing series in as many local languages as possible to find content that attracts users everywhere.

At the same time, Netflix wants those stories to have global appeal. It’s Columbia-based “Narcos,” for instance, is funded by a French company and is hugely popular in Germany, Sarandos said. The company has found that great stories can have global appeal, no matter the language.

“The great thing is, if you can expand the audience from the country of origin, you can produce at a larger scale and make better programs,” Sarandos said. “Being able to find American lovers of ‘Marseille’ in the U.S. enables us to spend more in France making ‘Marseille’.” 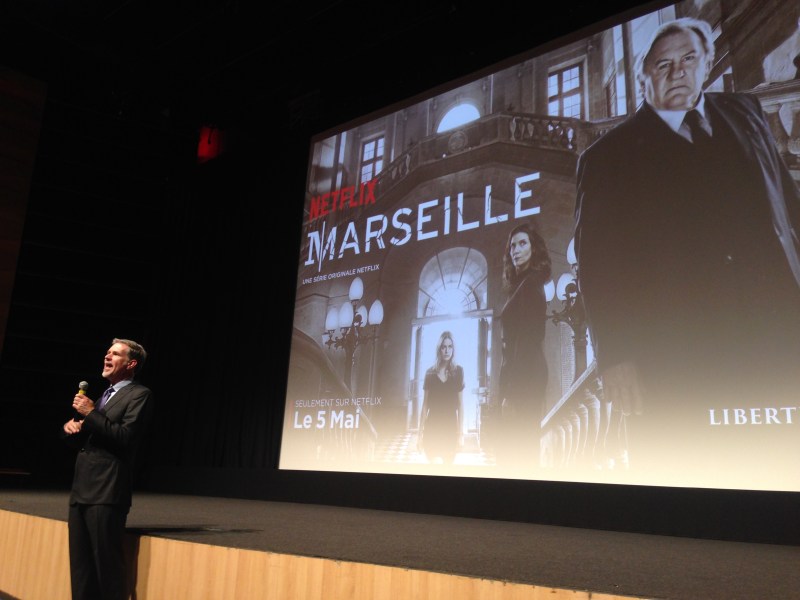 Above: Netflix CEO Reed Hastings speaks just before the premiere of “Marseille.”

The company hasn’t confirmed a price tag for “Marseille.” But it stars Gérard Depardieu, one of France’s most acclaimed actors. And Sarandos noted that the production hired hundreds of people locally and is generating local taxes. They also hope that the show will introduce Marseille to prospective tourists around the world who might know very little about France’s second largest city.

“Let me address the question you’re all asking,” said Sarandos at a press conference with the cast. “Why not Paris? That’s what everyone else would do. We are looking forward to introducing the world to this beautiful city.”

Netflix is also hoping to persuade skeptics in France that it can be a positive force for the country’s film and TV industry. When the service launched here in 2014, there was much controversy over whether this Silicon Valley company would undercut the country’s system for funding new films and shows.

Hastings likes to emphasize that “Marseille” was conceived, written, and produced entirely by French people. And to give it an even higher profile, the company struck a deal with TF1, one of the country’s largest TV stations, to broadcast the first two episodes next week.

“It’s another experiment,” Hastings said. “There are no rules on the Internet. TF1 has a big audience. We hope this will help them sell some ads and help us get bigger audience for ‘Marseille’. ”

Beyond the business case, though, they are hoping “Marseille” and other locally produced shows will demonstrate the company’s reach. It’s a powerful pitch that Netflix can make to producers around the world: the chance to launch a show simultaneously in 190 countries to 81 million viewers.

“The Internet is the first global distribution channel,” Hastings said. “It allows a company like Netflix to produce shows locally and distribute them around the world. With a show like ‘Marseille’, I think that will change some people’s minds about what Internet companies can do. It’s not just exporting Hollywood. When I see the Internet, it’s about about being able to share more content around the world.” 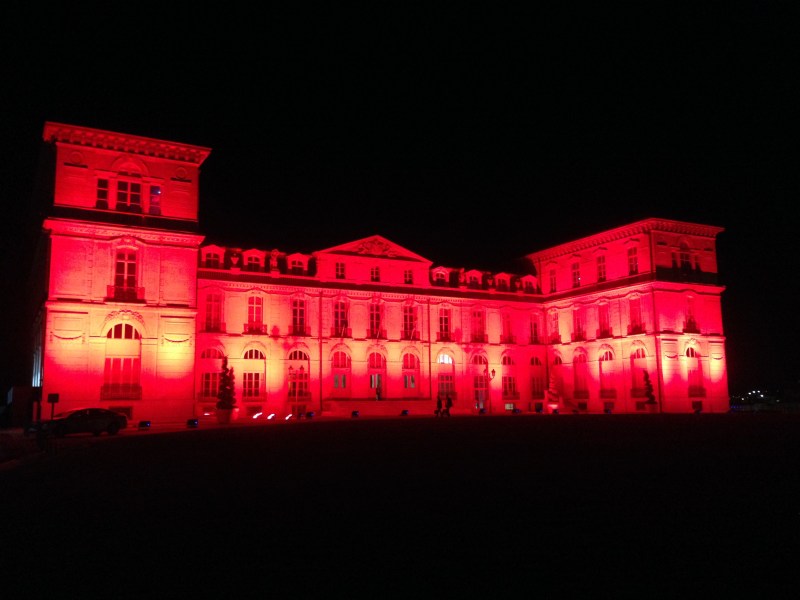 Above: The Palais du Pharo, where Netflix held its premiere screening of “Marseille.”