As someone who has been a part of the esports world in some fashion or another for a nearly a decade, the transition into working in the industry has been fascinating. Over the past several years, I’ve moved through volunteer opportunities, freelance contributions, team organizations, and contract roles, each with their unique sources of excitement and challenge. The absolute best of experiences to date, though, was being asked to work on the official commentary team for the Hearthstone Championship Tour (HCT) at the Americas Winter Preliminary.

When GamesBeat approached me to offer my thoughts on the process, I couldn’t say no. People have asked me all sorts of questions: How did you get the gig? When did you find out? What was the experience like? What did you learn? Will you be casting again in the future?

So, let me walk you through it.

How did you get the gig?

Who ends up as a commentator for esports? Most of the people involved from the production side are people with experience in specific areas related to the overall broadcast and who also happen to be lovers of the games. You certainly don’t run into people who aren’t interested in — and very good at — gaming, and they all have a specialized background of some sort.

I ended up being selected as an amateur caster through Blizzard’s So You Think You Can Cast (SYTYCC) process (the results are here). I was later told was that this initiative was designed to find people who could contribute as hosts and commentators, but who would be focused on that role — instead of grabbing pro players who are not playing in a given event.

I have no formal broadcasting experience, but I did a ton of competitive public speaking and debating growing up, and was preeeetty good at it. Those skills helped me as a content producer in all sorts of esports-related projects, including the Hearthstone podcast I co-host, Well Met. When Blizzard announced SYTYCC, lots of friends and fans of the show reached out and told me I should go for it — which I did.

(For the record, I assumed I would never hear back from Blizzard. I posted the video and promptly forgot about it.)

When did you find out?

This is a funny story. I know Hearthstone community manager Robert Wing from his time before joining Blizzard, as he and I briefly worked on Well Met’s predecessing podcast, the HearthPro Show, at BlizzPro together. Shortly after I joined BlizzPro, Rob was on his way out the door to his exciting new role at Blizzard, but we still chatted online from time to time.

In mid-January, about a week before the results of SYTYCC were announced, Rob DM’d me on Twitter to ask if I had time to chat with him on Skype to “talk casting.” I was in the deli at the grocery store buying lunch, and I think I dropped whatever I was holding (that wasn’t my phone!) on the ground. I raced home, took the call, and learned that I would be heading to Los Angeles in February as part of the new HCT broadcast talent pool.

We were asked not to say anything in advance of the official announcement, and let me tell you – sitting on that and not talking about it with anyone was torture. That was the longest week of my life in so, so many ways.

This is the interesting part for most people, no doubt. After some conversations in advance of the actual event to sort out travel, etc., I caught my (painfully early) flight to L.A. to go be an official Hearthstone caster.

I arrived in L.A. on the Tuesday preceding the broadcast. With the actual tournament days being Friday and Saturday, the plan was for us to have Thursday to go into the studio for some practice and to get familiar with the set, equipment, etc., and to spend Wednesday at Blizzard with the esports and Hearthstone teams to get some information about their goals for the year.

After spending Tuesday catching up with some area friends in Irvine (folks I know from years gone by in other Blizzard games and esports!), we (the amateur casters) went to Blizzard campus on Wednesday for meetings. This wasn’t my first time being on their campus, but if you haven’t been — find a way to get the tour. I still feel like a kid in a candy shop every time I get to go up there.

Wednesday evening we were shuttled back into Los Angeles in advance of the studio prep day. We had some time to relax and get settled in that night, but Thursday and onward was the main event. 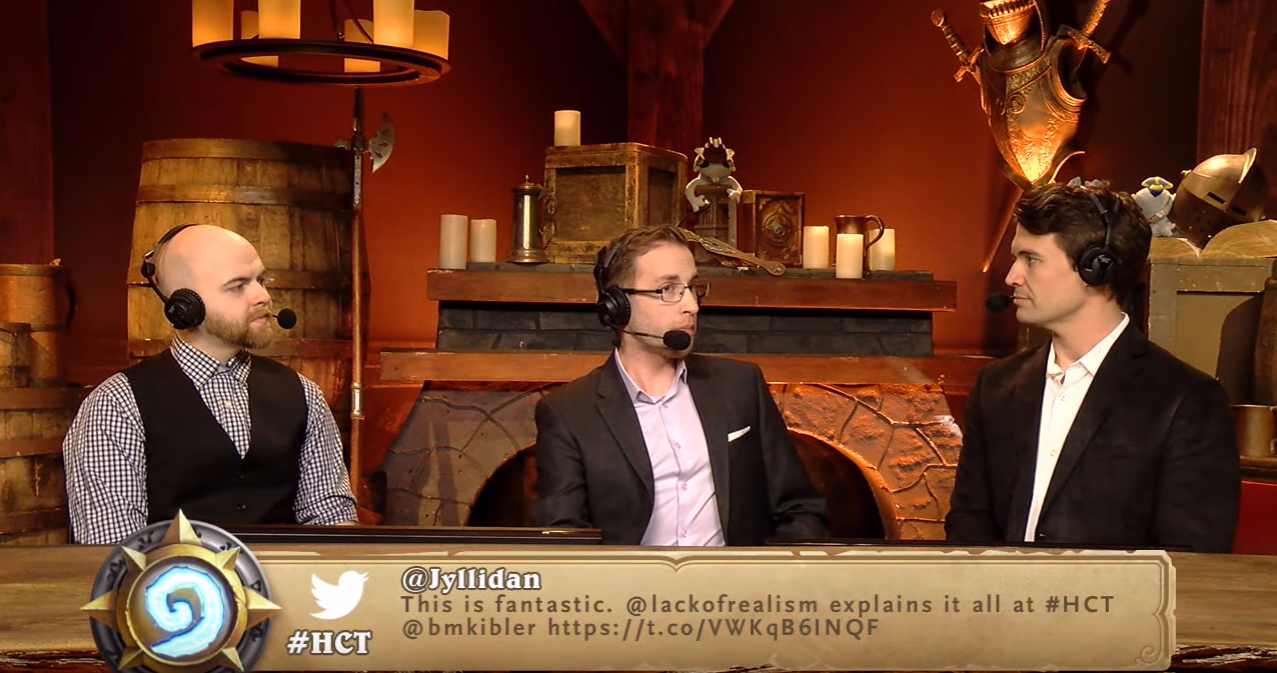 Early Thursday morning, we were off to the ESL studio. We were joined by Brian Kibler (who most people know from his Magic: The Gathering background, but I knew due to our old-school World of Warcraft connections), the inimitable Frodan, and TJ Sanders. All of them were amazing to work with, for totally different reasons. Frodan has a stranglehold on the way to host events and keep conversations flowing at an appropriate pace, while feeling totally organic; Kibler is one of the brightest minds in collectible card games (CCGs) out there, but legitimately values perspective from the people he’s working with and around; and TJ was a never-ending font of incredibly detailed information about all of the players we would be covering.

Our day in studio on Thursday was only probably six or seven hours – you’ll understand how short this is soon! – so we left early that afternoon to get back to the hotel and have some time to prepare for the broadcast. I can’t speak to other broadcasts or teams, but Cora, Raven, and myself, along with help from TJ, spent the whole rest of that day going through the list of players exhaustively and making notes. We didn’t look at the players’ actual decklists, despite having access to them, because we didn’t want our knowledge of the lists to taint the broadcast or provide information to their opponents that wasn’t made available in their games or on the stream. All in all, I’d say we spent another probably six hours on this preparation.

That takes us to Friday, and the beginning of the Americas Winter Preliminary. Friday and Saturday were both long days – starting early in the morning, and running easily 10-12 hours apiece. (If you didn’t catch the event, the full broadcast is available on YouTube.)

You can watch the videos to see what happened on the set, but some of the cool stuff – and certainly what I get asked about the most – is what was going on off-camera. A lot happened in two very fast days, so I’ll try and summarize the highlights as best I can:

If you have more questions, feel free to hit me up in the comments or on Twitter. I’m more than happy to talk about the whole experience!

What did you learn?

Honestly, so much. Being in a studio environment is so different from both the casual, everyday home streaming experience, but also a hugely different kind of work from being on a stage in front of a crowd. All of the public speaking experience in the world didn’t equip me for talking to a camera in an empty room, even knowing that there were 50,000 people on the other side of it.

I have worked on lots of the skills that were required to be a part of this kind of broadcast — pacing, tone, inflection, etc. — but I’ve almost exclusively been in environments where I gave brief, concerted speeches, generally while standing and with a live audience. I gained a tremendous amount of respect for guys like Frodan, whose presentation stayed consistent and easy to understand, even when he’s sitting or after seven or eight consecutive hours of being at it behind a desk. 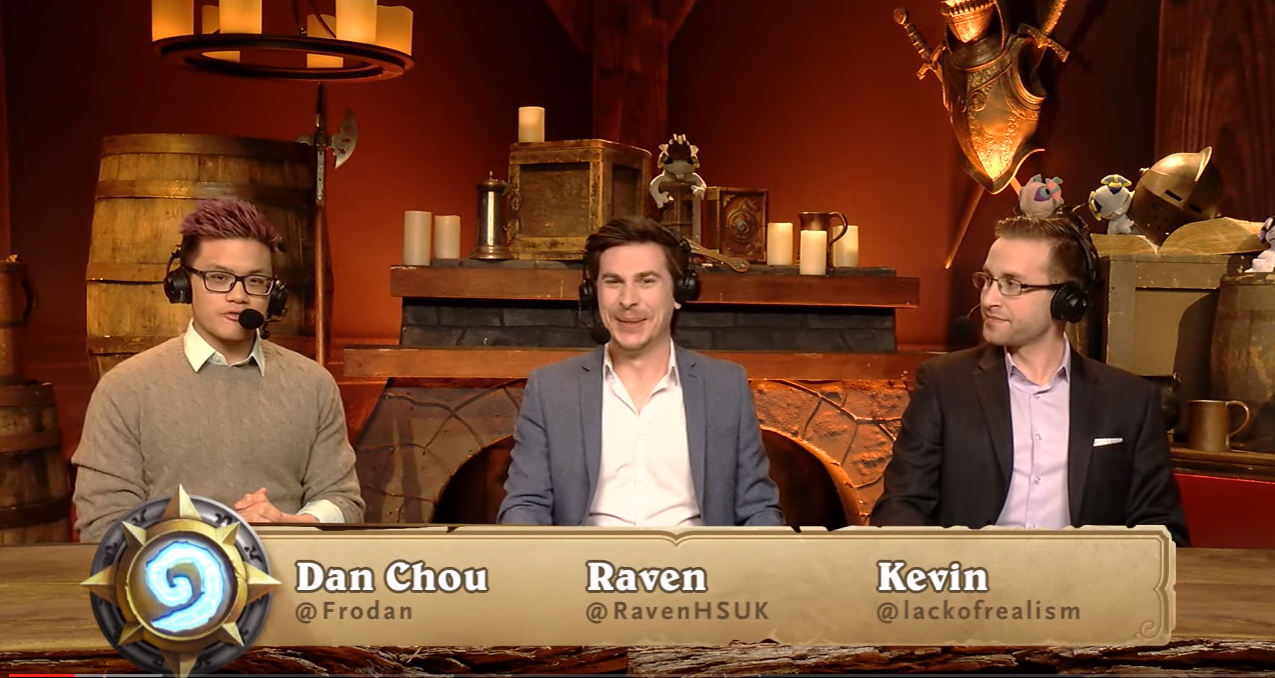 I’ve got lots of growing to do in being a better player of the games, but also of having the knowledge base of the players — who they are, where they’re from, what they’ve accomplished — and the scene. We did a ton of research for our broadcast, but I’d like to come even better equipped to future events. Everyone (myself included) came armed with notebooks and laptops and did as much preparation as they could, but I don’t think anyone ever feels like there wasn’t more they could have done.

Plenty of people were immensely encouraging — fans, viewers, and even the other casters and production staff — but I know I can do better. The thirst for improvement was something every member of the talent team had, and I don’t think I walked away with anything other than a desire to push myself harder to be even more focused next time.

Will you be casting again in the future?

I would love to. I’m hoping to do more work with Hearthstone, whether within HCT or at third-party events, and also hoping to branch out into other games, as well! My esports career started on the back of a lot of content creation and coverage of pro StarCraft, which I still love, and I have been putting lots of time into Blizzard’s other titles (especially Heroes of the Storm), as well as trying to learn some of the other popular games out there right now from other studios.

I hope this was an informative look into what the whole of my first time as a ‘professional’ esports caster was like, and look forward to being involved in many more events! Thanks for reading, and if you’re hoping to see me on the desk again — keep following pro Hearthstone.