Lost Reavers is a bad game.

By nearly every measurable standard, Lost Reavers — a free-to-play, online-only, multiplayer action-adventure title from Bandai Namco and exclusive to the Wii U — is a subpar, repetitive, and badly crafted game. But even bad games can be somewhat worthwhile.

What could have been a unique multiplayer take on an Indiana Jones-esque adventure instead is laden with problems, both large and small, and calls to mind examples in other forms of media where the end result is just so bad, it almost comes full circle to being enjoyable. Lost Reavers is the trashy novel you never admit to your friends that you like. It’s an awful movie you watch, just to see how badly put together everything is. I got an odd enjoyment in watching it not work.

Lost Reavers takes place in the year 2075, as humanity struggles to find a new energy source. They’ve turned to powerful Relics (which this game claims aren’t inexhaustible and won’t solve the world’s energy crisis, but whatever) that only certain people — know as the Lost Reavers — are able to collect. So, with the help of a space-time (because, of course) teleportation system, people are now being sent in the past to recover these Relics and somehow save humanity.

No, I’m not making it up. That’s the basic, thin premise of plot that’s thrown at the player in a scrolling-way-too-fast introduction, before vanishing into the background and (so far at least) never mattering much again.

I’ve been playing through Lost Reavers the past few days, and am just about to reach level 18, but want to keep running it through the paces over the next week or so before I assign it a final score. Here are my initial treasure-hunting impressions so far.

I’m a sucker for treasure hunting and all things Egypt, which is probably why Lost Reavers (originally Project Treasure) caught my interest in the first place. It has a sense of mystique (mostly because everything is an odd mashup of ideas that it doesn’t really explain and don’t make sense), but I am curious to see if the story comes back any at all, but it’s possible I like the idea of the game more than I actually like what I’m playing.

It has four playable characters: I’ve been playing with as Sayuri, a girl with a sword and a gun (because that makes sense, right?). The others are Dwayne, a heavy weapons expert; Victoria, another girl with two guns; and then Shadow Stalker, who looks like he was torn out of Mad Max. Each character supports a different style of player, and the somewhat interesting thing here is that you can actually switch between camera styles for the different characters. That’s kind of cool, at least.

The longer I played Lost Reavers and the more it just didn’t work … the more it became like a bad joke. I’m wasn’t surprised when something went wrong, and I settled in to what I realized was going to be an awful game. Despite its numerous problems, I still don’t hate it for how bad it is. The treasure-hunting premise itself is probably stronger than anything the game actually does with it, but I did find a little excitement as I explored.

But it manages to stretch this idea out as thinly as possible, and to me, playing it feels oddly similar to watching a bad movie just to see and enjoy it for how bad it actually is. I’m not mad at how bad Lost Reavers is, it’s become humorous and almost enjoyable in a low-budget B-movie kind of way.

Yeah, well, when the fact that a game is free is one of the better things about it, it does put the rest into perspective? So far, I’ve managed my way without having to pay anything (I’ll talk about the microtransactions in a bit), but there’s just different expectations for a game when people don’t have to put any money into it. 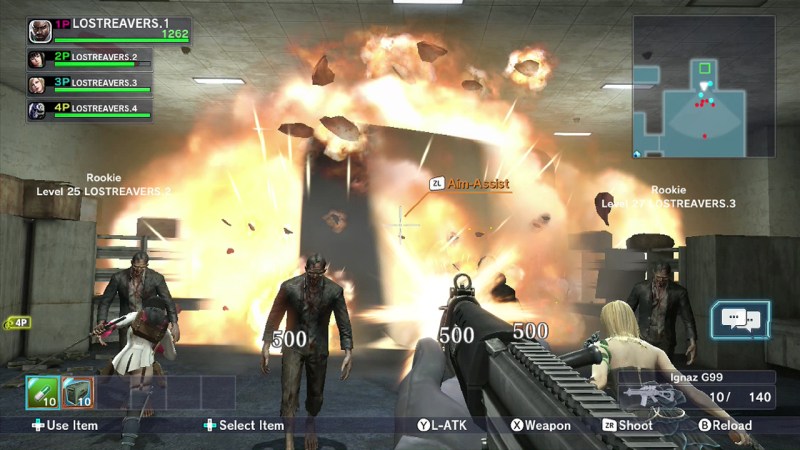 Above: Lost Reavers offers both first-person and third-person modes for certain characters.

It’s tricky to pick exactly where to start with what’s wrong with Lost Reavers. Well, it’s an online, multiplayer cooperative game without voice chat, which means you could be stuck spending the entire session trying to convince the other players on your team what to do via preset text prompts.

The irony is that the puzzles are all entirely the same, so you don’t really need to worry about coordinating with other players often. Every puzzle comes down to doing one thing and one thing only: standing in front of whatever you need to hack or push or decrypt and holding the A button. That’s it. It’s almost insulting to even call them puzzles or challenges in the first place, but here we are.

One of my biggest problems so far is just how broken Lost Reavers can be at times. Multiple times, I’ve simply lost my ability to attack for seemingly no reason — sometimes it’s my sword, sometimes it’s my gun, or sometimes it’s both — which is a big enough problem. But the biggest recurring problem is either the bad camera system or online lag, and I honestly can’t tell which it is. The best way I can describe it is my character is often “jittery”: I’ll be moving somewhere only for the game to glitch and my character to be somewhere else on the screen. I’ve fallen off ledges only to miraculously appear back on them, glitched so I was running into a wall instead of through a doorway … it goes on and on.

What else have I seen? Zombies walking up walls, zombies floating through the air, zombies that will walk right past me, zombies that won’t react to my attacks and then still keep walking past me, and zombies that will just stand there and not attack anything. Items stuck up in the sky. I’ve spawned into a lobby only to be locked into a first-person view (which my character doesn’t have), then for the camera to return to my character briefly before kicking me from the room. Like I said, Lost Reavers is a mess.

Do you enjoy playing the same short (roughly five-minute long) levels and basically non-existent puzzles over and over again? Yeah, I didn’t think so. Lost Reavers only has two levels at the start: the Ancient Ruins and the Research Facility.

Each level consists of a few short areas — separated by several annoyingly forced “loading zones” — where you’ll have to battle zombies, mummies, and for some reason, bugs. You’ll eventually unlock harder, higher-starred versions of those two levels, which so far retain the same layout and structure, just with a few more enemies thrown into the mix. (I do want to note that a few times some of the levels have taken slightly different paths. I’m not sure if the rooms are sometimes randomly switched, but for the most part, they’re the exact same levels.)

But wait! There’s more! You do unlock two additional levels at level 10 called the Ancient Ruins: Underground and the Research Facility: Basement. Yup. The Ancient Ruins: Underground level actually rips one of the same exact rooms from the previous Ancient Ruins level, so again, expect a lot of déjà vu, but at least they are different levels. There’s apparently also a castle level somewhere … but given how sparse everything else is, I wouldn’t expect much.

And that’s the basics.There’s a small amount of content to pick from, and you are tasked with replaying it constantly to level up. There doesn’t seem to be any end point or end goal or win state, just leveling for the sake of leveling and to play slightly harder versions of the same areas you’ve already played ad infinitum.

Oh, and what about new weapon unlocks? Mostly random, as well. You can find them in missions, but at any given time there are three different weapon crates you can try to unlock using analysis chips. You can purchase these chips with real money, find them in missions, or use in-game currency to trade for them … to then have a random chance at unlocking the crate and getting the weapon within. I’ve only managed to get one other sword for my character so far … le sigh.

Even worse, you are essentially playing each level twice because once you find each level’s Relic, someone on the team has to (slowly, and now with a disadvantage) haul the Relic back to the starting point. It’s bad enough that the levels are short, but it’s even worse when you realize that Lost Reavers is already using the cheapest back-tracking trick in video games to try to make them feel longer.

There are bosses — two it seems — but my encounters with them so far have been the definition of bullet-sponge territory, down to the pretty much one-hit-KO moves. I’m going to come back and try them again at higher levels, but right now they have destroyed my team every time.

Lost Reavers is a bad game, plain and simple. It’s repetitive, broken, glitchy, full of problems and empty on content. But yet, there’s still something about it that intrigues me. I’m kind of into it, and it isn’t so bad that it’s actively making me hate myself for playing it, either.  It’s bad in a crappy B-level movie kind of way, and I have a strange affinity for it that the game probably doesn’t deserve and I just can’t place. But I don’t hate it … yet.

Lost Reavers is now available as a free download for the Wii U. GamesBeat downloaded it from the eShop for the purposes of this review.