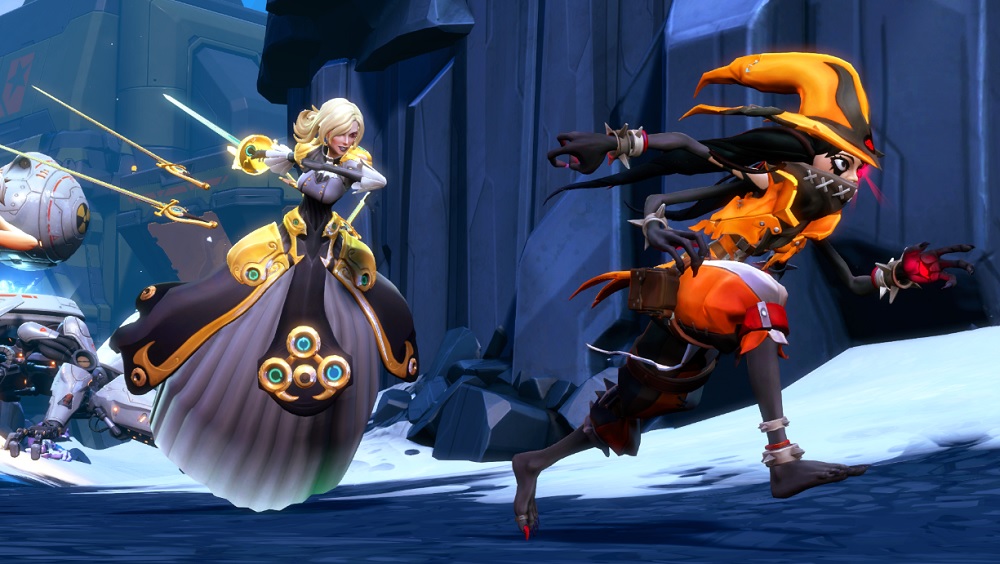 Above: Some of Battleborn’s character designs are better than others.

The brash sense of style

Battleborn makes a strong first impression with its stylish animated intro, giving you a taste of its world and characters while setting a dire tone for its conflict. The rest doesn’t follow up, and this does more to push me away than to endear me to it.

It embraces a sort of in-your-face style abrasiveness that betrays an insecurity. The writing is content to shine a light on storytelling conventions and call that clever; villains make declarations like “oh, this is the part where I tell you my plan, and you reject my offer?” But the plot doesn’t meaningfully deviate enough from convention to justify that awareness.

In multiplayer, characters are too busy showing you how “badass” they are to project any real personality. Characters will taunt the camera, do fist bumps, or commit other acts of “attitude.” I don’t mind aesthetics that reach beyond “grizzled military shooter,” but Battleborn’s style reminds me of a skateboarder flipping off a camera with their tongue sticking out more than anything else. I do like a few of the character designs, but most are too bland to stand out.

The sheer amount of “personality” Battleborn foists on players will force out strong reactions to it. If it rubs you the wrong way, it might turn you off to the game altogether. 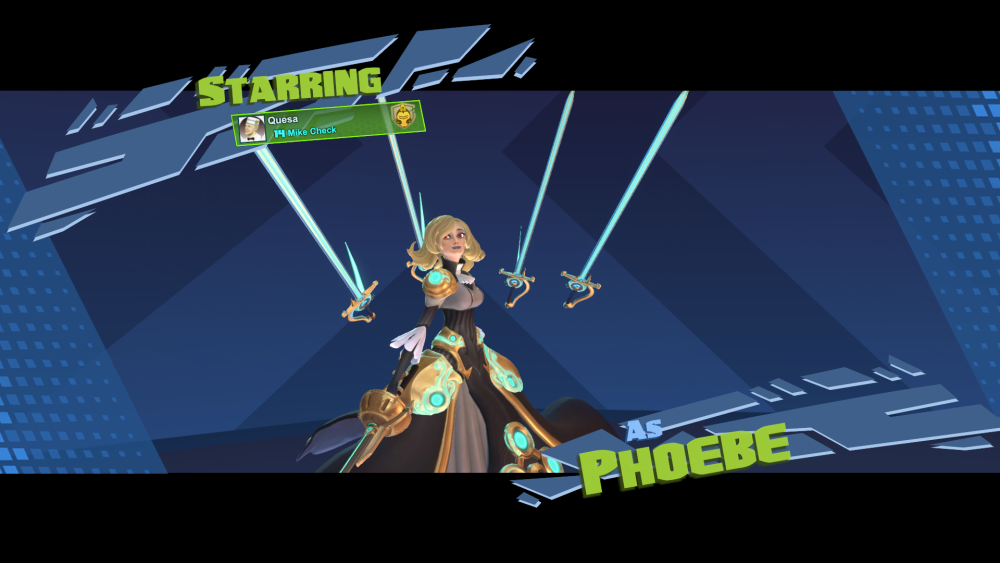 Above: Single-player missions have some stylish flair when they introduce your characters.

The more awkward parts of combat

As is the case with most MOBAs, Battleborn’s characters can take a beating, and getting kills can mean a lot of chasing opponents around corners and into dangerous territory. That might be standard in MOBAs, but Battleborn’s also a shooter. In MOBAs, the overhead perspective means whether or not you hit an opponent depends largely on whether you were in a position to do so and not on your aim. You might get a few cases where you don’t cast a spell in time, but if you click on something, it either dies or survives.

By being a shooter, Battleborn puts a heavier emphasis on being able to aim well consistently. I had more than my share of situations where I’d outplayed my opponent, was set to finish them off, but couldn’t get the last hit shot off to bag him. Melee characters have another problem; getting in close means you can get caught up in a sea of spell effects and lose your target.

Shooters are fast and lethal, rewarding twitch reflexes; MOBAs are a bit more calm, forcing you to tolerate your opponent’s presence for a few minutes before you can attack them. Battleborn finds a good balance between the two. 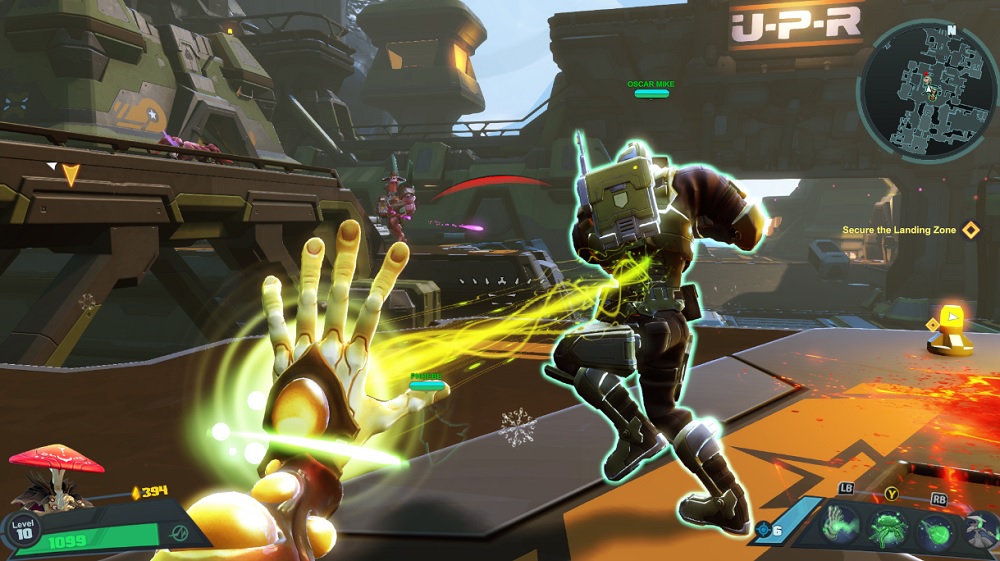 Above: Support heroes like Miko can help their team take objectives and fights without worrying about their aim too much.

The lopsided matchups between players and characters

I’m always changing my mind on whether MOBAs should have a surrender option. But Battleborn needs it, for all the wrong reasons.

Matchmaking values speed over accuracy, so I ended up in a lot of lopsided matches. There tended to at least one person with a much higher player ranking than everyone else in every match I played, and they were usually the one who made the highest impact, winning matches almost by themselves.

Character picks also tend to be lopsided. You can’t see who the enemy is picking, which means everyone tends to pick the most well-rounded heroes over more situational ones. And you only get one support character in the initial batch of heroes you have when you first start playing, which makes the role less enticing to play and makes many random lineups less balanced. Finally, I’ve had consistent issues with people dropping out before and during matches, which leaves a team down one or more players.

In MOBAs, it can sometimes feel like you’re holding back a loss for the entire match, and both of these issues make that worse. The matches may not last as long, but they can still feel like you’ve lost in the first few minutes either because the enemy has a ringer or because you don’t have a balanced team. I’ve had a few inspiring upsets, but most matches tend to reveal who the winner will be pretty early on.

In Battleborn, I’m glad I can call for my team to surrender, and I feel bad about saying that.

The single-player levels are do-or-die

As of right now, each of Battleborn’s single-player levels don’t leave much room for error. Any time I fail a mission, I’m sent to a stats screen, as if I’d finished a multiplayer match. You’ll find a few checkpoints in each mission where you’ll respawn if your teammates don’t revive you, but if you fail an objective, that’s it. Start over.

I get that these missions have to provide a good enough challenge to make them repeatable, but even Destiny’s toughest raids have checkpoints in them. Additionally, at least one story mission has been giving players enough trouble that Gearbox has said they’re looking at making it a bit easier.

Above: One of Oscar Mike’s talents gives him a scope, but doesn’t make his gun look any better.

In competitive games, polish matters. It might be shallow to say, but a large appeal of why I love some of favorite games has to do with the small details, like how in Dota 2, characters’ running animations change when they grab a rune that makes them move at top speed.

Battleborn lacks those special details. Most characters seem like good ideas hamstrung by a budget; several guns look like toy pistols you might find at a discount flea market, and their models are too bland to really express much personality.

I found a few other small annoyances, like how you have to toggle the character upgrade menu on an off to allot your points, or how if you want to play single-player missions on Advanced difficulty, you can’t do it through matchmaking. The menus also lack a certain polish, which is especially strange given the focus on random drops and leveling systems. And right now, there’s a strange bug that allows certain characters to shoot objectives through walls, breaking the balance of Incursion to some degree.

These aren’t deal-breakers, but they prevent me from falling in love with Battleborn as much as I otherwise would.

Despite my issues with it, I’m having way more fun with Battleborn than I thought I would. It took a while, but I’ve managed to find a couple of characters whose playstyle I really like, and that’s enough to keep me going for a while longer. And I’ve had enough exciting matches that I see its potential.

But it assumes its fundamental conceit is good enough that you’ll spend dozens of hours unlocking its full potential. It layers on this cocky attitude in its characters, its look, and its story, but cuts too many corners to earn that attitude.

And in a market crowded by better alternatives, I don’t think confidence is enough to win this fight.